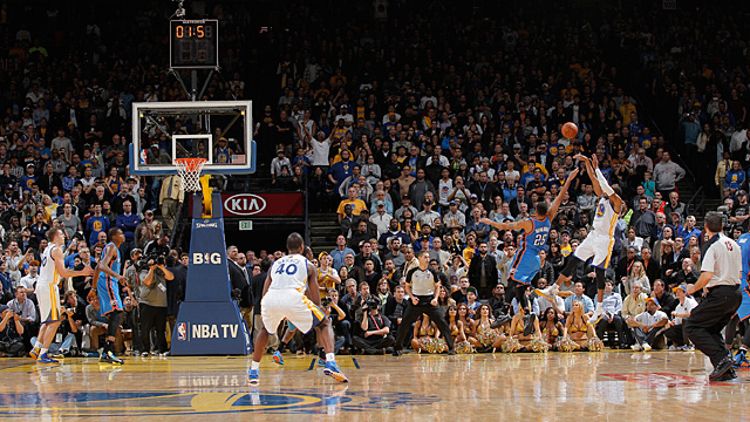 Man, this has been a weird little season so far. Everybody looks terrible on the second night of back-to-backs, and back-to-backs are happening all the time. Miami looks human, Indy looks unbeatable, Brooklyn looks old, J.R. Smith hates Brandon Jennings, and the tank division — Phoenix, Charlotte, Philly, Orlando, and Boston — is actually pretty good. I was getting a little confused by it all. Then, on Thursday night, the Thunder visited the Warriors. All night, Kevin Durant, Russell Westbrook, and Serge Ibaka battled David Lee and the Splash Brothers in front of one of those electric Golden State crowds that make most gyms look like mortuaries.

For the Thunder, this game unfolded not unlike Wednesday’s Clippers game. They looked awesome with their starters and then lost ahold of the proceedings in the transition between the third and fourth quarters. Yo, Scott Brooks: You keep winning games, but I kind of hate your rotations. Sincerely, a guy who went to St. Joe’s basketball camp 20 years ago. Seriously, though, against the Clippers, KD and Russ entered the game with nine minutes left in the fourth quarter, down 12. Against the Warriors last night, they entered the game with 8:50 left, down 11. These dudes are really good, but do they always have to close games in debt?

Anyway, Russ and Kevin got things close, Ibaka made some clutch free throws, and Reggie Jackson had a nice finish to get us to the final seconds of the game. Then, with his team down two, Westbrook got the ball somewhere out in Marin County. He did not have the clearance to buzz the tower, but what do we know?

Finger-guns, you dummies. When you see something like this — hell, when you see how Russ has done early-season, triple-bypass surgery on his struggling team and brought them back to life — doesn’t that just wipe away the memories of all those terribly timed 17-foot pull-ups? It does for me. The past is the past!

Speaking of cardiac arrest, on the next play Andre Iguodala proceeded to slap Thabo Sefolosha’s “defensive stopper” reputation around a little bit, slipping backdoor on him and hitting a fading-right baseline jumper to win the game and send the Oracle fans into Jesus Camp mode.

That was Iggy’s fourth buzzer-beater in the last 10 years, tying him with Kobe, Paul Pierce, D-Wade, and AGENT ZERO. There were a lot of great celebrations. I personally liked Durant shoving Westbrook, above. But after the Iguodagger, you had Warriors owner Joe Lacob rushing the court:

And Iggy leaving a bunch of the dot-com homies hanging …

(Special thanks to CjZero, who did some great GIF work last night.)

Anyway, this was my favorite game of the year: a fast-paced, high-scoring, dramatic game played by two of the most exciting young teams to come along in years. These two teams need to meet again in the playoffs, preferably in the conference finals. Here’s why:

• They both play in arenas that can get hysterically loud. It’s been a while since I can remember a Cameron/Dean Dome kind of atmosphere for an NBA playoff series, where both gyms are rocking every night.

• We would probably, by osmosis, all become better shooters, just by watching Klay, Steph, and Kevin.

• We would probably, by osmosis, all become better decision-makers, just by watching Russ.

• We’d get to see Jermaine O’Neal and Kendrick Perkins scowl from the bench and not participate in team celebration activities.

• All our degenerate friends would liquidate their unborn (or born!) children’s college funds while betting the overs.

• We’d, hopefully, get more moments like the last 30 seconds of last night.

In a season when so many teams are actively trying to play badly, and some of them can’t even get that right (SIXXXERS!), this prospective Dubs-Thunder matchup in the spring is a reason to keep going. Come on, Adam Silver, make this happen.