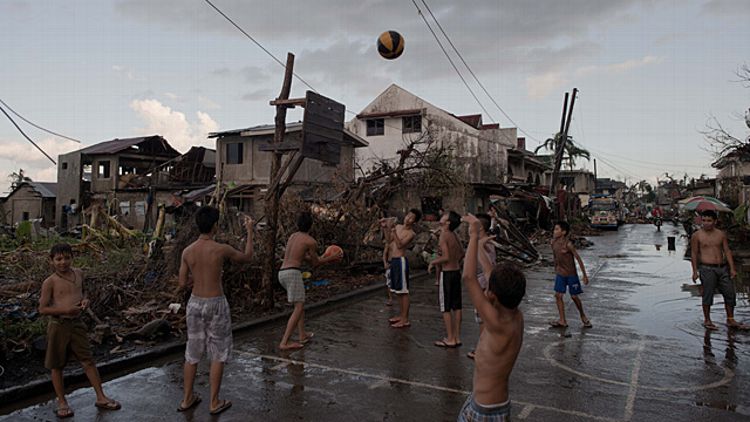 There’s not much to say here. Almost two weeks ago, Super Typhoon Haiyan — called Yolanda in the Philippines — made landfall, laying waste to coastal areas in Eastern Samar and Leyte provinces and leveling much of Tacloban City, a regional hub where more than 200,000 people lived before the storm. It was one of the most powerful — possibly the strongest — storms to make landfall since weather satellites became capable of measuring hurricane-force winds. Thousands are confirmed dead; thousands more are missing. The images and stories of the storm’s aftermath stretched our imagination — it was the kind of devastation the CGI masters behind science-fiction films strive to imagine, only it was harrowing and gut-wrenching and real.

The situation remains dire, but the Philippine government and the international aid effort have managed to stabilize the storm-hit areas and begin to rebuild what can never be totally restored. And with that, some extraordinary images of otherwise ordinary, everyday life started getting passed around on social media yesterday.

It started with a moving essay by the Associated Press’s Todd Pitman, who happened across a half-court basketball game amid the ruins in Tacloban. “The basketball goal was one of the first things this neighborhood rebuilt,” he wrote. Before long, Twitter and Facebook were lighting up with images of Filipinos playing hoops in the wasteland, capturing the country’s intense love for the sport and its people’s awe-inspiring resilience. Photos like these have actually become a recurring meme in the wake of disasters — shots of men and boys playing ball in chest-deep floodwaters after August’s Tropical Storm Maring and 2009’s Tropical Storm Ondoy enjoyed similar viral runs through the Internet and are now imprinted in the minds of many Filipinos who remember those trying times and all the strength it took to bounce back from them.

Basketball is not going to rebuild Tacloban or Guiuan or Bantayan Island or Roxas City or any of the other towns that suffered from Yolanda’s wrath. But it will help people heal.

Yesterday’s images even caught the attention of Warriors forward Harrison Barnes, who devoted a Facebook status to the Philippines that captured the power behind these pictures in such simple and eloquent language that I think it should be the last word in this post:

We all play this game of basketball for different reasons but to see it as a form of healing in a time of need is the greatest reason I’ve seen yet.

Below are a selection of basketball-related images from the aftermath of Super Typhoon Yolanda and previous storms that have affected the Philippines.

Another post-Yolanda bball photo that I hadn't seen yet. Shared on FB by RG Gonzales. Just amazing. pic.twitter.com/JJMh4zgstg

What Has Happened to the NFL's Running Game?