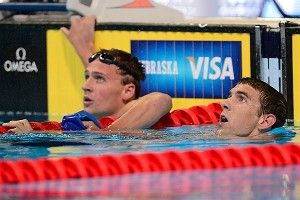 Regardless of whom you favor, we’re going to be hearing a lot from these guys in the next two months. On Monday at the U.S. Olympic Trials, Lochte beat Phelps in the 400-meter individual medley, a race in which you have to use four different strokes: freestyle, frantic doggie paddle, lying on your back trying to catch your breath, and screaming for the life guard. Or, if you’re not me, butterfly, backstroke, breaststroke, and freestyle. It doesn’t matter. What does matter is that the 1-2 finish ensures that both will compete in the event in London, and that Phelps won the gold medal in this event in the last two Olympic Games; 2008 in Beijing, 2004 in Athens. Overall, he’s won 14 gold medals and two bronzes, including the record-breaking eight golds in his incredible Beijing run. He’s won the most gold medals in Olympic history, and his 16 total medals are second only to the 18 won by Soviet gymnast Larisa Latynina, who, at age 77, should be thought of as America’s last major Cold War enemy.

But Lochte has put a serious dent in the Phelps domination narrative in the past year. Monday’s win was the first time he’s ever beat Phelps in the 400 IM, a defining moment in their rivalry. At the 2011 World Championships in Shanghai last July, Lochte took five gold medals, and two of them came at Phelps’s expense: the 200-meter freestyle, where he won by .35 seconds, and the 200-meter medley, where Phelps’s personal best wasn’t enough to beat Lochte, who set a new world record.

At 27, with the recent wins over Phelps under his belt, Lochte has a certain amount of swagger. He told ESPN The Magazine that he hasn’t been nervous for a swimming race since he was 8 years old, and even unleashed this slap-in-the-face-with-a-white-glove quote: “Once I beat someone, they won’t beat me again.” He already has endorsement deals from Gatorade, Ralph Lauren, Gillette, and Speedo.

But the shadow of Phelps still looms. There’s a claustrophobic myth to overcome, and so far, “all” Lochte has done in the Olympics is win a single individual gold (to go along with three golds in relay events, and two individual bronzes) — a world-record-breaking swim in the 200-meter backstroke in Beijing. But he’s chasing a legend. Along with all the records, Phelps was involved in what I consider the two most iconic moments in American swimming history. My second favorite was the seventh gold medal in Beijing, courtesy of a miracle finish in the 100-meter butterfly:

I wasn’t alive in 1980 for the Miracle on Ice, so there are very few defining Olympic moments where I can remember exactly where I was and exactly what I felt. For this one, it was a bar in Burlington, Vermont, and the whole place was going nuts for those 50 epic seconds. When it looked like he lost it by a nose at the end, silence, and then an incredible eruption when the U.S. flag graphic came up at no. 1. It was the kind of sports delirium you just don’t expect in Vermont, of all places, and soon the whole place was chanting “U-S-A.”

Great as that was, it couldn’t compare to the 4×100 freestyle relay. This time, Phelps was on an early leg, and had to watch while Jason Lezak attempted to chase down the fastest swimmer in the world, Alain Bernard, who would win the gold medal at that distance just days later (and who, by the way, said his team would “smash” the Americans). Phelps’s record was at stake, and the American situation looked really, really hopeless.

No joke: I come back to this clip every couple weeks just to get goose bumps all over again. The race is inspiring enough, but I think Dan Hicks and Rowdy Gaines delivered a great call at the end. “But Lezak is closing a little bit … ” “There’s no doubt that he’s tightening it up!” It makes me want to weep red, white, and blue tears. Which is impossible, at least until science catches up with the times. Until then, the best I can do for you is my impression of the French after they lost … oh wait, I forgot that you can’t see my face. Take my word, it’s very funny.

It’s impossible to forget what Phelps has done, or to stop wondering if he can do it again. Yes, he’ll have to make up a lot of ground if he plans to challenge Lochte in London, and yes, logic and recent results tell us to go with the new guy. But after Phelps famously lost his focus following the 2008 Games, the word is that he’s regained his edge and could round into peak shape just in time for London. He and Lochte will meet twice more with Olympic berths at stake; first on Wednesday, in the 200-meter freestyle final, and then again Saturday, in the 200-meter medley final. If Lochte wins, he’ll obviously be the favorite to win the gold. It’s hard to know exactly where else they’ll turn up this week, since swimmers apparently “sign up for more events than they intend to swim as a psychological ploy,” but it’s a safe bet that their rivalry will be the major story in London.

So, who you got? Lochte or Phelps?