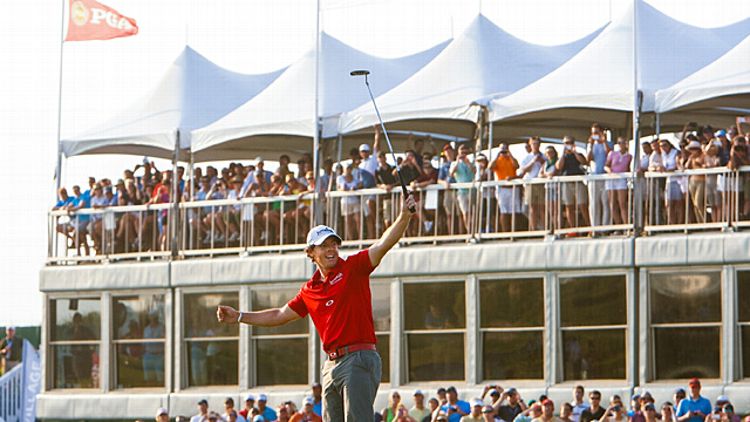 Norm Macdonald made two big New Year’s resolutions. One was to start writing pieces for Grantland. The other is going to be revealed on Friday in his second piece for us. Today, he shares his thoughts on the 2013 PGA season.

Lefty beat Tiger by nine strokes on the final day at Pebble, winning his 40th PGA title. Eight weeks later, it was looking to be Phil’s year, as he was in the Ultimate Game on the final day of the Masters. But it all came apart when Phil carded a triple at the par-3 fourth, with the victory eventually going to another southpaw, the guy everybody loves to love, Bubba. Even Billy Payne looked happy to be presenting the green jacket to a man who had just cried like a woman.

At the Open, Ernie Els only led once and it was an hour after his last putt. He felt kinda bad about it. Adam Scott felt kinda worse.

Tiger, reinventing his game yet again, served notice that he was keeping the wolves of irrelevancy at bay by winning a sort of Legends Slam: first Arnie’s tourney, then Jack’s and finally his own.

Jason Dufner went on a short and exciting winning streak of his own before deciding to marry and cut out all that winning nonsense. It was quite a year. Even Sergio managed a win. This after holding the oddest presser by any athlete ever, directly after the Masters, where the young Spaniard announced to the world that he was a washed-out bum. “I need to play for second or third place,” he said. Had Jim Kelly made such an announcement in 1990, he would be considered the greatest QB in history.

And then? The PGA Championship. And Rory. On August 12, 2012, the game of golf changed. The doubters were silenced and a young man who should have been given his due long ago finally got it. Rory won major no. 2 (16 to go) by eight strokes. Rory wins all his majors by eight strokes, incidentally.

So that was the season, except for the embarrassing annual spectacle of the Fedex Cup, a ridiculous playoff system that no one understands, only it somehow awards $10 million to the winner (who more often than not has no clue he’s won). Before his timely death, Ed McMahon used to present the oversize check. But the golden year of golf breathed life into even this moribund thing. Rory won the two playoff events going into the Tour Championship, making the final event of the year slightly less unwatchable.

For the record, Brandt Snedeker won that misadvertisement for the game of golf and had a fine season, too, as did players like Webb Simpson, Luke Donald, Justin Rose, Lee Westwood, Dustin Johnson, and many more. It was the deepest, most talented field in the history of the game.

Which made what Rory did in 2012 all the more spectacular. Remember, when Tiger appeared on the scene some two decades ago, he was paired with the likes of Duffy Waldorf? It was like watching Rebel Without a Cause and seeing Jim Backus trying to keep up with James Dean. Last year, week in and week out, there were a good 25 players that had great game. But Rory was always the one being chased. Surprisingly, the one doing the chasing was Tiger Woods.

And just when you thought the year was over, the Miracle at Medinah happened. Olazabal, with Brookline on his mind and Seve in his heart, believed his way to a victory for Europe in the greatest Ryder Cup of all time. It was a fitting capper to the golden year of golf.

So what should we expect in 2013? You might think there will be a changing of the guard, but that’s the thing: The guard already changed. Mickelson, Els, Stricker, Furyk, et al. … they are done. (Wonder what et al. means.) Of course, Tiger is still an ongoing concern/curiosity, and many golf fans hope a rivalry has been born that will effectively turn every tourney into a Rory-Tiger shootout. This won’t happen. There’s way too much talent out there. However, I see an elite threesome emerging this year and winning at least eight tournaments among them. And I see two other golfers that will come very close.

Here, in reverse order, my list of the five most successful golfers in 2013:

5. Dustin Johnson
DJ was injured most of last year and couldn’t do much. And in 2010, when he had his best chance to break out, Dustin was more snakebit than a Pentecostal minister with palsy. But he’s the real deal and 2013 should be the slacker wunderkind’s bet year yet if he stays healthy. Watch out for him at Pebble.

4. Tiger Woods
Tiger Woods has proven you can be the greatest and most prolific in two things at the same time. And he continues to be the hero of every red-blooded American boy, regardless of what Gloria Allred wants you to believe. The greatest athlete who has ever lived is also the bravest, and continues the complete overhaul of his game for the fourth time. If he wins, it will be on the ground and not in the air. It will come down to putting. Bottom line: Doubtful he will be better than last year. But I pray I’m wrong. I’ll never not root for him.

3. Keegan Bradley
Within spitting distance of Rory and he knows it. Outside of Tiger, he is the most competitive man in professional golf. He also has the advantage of using an illegal putter. He’ll be the man to beat this week.

2. Rory McIlroy
The greatest player in the world. So why haven’t I selected him as no. 1? First, there will be an inevitable hangover after “My Favorite Year.” Second, Tiger has become his friend, and Tiger does everything for a reason. Third, Rory likes to go on talk shows and attend premieres and tweet-pic adorable pictures of Caroline and himself reading his press. Fourth, at the Ryder Cup, the Holywood Kid slept in and nearly missed his tee time. Rory McIlroy was beginning to look like Roy McAvoy. But fifth, and most important, there can only be one player of the year. And that will be Louis.

So that’s it. Oh, and also I very much like Freddy Couples at the Masters. You heard it here.