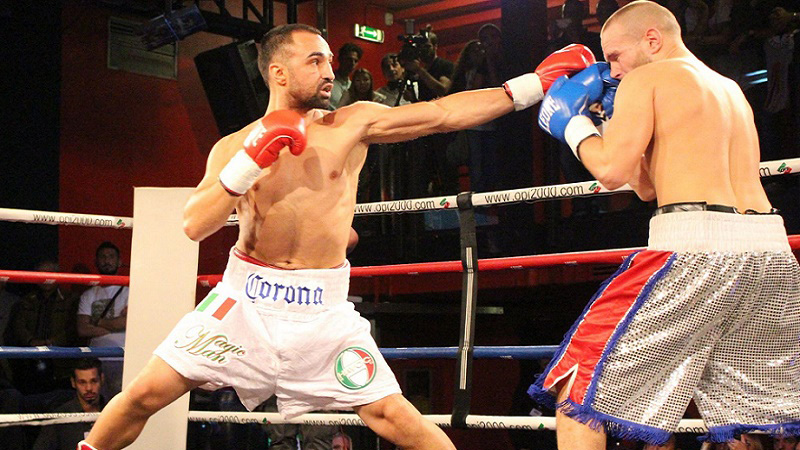 On the fourth day of Milan Fashion Week, Paulie Malignaggi arrived at the Dixieland Café, a “Tex-Mex restaurant and American bar,” on the Piazzale Aquileia. He stripped down to his underwear, a pair of gray boxer briefs with a red Gap waistband, and stepped onto a scale. Like many of the city’s visitors that week, Malignaggi had been on a punishing diet, losing 25 pounds over three weeks as he cut weight for his Italian boxing debut. The fight — a possible farewell for the former 140- and 147-pound titlist — was supposed to be a cakewalk, but the conditioning had drained him all the same. A week earlier, en route to a brief training camp in Málaga, Spain, Malignaggi was stranded at the Madrid airport and nailed his grievances to the airline Iberia’s Twitter feed. When a follower mocked his bellyaching, Malignaggi snapped: “Dipshit u try starving n dying of thirst while making weight then dealing with all this on top of it.”

Malignaggi spent his first two days in Italy in his hotel, but his spirits had lifted by the time of the weigh-in on September 25. He was speaking even faster than usual — in fluent Italian, no less — and his entourage of Brooklyn homeboys and Sicilian family members wore custom T-shirts with slogans like “Coming Home.” Malignaggi had trimmed his black hair and beard as short as his Sharpie eyebrows — a mature look for a guy who had previously stepped into the ring with a red mohawk, a blowout of frosted tips, and a mane of Predator-style extensions. For once, the most offensive personal style belonged to someone else in the room. His opponent’s trainer, a heavy Hungarian man named Zoltan Kiss, wore red capris and the face of Osama bin Laden tattooed on his calf. With limited English, he could only muster the cheerful explanation, “It’s a good picture.”

Dixieland festooned its walls with Budweiser and Jack Daniel’s signs, and someone had set an espresso machine atop an old cask barrel. The crowd consisted mostly of small and muscular men with buzz cuts and bushy beards, and they whooped when Malignaggi made weight, as though he had already scored a knockout. That was an unlikely outcome for the fight — Malignaggi had only seven wins by KO on his record — but no one gave his opponent, a Hungarian journeyman named Laszlo Fazekas, a chance. Fazekas’s record was 27-21-1, with all but one of his victories coming inside Hungary. Malignaggi, meanwhile, had fought world-class boxers like Miguel Cotto, Amir Khan, and Ricky Hatton. Even Kiss only put his fighter’s odds at “maybe.” The big question, according to Malignaggi’s Italian promoters, a family outfit called Opi2000, was not whether he would beat Fazekas but whether he would feel good enough in winning to continue with his career. 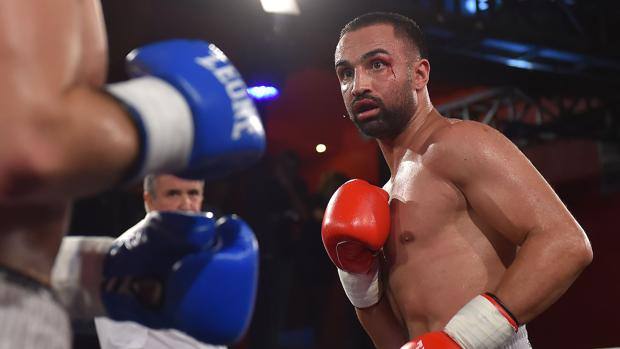 “Three weeks ago, this seemed like a good idea,” Malignaggi said after the weigh-in. It was hard not to feel sorry for a guy whose first big meal in Italy was a grilled chicken breast, a lump of white rice, and a bottle of Gatorade. Malignaggi is 34 years old, and the quick feet and crisp jab that helped him overcome his lack of punching power earlier in his career had slipped in recent bouts. He lost his previous two matches in the United States to Shawn Porter and Danny Garcia, younger fighters who charged through his punches and knocked him out. His professional record fell to 33-7.

Boxing fans love to beg aging fighters to retire, as if one last show of concern for the boxers’ health might pardon years of egging on the athletes’ suffering. But in Malignaggi’s case, the ritual seemed less disingenuous than usual. It turned out that his loud mouth was good for more than just trash talk: Showtime and Premier Boxing Champions have hired him in recent years as a ringside analyst, and nearly everyone praised his commentary. Now whenever Malignaggi fought, he seemed to jeopardize the wit and acuity that promised him a bright future on TV. After the Porter fight, he missed a Showtime broadcast because of a concussion. Still, Malignaggi came back to fight Garcia. As a commentator, he found it hard to spend so much time beside the ring while resisting the temptation to step back into it. During exciting matches, Malignaggi’s commentary could grow wistful. “I wish I was Carl Froch right now,” he said after watching the British champion slay George Groves in May 2014.

After the Garcia loss, Malignaggi said he wanted one fight in Italy to fulfill a lifelong dream. Born in Brooklyn, he had lived for six years as a child in Sicily. On Twitter, he called the Fazekas match a “small fight just to get a fight in Italy.” In fact, though, Malignaggi had his eyes on the European welterweight title, which belonged to a 45-year-old Italian boxer named Gianluca Branco, who was undefeated inside Italy but had lost his biggest bouts to Cotto and Arturo Gatti. Malignaggi’s Italian promoters said Branco had already agreed to the fight, but the European boxing commission didn’t want to give Malignaggi a title shot coming off the loss to Garcia. So it fished Fazekas out to get Malignaggi back on track. He just needed to win to get a shot at Branco.

The fight took place Saturday in a small basement theater in Milan called Teatro Principe — the type of tiny club in which Malignaggi started his career. The undercard was stacked with locals, and most of the fights were downhill from the moment the ring announcer sang out the boxers’ names: Renato De Donato, Francesco Grandelli, Alessandro Buratto. One fight featured an 0-3 fighter versus an 0-5 fighter, and the next fight featured the 0-3 fighter’s twin brother, who was 0-1. Kiss had brought along a couple of extra Hungarian boxers, who went down early against hometown favorites. If a light puncher like De Donato, who counted just one knockout among his 15 victories, could drop his Hungarian opponent, then could Malignaggi do the same?

Malignaggi wore white trunks embroidered with an Italian flag and his “Magic Man” nickname. He sang along to the Italian national anthem and came out boxing on his toes. He fought, like he had against Garcia, with his front leg forward, a position that created distance for his jab but also made it tricky to withdraw from fire. Fazekas countered Malignaggi’s first jab with a strong right hand. Malignaggi threw another jab, and Fazekas countered again. Was the Hungarian more game than everyone assumed? The shouts from Malignaggi’s corner suggested the fight hadn’t started quite as they planned: “Don’t force it.” “Relax.” “Nice and easy.” 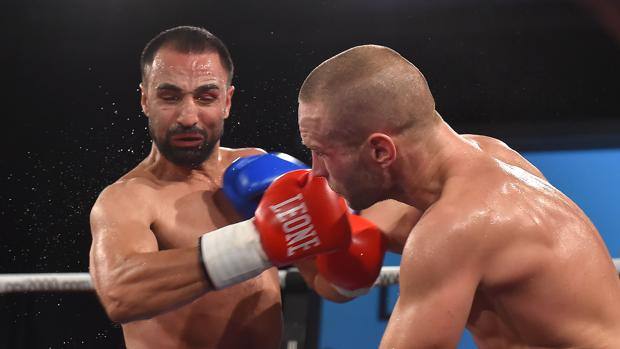 At the start of the second, Fazekas hit Malignaggi with his forearm, opening a cut on his left eye. Malignaggi has been cut seven times before, but he hadn’t expected a gash in what was supposed to be eight rounds of easy work. Fazekas was also hitting Malignaggi with rabbit punches on the back of the head — the type of illegal blows that can cause serious brain injury. Malignaggi still controlled the action with his jab, but when the bell rang to end the round, he spun toward his corner and rolled his eyes, like a bowler looking away from a gutter ball.

Fazekas was losing rounds, but even if he couldn’t win the fight, he seemed rugged and dangerous enough to derail Malignaggi’s path to the European championship. Then, in the fourth round, Malignaggi adjusted. He found his distance and started avoiding Fazekas’s counters. He stuck by his jab, moved in and out, and ducked incoming hooks and chopping right hands. In the seventh round, he dropped his gloves to his waist and wowed the crowd with some defensive showboating, slipping Fazekas’s punches like Keanu in The Matrix. He was too fast for his opponent, but he wasn’t really punishing him with combinations. He mostly stayed on his toes and backed Fazekas up with the jab.

Malignaggi won a unanimous decision, as everyone expected. Two of the judges scored it a shutout and the third gave Fazekas just one round. Malignaggi gave a postfight interview in Italian and then headed to the locker room. I found him there, sitting in his underwear on a white leather couch beside a cannoli in a paper bag. What was it like, I asked him, going from fighting at the Barclays Center in Brooklyn to fighting before just 500 people in a little club. “It was an old-school feel for me, like when I was coming up the ladder,” he said. “I was hungry, I was like a roaring lion. I just wanted to devour every opponent in front of me with blazing speed and combination punching. I remember that same atmosphere, but it wasn’t coming out that way tonight.”

Everyone celebrated around him, but Malignaggi was a little sullen. He spoke like a once-elite fighter who could tell his skills had deteriorated: “It’s now two fights in a row where I’m seeing things and it’s just not flying out of me at times. I don’t know if it’s the lack of consistency. I don’t train the way I used to, with all the [broadcasting] work I get. Or if it’s my age or whatnot.” He was still reluctant, though, to hang up the gloves. “I still feel like I might be good enough to compete for the European title,” Malignaggi said. “I have to be honest with myself, though. I don’t know that I can compete for a world title anymore.”

He was flying to Las Vegas on Monday so he could announce a Tuesday-night boxing show for PBC. He would decide later whether to pursue the fight with Branco. It was Saturday night of Fashion Week, a good night for a party in Milan. Malignaggi, though, was most looking forward to some Italian food. He pointed to the bag next to him. “The first thing I’m going to do is eat this cannoli.”

Ben Crair (@bencrair) is a writer in Berlin. His work has been published in The New Republic, Slate, and The Awl.