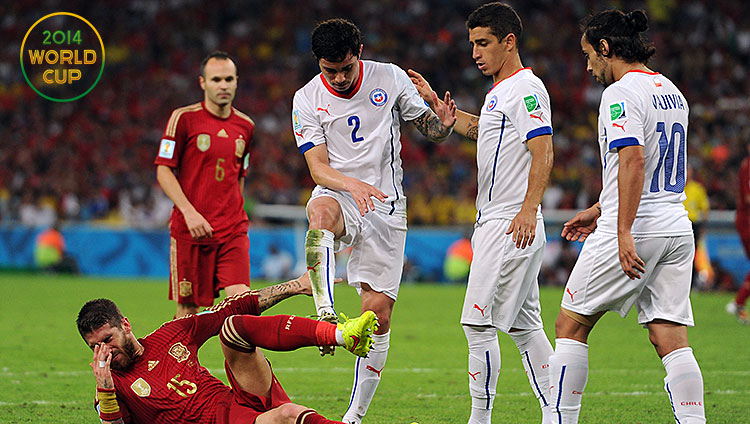 Soccer ideology on the international level is a rare thing. Managers are faced with a limited, static pool of talent and a training schedule that consists of, at most, a couple of weeks at a time most years.

The ultimate result is qualifying for and performing well in the World Cup. It’s a goal that prioritizes getting results right now, because if you don’t you’re out, and if you’re out you’ve failed. Losing games in the present makes it hard to focus on building for the long term.

Spain was a notable exception to that rule. There are many complicated reasons, but the results spoke for themselves. Its style of play is a large part of why the team became both immensely celebrated and ultimately unable to change before it aged. There’s something fitting about the fact that, as the Spanish passers go home, one of the teams advancing in their place is Chile, perhaps the only team in international soccer as fanatically committed to its system as Spain was to the vaunted tika-taka. Despite not having the legs, Spain remained devoted to its way of playing. And, in this tournament, that had a cost.

This particular World Cup has seen even more top contenders than usual opt for practicality. Netherlands manager Louis van Gaal summed it up after his team defeated Chile to top the group.

Van Gaal: "You just have to play according to your strengths… it's all about winning. I'll pick a system that helps me win."

Fit the system to the players. Brazil has done it, placing a team of talented but mostly functional players around Neymar and relying on him to provide the magic. Germany, for, like, the first time in recorded history, is playing with a false nine, adapting to the strengths of miniature playmakers Mesut Ozil and Mario Gotze, along with goal-scoring Jedi Thomas Muller. The last decade of Argentine soccer has been defined by trying to find the right system to make use of the country’s imbalanced, attack-minded talent.

But not Chile. Chile is, above all, committed to the system that Marcelo Bielsa instituted when he took over the team in 2007, a system to which current coach Jorge Sampaoli proudly proclaims himself a devotee. The system itself bears little resemblance to tika-taka. Rather, it is based on man-to-man marking and high heavy pressing without the ball. The mobility demanded from every member of the squad is why its center backs play as full-backs or midfielders with their club teams. When they do win the ball, they attack in waves and look to overwhelm the opponent and create chances quickly, before the opposing defense can settle. Then they press, take the ball back, and do it again.

Watch Chile play for 10 minutes and it’s clear that it plays the game differently than anybody else. Sometimes its back line gets described as four defenders, sometimes three. Frequently it looks like one, with Cardiff midfielder Gary Medel standing alone at the center circle, as his fellow “defenders” push so far wide they might as well be wing backs.

Obviously this makes Chile vulnerable to counterattacks. And since it doesn’t have any real center backs out there, it’s frequently susceptible to conceding set-piece goals, as opponents tower over its defensive line. The Dutch ruthlessly punished both weaknesses on Monday to win the group, first scoring a set-piece header and then on a blindingly fast, Arjen Robben–led counterattack.

Having lost to perhaps the tournament’s ultimate pragmatists means Chile will face Brazil in the round of 16. Chile has become a long shot. But even so, don’t expect anything different when it takes on the host nation. Even if the approach is suicidal (and against Brazil it may be), Chile is going to dance with the Bielsa that brought it.

On Monday, Spain’s reign as the ideal idealists ended. It’s fitting, then, that Chile was there in the same group to pick up the torch. On July 13, Spain will pass on the title of World Cup champion as well. It’s unlikely that Chile will receive the prize. It’s likely that whichever nation wins the thing — Brazil, Germany, France, or some other team — will have gotten there by employing a system with tactics built around the players. That should serve as another reminder as to exactly how great Spain’s run was. Its players fit a system, not the other way around.

In that same way, Chile’s idealistic approach to the game makes it special. It is a worthy recipient of the idealist mantle, but it isn’t Spain. Nobody is. Spain was the most idealistic side in the world and the best. We may not ever see that again.

What Do You Do When Your Rebuilder Is an MLB Contender?