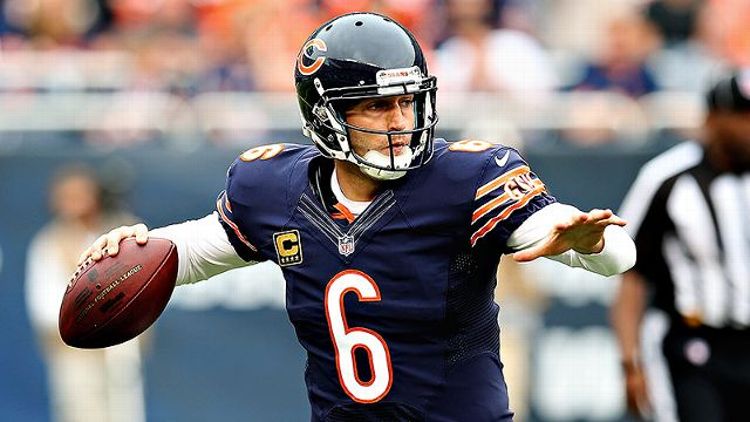 From the beginning of last offseason, Phil Emery’s intentions were clear. During the previous regime in Chicago, the Bears’ biggest issue had been finding a quarterback. When they finally did, the problem became protecting him.

In Jay Cutler’s four full seasons as starting quarterback, the Bears finished 13th, 32nd, 31st, and 24th in Football Outsiders’ Adjusted Sack Rate. Over that stretch, no quarterback was sacked on a higher percentage of his dropbacks than Cutler. I guess former GM Jerry Angelo deserves a least a little credit for his effort. Three times during Angelo’s 10-year tenure the Bears spent a first-round pick on an offensive lineman. Each was off the roster by the end of his fifth season.

Those misses left Emery with a group of late-round picks, castoffs, and failed experiments that were letting his franchise quarterback get hit more often than anyone cared to see. Rather than waiting out some of the younger players and making a few tweaks here and there, Emery elected to make wholesale changes. In a matter of two months, the Bears turned over 80 percent of their starting offensive line. Pro Bowl left tackle Jermon Bushrod was brought in from New Orleans with a $36 million deal, veteran Matt Slauson signed a one-year contract to play left guard, and the Bears spent their first-round pick on Kyle Long. Roberto Garza was retained as the center, which meant right tackle was the only spot in question heading into training camp. Eventually, rookie fifth-round pick Jordan Mills beat out J’Marcus Webb, and the new-look group was complete.

Even after getting beat up by Ndamukong Suh last weekend, the numbers so far are in Emery’s favor. The Bears are sixth in Adjusted Sack Rate through four games, and the new group up front has at least something to do with that. Bushrod owes Drew Brees and his quick release a thank-you note for his trip to the Pro Bowl, but even his average play is an upgrade over Webb on the left side. Both guards have played well, and although Mills has struggled a bit at times, he has at least been serviceable.

The most significant change in the Bears’ pass protection, though, has nothing to do with its offensive line. Emery’s biggest contribution to keeping his quarterback upright came about a month and a half before free agency even began.

When Marc Trestman was hired by the Bears, the hope was that not only would he get the most out of Jay Cutler — he’d keep him alive, too. So far, that has been the case. 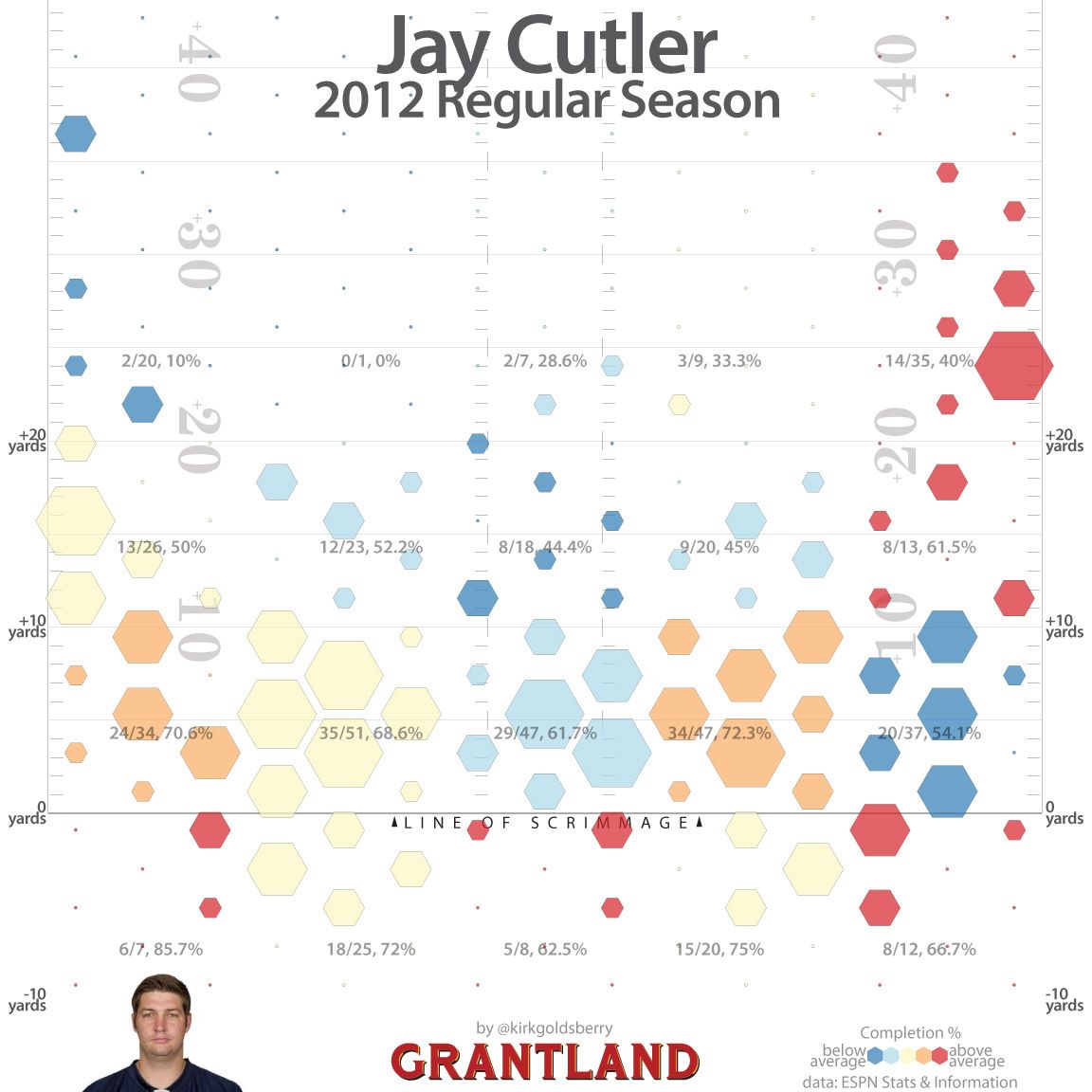 This is Cutler’s passing chart from last season, put together by the incomparable Kirk Goldsberry. In 2012, the average distance of a Jay Cutler throw was exactly 10 yards downfield, according to ESPN Stats & Info. Almost 60 percent of his throws were more than five yards past the line of scrimmage. 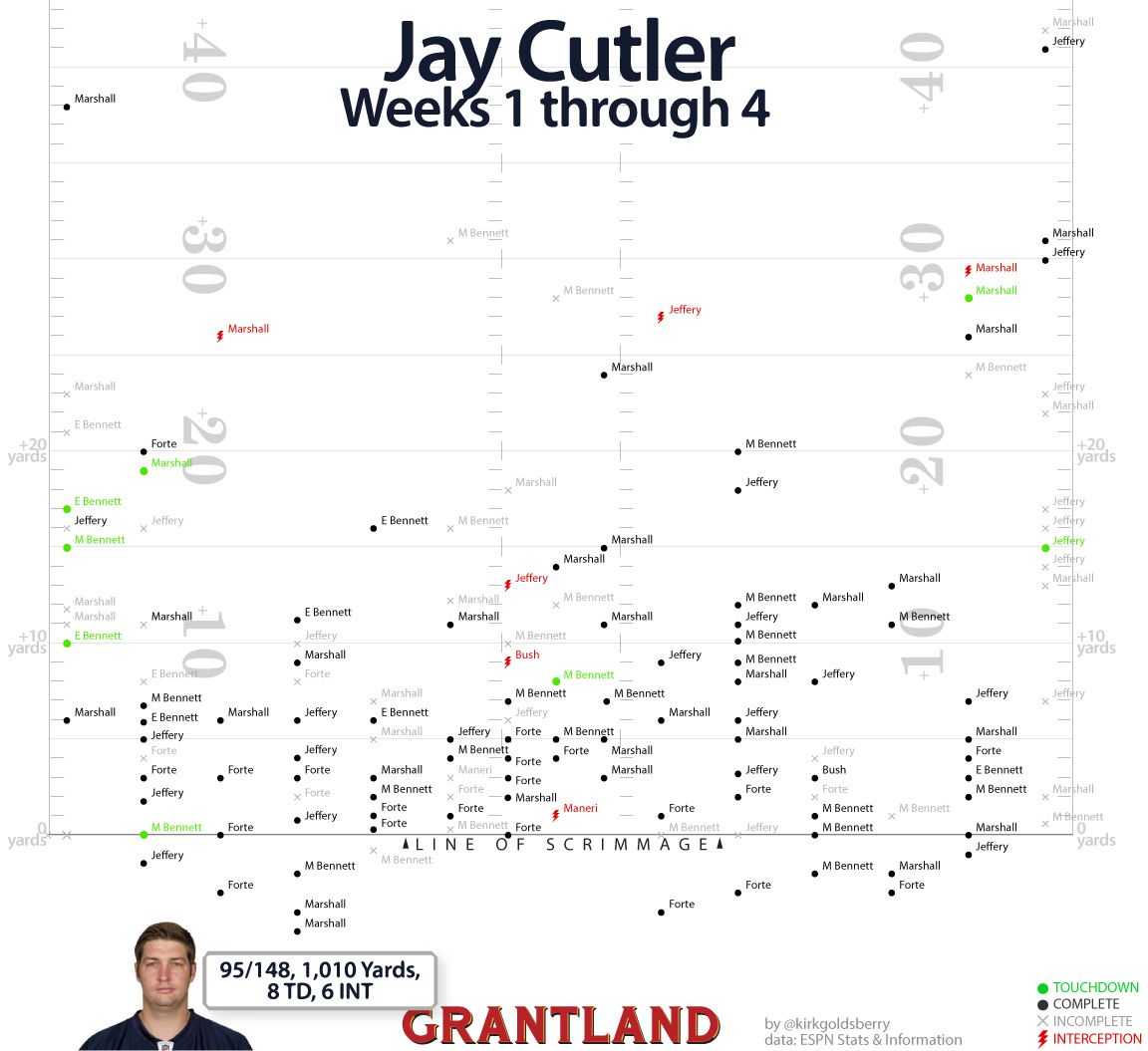 And here is Cutler’s chart through the first four games of this season. What skews the numbers somewhat is that the Bears were playing from behind for most of the game last week. His average pass against the Lions traveled 12.3 yards downfield. But in the three games before, that figure was 7.0, a full three yards less than his 2012 average.

The main difference hasn’t been in the amount of deep shots Cutler and the Bears are taking. With his arm, and with Brandon Marshall at his disposal, those are going to come (and they should; Cutler was completing almost 60 percent of his throws 10 or more yards down the field through three games). What has changed is where most of Cutler’s throws are now located. Last season, Cutler threw only 47 passes from 0 to 10 yards and between the hashmark and the numbers on the right side. Through four games this season, he has already thrown 19, and 14 of those have been complete.

Part of all this has also been who Cutler’s throwing to. Matt Forte has proven over his career to be one of the better pass-catching running backs in the entire league, and Trestman seems intent on utilizing that aspect of his game. Forte’s 23 catches are more than half of what he had all of last season. Last year, Bears tight ends combined for 29 catches in 16 games. Martellus Bennett has 20 in four games.

Signing Bennett was another move made this offseason with protecting Jay Cutler in mind. With the Giants, the 26-year-old was one of the better pass-blocking tight ends in the entire league. He has joined the revamped, improved offensive line in keeping Cutler clean, but the best offensive lineman on the Bears is still the guy on the sidelines wearing glasses and holding that massive play sheet.

Performances like the one against the Lions are always going to be part of life with Jay Cutler, but in this offense, there’s a good chance this will be his best season as a Bear. Not spending most of it on the ground goes a long way toward making that happen, and he has both his head coach and general manager to thank for that.

The Masked Man and Peter Rosenberg Podcast: Reviewing the State of the WWE