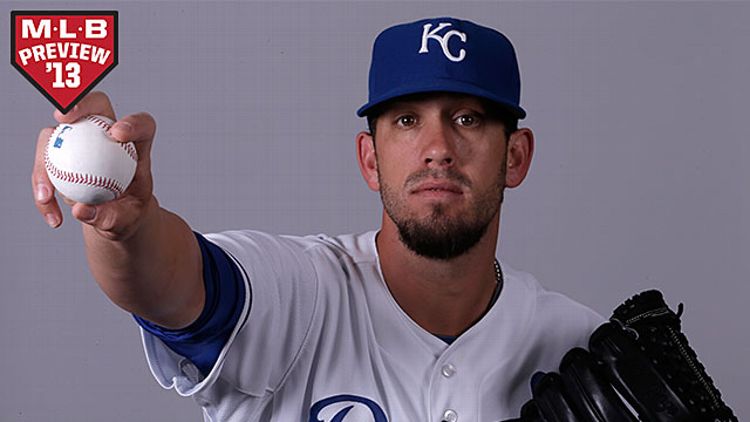 The homage was funny, although maybe a little out of place. Until you looked around the clubhouse. At one end, the imposing, 6-foot-5 Wade Davis strode through. At the opposite wall, utility man Elliot Johnson pulled on his jersey. A few lockers down, Dan Wheeler chatted with a group of fellow relievers. In the far corner stood James Shields, locked in conversation, the “KC” on his hat still looking a bit weird after six straight 200-inning seasons in Tampa Bay. This year’s Royals will have a heavy Rays flavor. Shields predicts the similarities won’t stop with a few familiar faces.

“I’ve been saying this for the last month and a half — this team really reminds me of that ’07 team, going into ’08,” said Kansas City’s new no. 1 starter, referencing the worst-to-first Rays of 2008. “We have all the talent in the world to succeed. It’s just a matter of putting it together. We have a lot of good, young talent, we’ve got a great bullpen, and our defense is phenomenal. And I believe this team has all the intangibles needed to win.”

There are many reasons for optimism. Shortstop Alcides Escobar posted the best offensive numbers of his young career last year. Third baseman Mike Moustakas blasted 20 homers and played stellar defense in his first full season. Salvador Perez hit .301/.328/.471 in his first sustained crack at the everyday catching job. Escobar is 26, Moustakas 24, Perez 22. Wait, there’s more. First baseman Eric Hosmer is 23. Johnny Giavotella, the waiting-in-the-wings second baseman newly dubbed “Wreck-It Ralph” by teammates Alex Gordon and Luke Hochevar for his oversize hands and arms (despite a 5-foot-8 frame), is 25. Center fielder Lorenzo Cain is 27. No team in baseball has more position players with breakout potential than do the Royals. If they did absolutely nothing over the winter, there’s a good chance the team would’ve improved a fair bit on last year’s 72 wins, just by having core players improve with another year of experience.

Of course, they did a lot more than nothing. The Royals acquired Ervin Santana from the Angels for a B prospect, then signed Jeremy Guthrie to a three-year contract, committing $17 million this year to two pitchers who combined to allow 69 homers with a 4.95 ERA over 360 innings in 2012. That was just the appetizer. Three days after the Winter Meetings, the Royals pulled off a blockbuster deal with Tampa Bay. James Shields, Wade Davis, and Elliot Johnson shipped off to Kansas City. In return, the Royals traded righty pitching prospect Jake Odorizzi, lefty pitching prospect Mike Montgomery, Single-A third baseman Patrick Leonard … and Wil Myers, the terrifying slugger who hit .314/.387/.600, cranked 37 homers, and won Baseball America’s Minor League Player of the Year award in 2012.

The analytical community’s reactions to the trade were swift, and harsh. “This is a terrible trade for the Royals,” wrote Grantland colleague Rany Jazayerli, “deeply flawed in both its theory and execution, and while it might make the Royals marginally more likely to make the playoffs in 2013, it does irreparable damage to their chances of building a perennial winner.”

The long-term implications of the trade weren’t the only problem. In acquiring Shields and Davis, Kansas City rounded out the rest of its rotation in one move, adding one of the American League’s best and most durable starters with Shields. But in trading Myers (and keeping prolific outmaker Jeff Francoeur), the Royals may have downgraded nearly as much in right field as they upgraded at starting pitcher … not in 2016 or 2017, but right now. From well-paid signings like Anibal Sanchez and Edwin Jackson to the still available Kyle Lohse to the dirt-cheap Brandon McCarthy to pursuing a trade for a different pitcher, the Royals had scads of other options to upgrade their rotation that wouldn’t have cost them the best hitting prospect in baseball. They considered those other options, and spurned them all.

“James Shields was attractive to every major league team,” Moore said. “His contract wasn’t a deterrent. We just felt that James Shields was the pitcher who could really make a difference with who we are and what we’re trying to become. Not to say that those other pitchers couldn’t have done that. But this is a guy who can come in, set the tone, and reset the course of our organization. Obviously he’s been a good pitcher. The only way we’re going to tilt the field in our favor is by who’s on the mound. We felt he was someone who would tilt the field in our favor every night he pitches.”

Any worries about giving another 600 plate appearances to a right fielder who hit .235/.287/.378 last year, rather than slotting in a player who’d have vied for Rookie of the Year honors if given the job on Opening Day?

“If you focus on what you’re giving up, it’s hard to get a deal done, because we all love our players more than everybody else does. Every team has holes. We felt improving our rotation, getting a pitcher like James Shields puts us on a different course, and allows our young players to become the players we’ve dreamed they will become. I don’t believe our young players will ever reach their ceiling unless they’re a part of a winning-type environment. And you’re going to have to do that with pitching and defense. History tells us that it’s very difficult for young players to become stars if they’re part of an environment that’s not winning games. It’s a different climate today than it was prior to doing the Shields deal. It’s a very different environment that it was three or four years ago.”

Moore worked in the Braves organization for 12 years, working his way up from an entry-level scout’s role to assistant GM in 2005. In that time, he said, homegrown players like Rafael Furcal developed into All-Stars, in large part because of the winning culture around them. It’s an interesting hypothesis, though one that’s essentially impossible to verify, since we can’t examine a parallel universe where Furcal played for the ’62 Mets. In the case of the Royals, even if Hosmer, Moustakas, Escobar, Cain, Giavotella, and the rest stage monster breakouts, we won’t know if they did that on their own … or if having Shields, Santana, Guthrie, and Davis around somehow made it happen. (Though we’d have our suspicions.)

Forget cause and effect, opportunity cost, long-term future effects of the big trade and everything else: How will the Royals fare this year? No one’s biting on the team’s spring training-best 13-1 record — “I think it makes no difference,” said Moustakas, a few hours before the Angels used a “courtesy runner” to sub for knee injury-recovering Albert Pujols every time he reached base, which by itself should eliminate any thought that spring results tell you anything of value. But from the players to the manager, everyone’s optimistic about the rebuilt rotation, a year after Royals starters posted a 26th-ranked 5.01 ERA and 27th-ranked 4.57 xFIP.

“Of course it feels different this year,” said Ned Yost. “Our starting pitching now gives us an opportunity to compete every day. Every single day, we’re going to have a guy we can pencil in that we think can go deep into a game, keep the game close, and give us an opportunity to use our good defense and our pretty darn good young offense to win the game.”

Moore talked about the strides the organization made in building a strong farm system, making well-timed trades and especially giving international spending a big boost from once-rock bottom levels. Even after the Myers trade, he believes the Royals still have a crop of strong prospects on the way, and that the same scouting and player development staff that developed Myers (and Hosmer, Moustakas, and the rest) can produce a new batch of talented farmhands in the future. But he’s not making any predictions right now. Not on Davis translating his huge success as a relief pitcher last year into his return to a starting role in 2013. Not on the Royals’ $12 million investment yielding an Ervin Santana who’ll be better than the home run-yielding arsonist he was last season. Not on how Myers will fare with his new team — “Wil will be good,” was all Moore offered. And certainly not on Kansas City’s chances to end a 28-year drought that’s the longest for any team in the big four North American professional team sports.

“I really don’t know if we’re [playoff contenders],” said the Royals GM. “It’s our job to focus on trying to get better. Just get better, and then some day we might wake up and be good. I know our team is better. We’ve got an idea, a dream of what our young players can become. When do they get there? I don’t know. I don’t know how quickly that can happen.”

He may not know, but Moore, like the rest of the Royals organization, probably has a goal in mind: sometime between now and the winter of 2014, when James Shields could hit the open market and Wil Myers could be a season and a half into a superstar’s career.