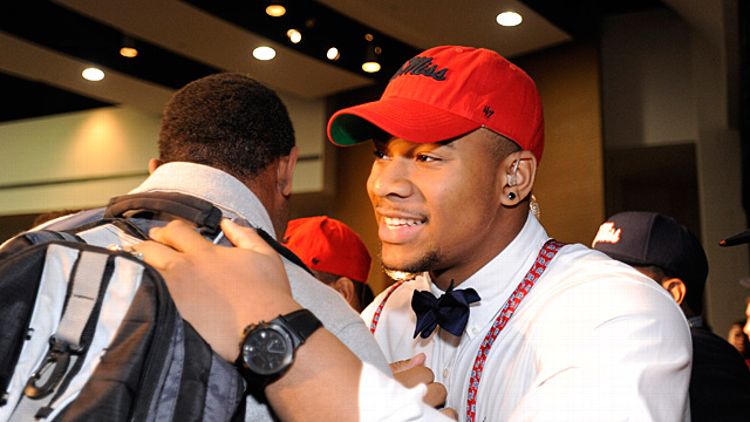 1. I should declare up front that I am firmly entrenched in the strata of college football fanatics who find National Signing Day to be a weird and discomfiting phenomenon, and that I do not frequent any message boards, and that I believe that the hat dance has really run its course. I am of the firm belief that recruiting, while of obvious importance, probably means slightly less than we think it does, especially at this moment, with the sport on the dawn of a new age of offensive schemes, at a time when actual coaching seems to matter more than it ever has.

2. That said, the fact that the University of Mississippi — a program that has not won the Southeastern Conference in 50 years, a program that may be most well-known, in recent years, for its ties to a Michael Lewis book and a Wright Thompson documentary — cleaned up on signing day, securing the nation’s no. 1 recruit and several other top-flight players, will arouse an almost reflexive suspicion in many people, including me. I cannot help this; I have absolutely no evidence that Ole Miss has done anything wrong here, and the fact that top recruit Robert Nkemdiche’s brother already plays for the Rebels makes this seem as if this could have happened organically, without any sort of undue influence. Yet I refer you to the column written by the editor-in-chief of this website last week and ask you to substitute “recruiting” for “PEDs,” and ask you if it essentially makes the same point. Schools have been gaming the system for more than 100 years, starting with the Ivy League. Don’t take it personally, Rebels fans; until we recognize that the notion of amateurism itself is flawed, nothing is above suspicion.

3. So it is extremely plausible, as Ole Miss coach Hugh Freeze explained, that this recruiting class is a product of “solid tie-ins,” that it was, as he told CBSSports.com, “a perfect storm for us.” The top recruit happens to have ties to your school, and this link to the top recruit draws in other top recruits, and these recruits now communicate through social media and text messaging and form a network before they’ve even collectively chosen a school to attend. A similar thing happened, on a lesser scale, at Penn State, where coach Bill O’Brien managed to hold the core of his 2013 class together by bonding them to each other — and to the university — before the sanctions against the Nittany Lions came down. Which makes me wonder if, in all our hand-wringing about what National Signing Day has become in the Internet age, we’re missing the more subtle point: Superstar athletes, like all teenagers, just want to feel less alone before they venture out into the real world. It’s possible that all Hugh Freeze took advantage of was modernity.