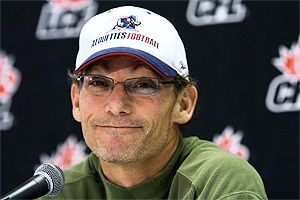 I’ll admit that I, too, went right to the South Park jokes, but alas, it looks like Marc Trestman is now my buddy, guy. The Chicago Bears hired their 14th head coach in team history early this morning, and they didn’t just get him from a different country. They got him from a city that doesn’t speak English. OK, that’s all of them. I promise.

Since Jimmy Johnson’s tweet a few days ago, it seemed like the Trestman hire was drifting toward inevitability. The Montreal Alouettes head coach was one of three finalists announced yesterday, and after another full day at Halas Hall, the Bears have their guy. When Lovie Smith was fired after a 10-6 season, part of the reasoning was supposedly that new Bears GM Phil Emery wanted a coach who fit his image for the franchise. Well, now he has a coach who actually fits his image.

As it became clear that Trestman had moved to the front of the line, various Chicago outlets began reaching out to former pupils to ask about his fit with the Bears. Trestman was the offensive coordinator for Steve Young’s 49ers in the mid-’90s, and after explaining the finer points of caring for bonsai trees, Young said that Trestman would be a great fit for Chicago and Jay Cutler. Rich Gannon, who was the league MVP in 2002 with Trestman as his offensive coordinator, said that if anyone could cure whatever it is that ails Jay Cutler, it’s Trestman. Another quarterback on that list is actually Jay Cutler, who worked with Trestman as he prepped for the NFL draft. Cutler said he enjoyed their time together, which is equivalent to giving Trestman a kidney.

There’s a reason that every question about Trestman’s fit in Chicago eventually moved to Cutler. Lovie Smith lost his job because he never found a coordinator who could maximize the potential of his quarterback or his offense. This time around, that isn’t going to be the missing piece. It’s going to be the first one.

With the facts parsed out, the question becomes whether us Bears fans should be pleased with how this all went down. My answer falls somewhere between “yes” and “I have no goddamn clue.” The argument that if Trestman were any good, he’d have found a better job sooner is ridiculous. Mistakes are made every year in which coaches are given opportunities and which ones aren’t, and by all accounts, this guy is some sort of offensive mastermind. He’s also an offensive mastermind with experience as a head coach, and that should count for something. Trestman has been responsible for an entire roster, for creating practice plans, and for considering each detail of how a team is run. It doesn’t matter who you are — doing that for the first time comes with its challenges.

The other side of this, apart from whether it’s the right decision, is considering the appeal of something new. When Brandon Marshall came to town this offseason, there were plenty of people ready to say that us Bears fans shouldn’t be quite so excited. What those people didn’t understand is the utter lack of excitement from everything that had come before. Trestman’s hiring is similar. In the past 10 years, the Bears’ offense has been run by Terry Shea, John Shoop, Ron Turner, a past-it Mike Martz, and Mike Tice. It hasn’t exactly been appointment television. The Bears’ new coach is someone who was once called “a twist between Bill Walsh and Einstein.” Even if this is a flaming disaster, it’s a different sort.

With news that the Bears are interested in retaining Rod Marinelli as their defensive coordinator, the hope appears to be this: that Trestman can enliven the offense while continuity extends the defense’s window for one or two more seasons. There are personnel decisions to be made on that side of the ball (Julius Peppers’s massive contract, Brian Urlacher’s free agency), but with Marinelli returning, it seems like the Bears would be more inclined to take one more run with what brung ’em.

Whether that offensive improvement materializes is again dependent on where we started — and that’s with Jay Cutler. It will be on Emery to get his quarterback the remaining pieces he needs on offense (help on the line and a middle-of-the-field receiving threat), but Trestman’s legacy in Chicago will hinge on Cutler’s. It will be on the new coach to not only tailor his offense to the strengths of his quarterback, but to tap into the potential that no one else has been able to mine. Is Trestman the one who can make that happen? For Bears fans, right now, he has to be. Now, if you’ll excuse me, I’ll be spending the next 10 hours watching three-down football.

An Artist's Rendering of What J.J. Watt Could Look Like Next Season