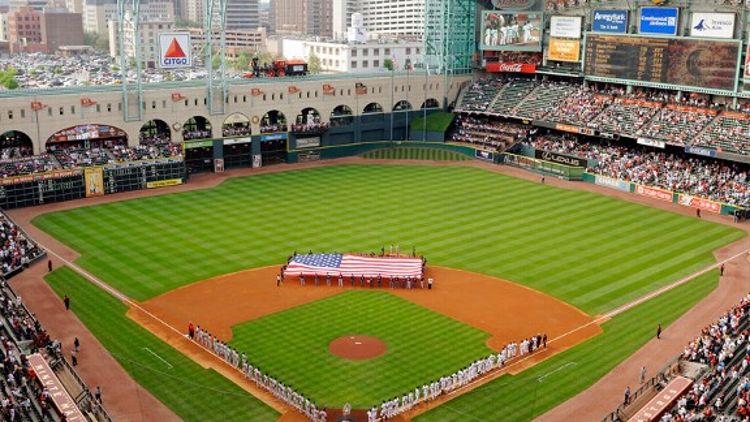 Baseball owners unanimously approved the sale of the Houston Astros from Drayton McLane to Jim Crane on Thursday, which will lead to the team moving from the NL Central to the AL West for the 2013 season.

The decision will give each league 15 teams, baseball’s first realignment since the Milwaukee Brewers switched from the AL to the NL after the 1997 season.

As part of the Astros’ agreement to switch leagues, the sale price was cut from $680 million to $615 million, a person at Thursday’s meeting told The Associated Press. The person spoke on condition of anonymity because details weren’t announced. – Associated Press, Thursday, November 17, 2011

So we’re just sitting here minding our own business in Astros Fan Park, where we’ve been hanging out contentedly (if not ecstatically) since 1962, and suddenly this armored brigade shows up, turns on a lot of bright lights, and starts screaming at us to get our crap off the plaza.

New owner Jim Crane is getting a proposed $65 million kickback to move the Houston Astros to the American League. For that and that alone, he should have been prohibited from buying the team, since he seems to lack respect for tradition or legacy, possess no understanding that the designated hitter makes baseball less interesting, and it’s possible he just wants to own a major league baseball team because it’ll look good hanging over the fireplace in his trophy room. After all, anyone willing to pony up $680 million for baseball’s worst franchise can’t know all that much about the game to begin with.

Still, here they come, dumping us out of our metaphorical tents at one o’clock in the morning after the worst season in Astros history, perhaps assuming that 100+ losses means a fan base so demoralized that we won’t notice or care. Well, we’re noticing. And just like all those folks out there Occupying Wall Street in mass protest against the social and economic injustices being committed in a world where corporations are permitted greater civil rights than actual human beings, we are not pleased. In this time of mass unemployment, foreclosure, bankruptcy, and despair, the future of the Houston Astros is now in the hands of someone with too much money to give a crap about the people he’s supposed to serve: the fans. Somebody has to take a stand before it’s too late.

Let’s debunk the arguments in favor of this AL move. Frankly, there are only two:

1. We want the leagues to be even, so someone has to switch. There are 14 teams in the American League, 16 in the National, a 15-15 split would probably make a lot of sense, and our sympathies go out to all those bothered yea these many years by the inability to make a tidy spreadsheet when laying out division standings. Funny story, though: In 1998, when the Tampa Bay Rays and Arizona Diamondbacks expanded into existence, it was determined that the resulting 15-15 league split was impractical for season play due to the amount of resulting interleague match-ups necessary to keep all the teams on the field every day. How to ameliorate this? In 1998, MLB Commissioner Bud Selig made a show of inviting one team to flop from AL to NL, eventually awarding the potentially-lucrative opportunity to the Milwaukee Brewers, a team then coincidentally owned by none other than lifelong Milwaukee resident Bud Selig. Thus, the National League Central has six teams, one to spare as the discussion of evening out the leagues arises again.

So why, you may be asking yourself, would the Milwaukee Brewers not just go on back from whence they came? Ha ha ha, you fool. I believe it’s called “cronyism,” the same reason why former Goldman Sachs CEO Henry Paulson may have exhibited no obvious moral or ethical qualms bailing out his old firm while serving as Secretary of the Treasury during the Bush Administration, despite their obvious complicity in the worldwide financial meltdown. No, Selig’s not going to roil the intestines of his beloved Brewers, especially not now, not while they’re contenders, even though they’ve only been in the National League for 13 years and Prince Fielder practically came out of the womb with designated and hitter stenciled on his forearms. Let somebody else do it. Maybe one of those teams that no one really pays much attention to. Like the Astros. Hey, aren’t they for sale?

2. An Astros-Rangers rivalry would be good for the sport. Agreed. Which is why it’s so convenient that we already have one. It’s called the Silver Boot Series, it is self-policed, and involves an actual trophy.

But okay, let’s say that arrangement (on top of the general Houston-Dallas rivalry that keeps everyone in the region just as entertained as they’ll ever need to be, judging from the number of hostile messages I’ve received from Rangers fans this week) isn’t enough and we need to make it official, while the Rangers are as good as they’ve ever been, and the Astros couldn’t hit the broad side of Rick Perry. Gosh, what a lovely “rivalry” they’re forcing Houston fans to participate in, at least until things turn around. In other words: It’s nice that you graduated from college and got a good job where you worked hard for five decades but the company’s had a few bad years so we’re gonna have to let you go but don’t worry because it looks like Wal-Mart is hiring extra help for the holidays and won’t that be fun, wearing a little blue vest and sacking economy-size packages of paper towels while your neighbors won’t make eye contact because it’s all just so embarrassing? Seriously, we hear they’ve got a benefits package that’s just as good as the one you had in your last job, assuming they’ll give you enough hours. At least you can still pay the mortgage. Unless they raise the rates.

It’s going to take the Astros’ economy several seasons to recover from our current recession, if we ever do (this being the Astros we’re talking about), and the idea of spending that time getting kicked in the ass by a Silver Boot suddenly worth more than pride – not to mention having to spend much of the season playing outside our time zone and in dreadfully boring places like Anaheim – is really more than anyone could bear. Except Carlos Lee, who’s been ready to strap on that golden DH parachute for years.

I have toiled at loving the Houston Astros my entire life, even though the payoff has never once equaled the work I’ve put in. I’ve stayed in my pup tent and weathered all of their storms: crushing playoff defeats, Astrodome scoreboard destruction, letting Nolan Ryan go (oh, the painful irony of that one), “Enron Field,” Roger Clemens in general, being swept in the World Series and accused of racism along the way, watching our farm system dwindle like the American manufacturing sector after too many years of outsourcing to China…the list goes on and on. But that’s sports fandom, isn’t it? You dance with the one that brought ya. I am a die-hard, lifelong, dyed-in-the-rainbow-wool fan of the Houston Astros. And the Houston Astros play National League ball.

So now I’m unwilling to stand by as they tell me that my beloved ‘Stros are moving to the American League with the same blasé tone of this-is-happening-and-there’s-nothing-you-can-do-about-it-ness usually reserved for announcements like “They’re extending the Bush tax cuts,” or “We’re invading Iraq,” or “Matt Leinart is now quarterbacking the Texans.” I feel powerless, but I know that in this battle, at least, I have a voice. I can vote with my ticket dollars. I can encourage others to join me. I will probably not start a drum circle, but one never knows.

For 50 years, the Houston Astros have been the flagship sports franchise of the proud, innovative, and diverse city in which I was born. They are often overlooked by anyone outside the Bayou City, and the fact is, I think we’d all come to terms with that. But there comes a time in any movement when you must call for reinforcements, link arms, and stand in solidarity against the riot cops of asinine corporate decision-making. The time for action is now, not just for Astros fans, but for baseball lovers everywhere. Sure, you might still be gainfully employed with your team, but so long as 50 years of history can be traded like a $65 million pack of bubblegum cards between very, very rich little boys, no one is safe. Bud Selig and Jim Crane are the 1 percent. We are the 99 percent. Occupy Minute Maid Park. Or, come to think of it: don’t.

Whitney Pastorek (@whittlz) is a former senior writer for Entertainment Weekly, now seeking her fortunes on the open road. Her essays and journalism have appeared in the New York Times, Sports Illustrated, ESPN the Magazine, and the Village Voice, among others.