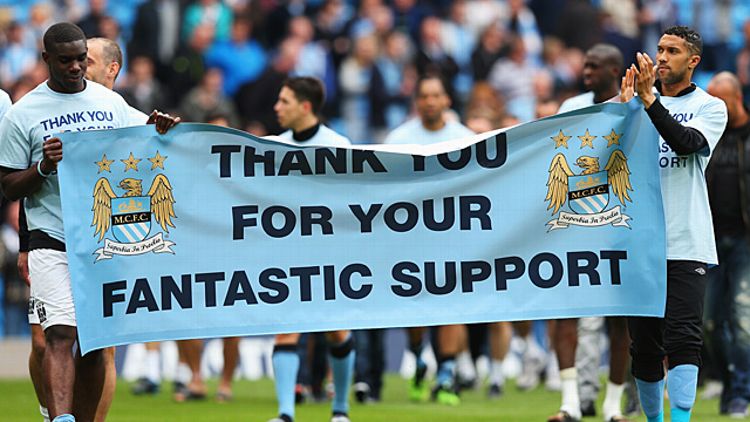 I used to live on Horton Road in Manchester. The back alley of the terraced house backed onto Maine Road, Manchester City’s former home in Moss Side. On game days I used to enjoy the time delay of hearing a muffled roar through the window, followed a few seconds later by the audio on the radio: “And there’s been a goal at Manchester City!” I recently wrote about the intimate distance of Sir Alex Ferguson’s choreography following me from Manchester pub TV screens to Brooklyn laptops, but the affective experience of that surge of sound is just as much a part of my emotional memory of Manchester football.

With Ferguson retiring, David Beckham and Paul Scholes following suit, and Roberto Mancini being fired, Manchester’s been on my mind recently. But now it’s “over here,” as Manchester City and the New York Yankees have teamed up to form New York City FC. Manchester’s in America.

Manchester and America are a fascinating mix, partly because America is one of the few land masses big enough to cause slight unease in the average Mancunian’s assessment of his city as the center of the universe. When I think of previous encounters between Manchester and the U.S., such as Tony Wilson telling a bemused group of New York music journalists to “wake up, America — you’re dead!” as he introduced the Happy Mondays. Somewhere in the mix there’s always a faint air of hurt bewilderment on the Manchester side at any air of indifference on America’s part.

Maybe that’s why when I heard the news of NYC FC, an infamous 2008 encounter between Noel Gallagher and Jay-Z popped into my head. Seen from a distance, it’s a moment that’s assumed the significance of a parable for me.

At the time, beyond being the principal songwriter for Oasis and a celebrity Manchester City fan, Gallagher had made something of a name for himself as an outspoken spokesperson on sundry matters. This reputation wasn’t hurt by the fact that, in contrast to his brother Liam, he was a veritable nuanced philosopher. Liam put most of his efforts into aggressive posturing, with a zeal that was almost charming. Just take his reaction to City winning the title last year.

Around the stadium, grown men and women were weeping in delirium, families were hugging, children were being regarded with misty-eyed joy that they should see this day, as City players piled on top of each other on the sideline.

Liam, meanwhile, thinks to himself, What would Liam Gallagher do when overwhelmed by emotion, and he settles on acting like he caused it.

Anyhow, in 2008 Jay-Z was announced as headliner for Glastonbury Festival, much to the chagrin of Noel Gallagher. Gallagher, speaking from a cultural vantage point we might charitably call “peak rock,” had gamely offered up the following response: “I’m sorry, but Jay-Z? No chance. Glastonbury has the tradition of guitar music … I’m not having hip-hop at Glastonbury. It’s wrong.”

I like to picture the business meeting at which Jay-Z was informed of these comments:

“What is it? I’m in a meeting … Who? … Glastonbury? That’s the place with the stones, right?… Oh. Stonehenge. Huh. Did not care to know that … Who? … The Beatles guy? … He said what? … Like in 1973 he said that? Tell you what, send him a memo: The future happened without his permission. Actually send him a stone. Carve it.”

In fact there was something quite generous about what Jay-Z actually did. He incorporated Gallagher’s comments into his intro video, then ambled coolly onto the stage strumming a muted guitar and leading a crowd sing-along of “Wonderwall,” which, while still having the net effect of squashing Gallagher like a bug, at least took the courtesy to identify him first. Jay-Z was a guest after all.

Jay-Z, of course, went on to have his own involvement with the wide world of sport, while Noel Gallagher went on to interview Mario Balotelli, who didn’t know who he was.

Maybe I’m thinking of that incident because the power dynamic described in it may have some relevance to the arrival of Manchester City into MLS. Soccer is one area where Mancunian braggadocio is truly based on merit. There’s a version of this story where City arrive into town and thread the needle of disarming both American sports purists and so-called Eurosnobs with enough grace to acknowledge that they’re new in the town they’d like to rule. As such, having the Yankees introduce you is a little like having Floyd Mayweather carry your belt to the ring. The imprimatur confers a kind of instant credibility (though you still have to fight when the bell goes).

There are other less benign possible outcomes, of course. The most obvious instructive example is the failure of Chivas USA to take root with even their assumed first constituency of L.A.-based Club Deportivo Guadalajara fans — those fans who embraced the new team as a concept were at the very least matched by those who rejected it. It’s not hard to map this scenario onto American and indeed expat fans of other Premier League teams if the accent falls too heavily on the “City” instead of the “New York.”

My gut instinct, though, is that if either of the two Manchester clubs (and yes, for the purposes of word count I’m claiming there are two Manchester clubs) can make a go of this, ironically City might be the better placed. The Yankees and United had a marketing partnership for a while, and as the respective behemoths of their sports might have seemed the more obvious partnership on a team, but I suspect United might have been more likely to endure a Chivas-style backlash, as the temptation to trust too heavily in their own brand would have been irresistible. As it is, they’re still well poised to take advantage of the increased exposure from the new NBC deal and can continue to spread their brand from “over there” while continuing their complex territorial sponsorship arrangements.

Meanwhile, City are “over here.” For all the recent, unimaginable wealth and big splashes in the transfer market, there’s still a kernel of their history as the “friendly club” in the mix. And their impressive and sustained investment in youth (including the infrastructural investments they’ve already made in youth soccer camps around the U.S.) may ultimately be the sort of initiative to offset their nouveau riche footprint. They’ve landed in New York in an election season, and have been parachuted straight into a political dogfight for their new stadium (might want to tag in the Yankees for that round), but from conversations in and around the organization, they’ve shown some understanding of the specific soccer landscape they’ve landed in, and most crucially, a willingness to listen. That’s their best hope for success. As Jay-Z once gently suggested to Noel, Manc swagger won’t cut it.

About Last Night: Don't Count Out the Champs