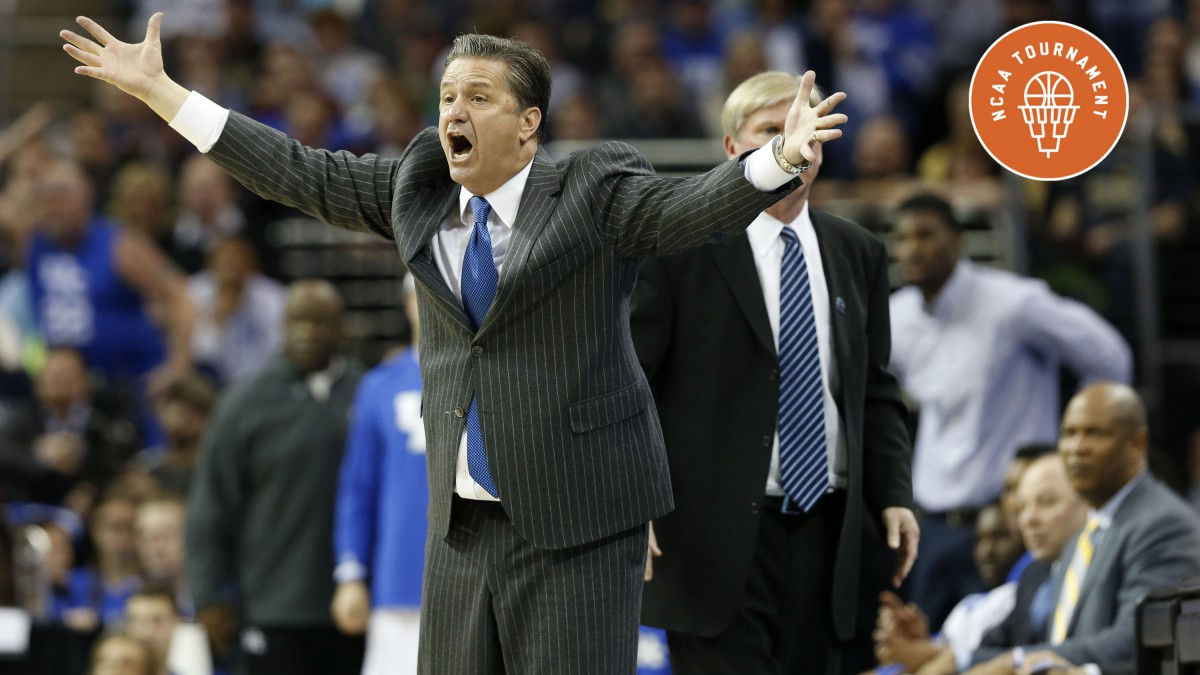 So I disguised myself and came back and studied you. You were easy game. You had an old and lofty reputation for honesty, and naturally you were proud of it — it was your treasure of treasures, the very apple of your eye. As soon as I found out that you carefully and vigilantly kept yourselves and your children out of temptation, I knew how to proceed. Why, you simple creatures, the weakest of all weak things is a virtue which has not been tested in the fire.

History is a slippery, protean beast. It’s hard to hold on to, and it will show you many faces at the same time. Say, for example, you’re a team that’s trying to become the first men’s Division I college basketball team in nearly 40 years to go through an entire season undefeated, all the way to a national championship. You’ve already got history by its greasy tail. Every game you win, your grip gets both a little stronger and a little more unsure, because, by now, the team that beats you will grab ahold of history, too. That is what happened on Saturday, when Notre Dame caught Kentucky on a night that might have been The Night. But it wasn’t, and now Kentucky moves along to a Final Four with history in its grasp, but knowing now how easily it can slip away.

All the Grantland coverage of the 2015 NCAA tournament, right here.
There is more than a little history to spare in the other three teams even before you talk about Kentucky. Mike Krzyzewski now has been to as many Final Fours as John Wooden. (Let us pause for a moment to recall that Wooden’s UCLA teams won nearly every damn time they were there.) Tom Izzo won the Battle Of The March Pains In The Ass over Rick Pitino and Louisville, which brings Izzo to his seventh Final Four. Wisconsin’s Bo Ryan is a finalist for this year’s induction class into the Basketball Hall of Fame. So is the coach of the team he’s playing. And thereby hangs the real tale of what has happened already in this tournament, and what’s to come.

It has been John Calipari’s March Madness, for good or ill. In the years since he coached UMass to a Final Four appearance that no longer counts in the record books — and since he coached Memphis to a Final Four appearance that no longer counts, either — a lot has changed in college athletics. The NCAA model, under which Calipari’s first two Final Fours had been rendered nonevents, has come under siege from so many angles, and in so many places, that it now functions as little more than an object of ridicule. As that occurred, Calipari has been rehabilitated as the first coach to succeed under what may be the new paradigm of college athletics — a pure business model, an honest transaction between the athletes and the institutions that their efforts enrich. The one-and-done philosophy that has been the source of Calipari’s success at Kentucky now looks less like a completely cynical exercise in brand-building and more like a realistic appraisal of how to operate within an enterprise that is being reformed from the outside in. The fact that it nonetheless remains a completely cynical exercise is beside the point — and the only thing that keeps the universe from dissolving in a pool of cognitive dissonance is that Calipari insists on draping the new paradigm with his own gussied-up version of the tattered nobility of the previous one.

“Look, I keep saying this: Twenty-five years ago an NBA contract was worth $125,000,” he said before Saturday night’s game. “If you’re in the top 10 picks [now], you’re going to make $25 million on your first deal. Your second deal could be worth another $80, and it is going up. That it’s $80 million, $120 million for these families and their children and their dreams and aspirations. I have to respect that, and I do. But I also know we had 10 guys, four stayed that we didn’t expect. So who were the three that I was going to leave out? Whose child was I going to say, ‘You’re not playing and I’ll bury you to make it about you’?”

Yes, it becomes rather cluttered around the old roster when some of the players who you might have thought would be one-and-done come back to be two-and-dones, or even three-and-dones. What is a paradigm-smashing master of the new order of college sports supposed to do in this situation? It is an interesting problem to have, especially when you only have your players’ interests at heart. What a guy. 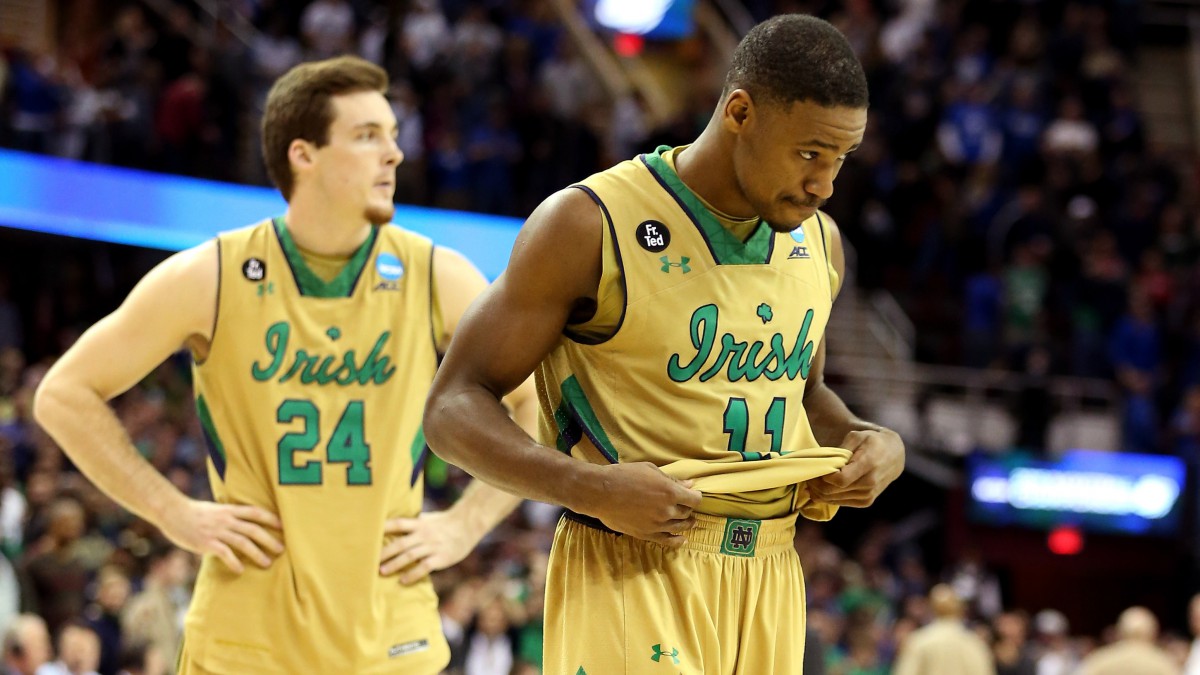 On the one hand, you can say that what happened Saturday night proves that Kentucky is vulnerable, especially when everything in the game was ass-backward right from the jump. On the other hand, you can say that this was the night Kentucky was going to lose, and it didn’t. On yet another hand, and assuming you are a Hindu deity, you can say that this was what the tournament needed to put a charge into it. On yet another hand, you can say that what this tournament did not need was a chance for John Calipari to lay on the suds and rainbows about everybody’s mom and what a scrappy young underdog’s game his mercenary army was forced into playing by Notre Dame. And on the final hand we choose to consult, you can conclude that, whatever happens in Indianapolis this week, come hell, high water, or massive civil disobedience, the Midwest final is the game that they will talk about for decades when they talk about the 2015 season.

It was all so backward. The numbers jump around the stat sheet like subprime mortgage stocks when the bubble bursts. Pat Connaughton had nine rebounds, or as many as the Dash Brothers — Willie Cauley-Stein and Karl-Anthony Towns — had combined. Kentucky shot an inhuman 75 percent from the field in the second half; Towns himself was 8-for-8. Against the long, active Kentucky defense, Notre Dame went nearly 29 minutes without turning the ball over once, including all but the last 26 seconds of the second half. Zach Auguste, who is going to be heard from next season, scored 20 points in 27 minutes, all of them around, over, and through the massive Kentucky front line. Kentucky went the last 12 minutes without missing a shot from the field, hitting nine in a row. These included a chilly 3-pointer by Aaron Harrison with 3:18 to play that finally got Kentucky into the lead, 64-63, and set Ashley Judd to dancing in the money seats. Until, that is, Notre Dame’s Jerian Grant came right down and nailed a triple of his own to take the lead back at 66-64. They were Notre Dame’s last points.

“We came up dry on the last couple of possessions,” Notre Dame coach Mike Brey said after the game. “And then we couldn’t make a stop at the other end, and we’ve been doing that all year. We have an empty possession and then we make a stop. Tonight, at the end, we didn’t do that.”

There are several important conclusions that we can draw from the game. Most important among them: Kentucky is very big. Kentucky is very talented. Kentucky also is very young. That inexperience showed vividly in the regional final. They haven’t cracked yet, but if the opposition doesn’t crack, either, Kentucky will rattle a little.

One play serves as an illustration. With 1:59 left and trailing by two, Towns had Auguste on his hip in the low post for approximately the 900th time in the second half. Andrew Harrison tossed him the ball, and Towns mysteriously hot-potato’ed it right back to him in the left corner. Baffled, Harrison drove the baseline to oblivion, stepping out of bounds under the basket for what might have been a killer turnover. Calipari was beside himself.

“We’re really young, and we showed it tonight a ton,” Calipari said. “We had some turnovers that were like, ‘What did you just do?’ We did some things that we work on every day [not to do] in practice.”

But they didn’t make any mistakes in the final minute. After failing to ring up three consecutive stops the whole game, they locked up Notre Dame the last three times the Irish had the ball — and, without pausing for a timeout, with six seconds to play, they coolly ran a set that got Andrew Harrison the two free throws that won the game.

“I mean, I would rather play well and win by a lot than play a close game like that,” Harrison said after icing it. “And it showed us that we never give up, and we fight to the end just like any other team.” 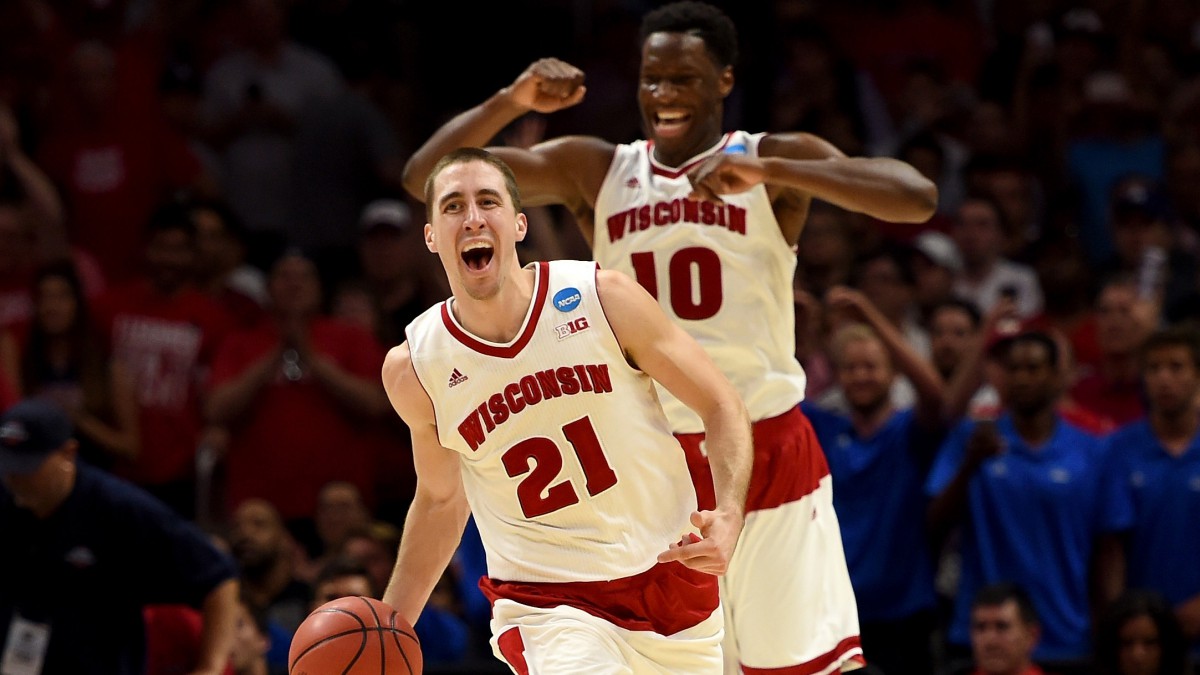 As it happens, Wisconsin, which Kentucky plays in the national semifinal on Saturday night, is rather like Notre Dame, except bigger and a bit more talented. They are efficient and they are tough. They hit free throws down the stretch. They took two whopping punches from Michigan State in the Big Ten tournament final and came back to win. They defeated Arizona with relative ease on Saturday afternoon. They do not crack, and they can make youngsters rattle. Maybe. Perhaps.

“That’s a great matchup,” Brey said. “They’re skilled and they can spread people out a little bit. They have a little more bulk and front-line size, but they’re really skilled offensive guys and, certainly, we were able to get some things done [inside] tonight.”

And yet there was a palpable sense on Saturday night, as John Calipari got up onstage and thanked all the moms, that a shining sliver of history had slipped out of Notre Dame’s grasp. Certainly, that sense was present in the stands and in the Irish locker room. Whether it dawned on the Kentucky players is a question for another day — specifically, next Saturday, and then the Monday after that. History, that slippery, protean beast, is there to be grabbed, and all Kentucky has to do is to be perfect.

“We’re not perfect. We’re undefeated, but we’re not perfect,” said Calipari. “We showed that tonight.” Down the hall, his season over, Pat Connaughton caught himself in mid-cliché. “You know, this is tournament play,” he said. “This is sports. Nobody ends up undefeated.

“Well, I guess I can’t say that tonight … because those guys are.”