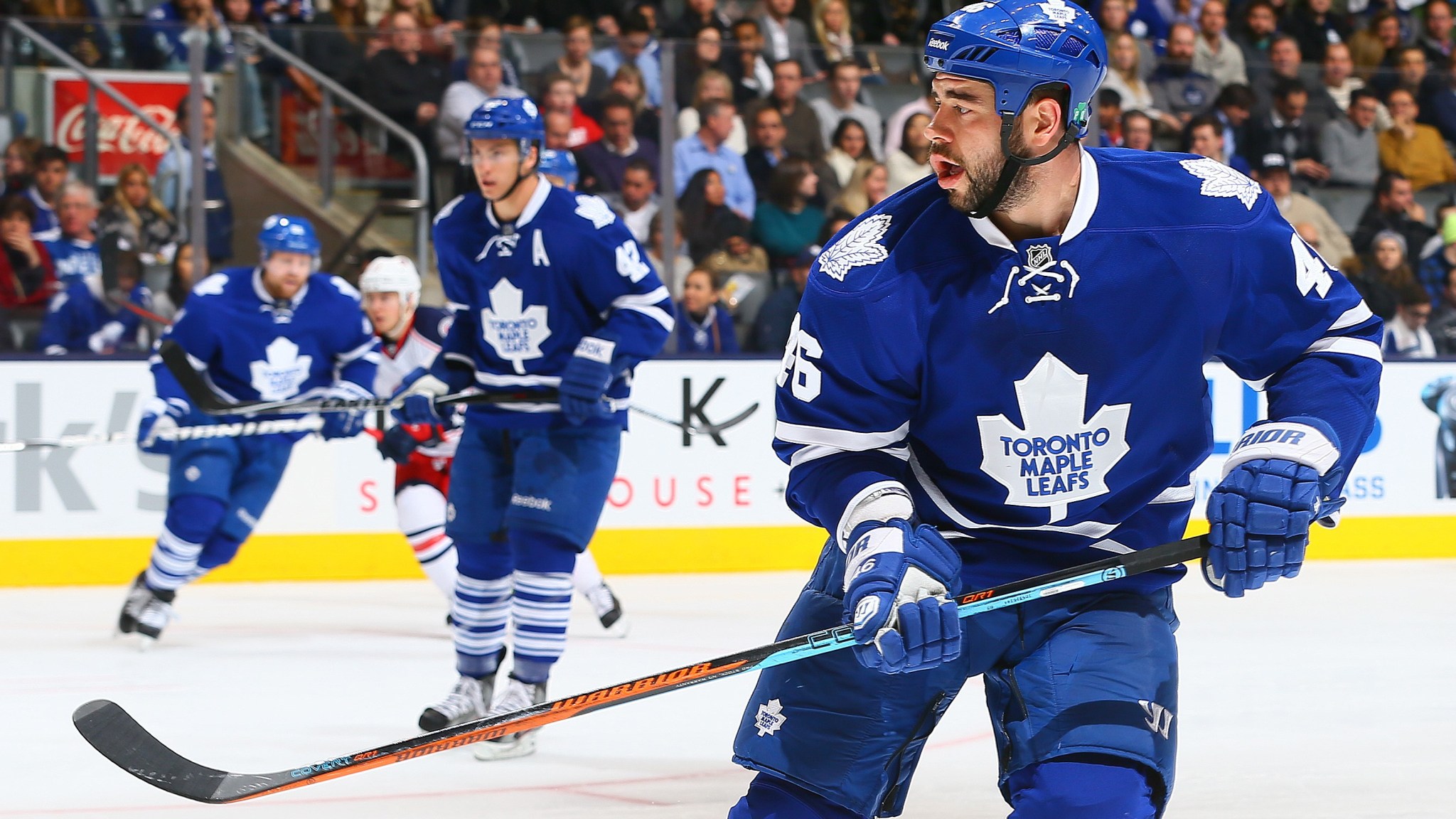 Theme of the Week: Decision Day Looming for Maple Leafs

We saw our fourth coaching casualty of the year last week, and it was the one everyone had been expecting for seven months. The Maple Leafs finally fired Randy Carlyle, replacing him on an interim basis with Peter Horachek.

It was a move everyone assumed was coming last offseason, when newly appointed Maple Leafs president Brendan Shanahan made the surprising decision to extend the beleaguered Carlyle instead. The move was widely panned at the time, and in the months since, I’d yet to find a single person in the hockey world who thought Carlyle would last past this season.

So yes, you can criticize the timing here. But Carlyle’s firing had become inevitable, and doing it now was a far better option than waiting until the offseason. That’s because Shanahan’s most important task over the next 40 games — more important than finding a new coach, more important even than making the playoffs — is to thoroughly evaluate the core of his roster. Can these players, properly supplemented with future acquisitions, form the foundation of a championship contender?

It’s a question that needs to be answered with clear eyes and none of the silly wishful thinking that’s pervaded the organization over the years. And it’s one that simply couldn’t be answered with Carlyle behind the bench, because there’s plenty of evidence the coach was a big part of the problem. In Carlyle’s nearly three years in Toronto, the phenomenon repeated itself over and over: players would arrive in Toronto and their performance would drop; they’d leave and their performance would improve. Maybe that was Carlyle’s fault, or maybe there’s some other factor at play. But Shanahan couldn’t move forward without knowing, and now he has half a season to find out.1

Over the next three months, the Maple Leafs might discover that their core, led by Phil Kessel and Dion Phaneuf, really can grow into a winner — there have been encouraging sign over the first few games under Horachek, during which the team’s well-documented defensive woes haven’t been nearly as apparent. That would be good news for Toronto, considering that there’s little in the way of reinforcements coming from the team’s meager farm system and most of the roster’s top players (and a few beyond that) are locked into long-term contracts that have the Leafs straining the upper limits of the salary cap.

Of course, we’ve seen plenty of evidence over the years that the answer may be no; maybe it turns out that the core this franchise has spent several years and millions of dollars assembling just isn’t good enough and never will be. If that’s the case, then Shanahan has no choice but to tear it all down and start over. He’s preached patience since arriving in Toronto, and in some sense that’s been an admirable approach, but you can’t be patient with a wrecking ball. While it’s long been argued that Toronto fans would never accept a full-scale rebuild, Shanahan may have the résumé and the charisma to sell one. After a full decade without a playoff series win, he may not have much choice.

In either case, the good news is that this organization has finally given itself the chance to find out what it’s working with. The bad news is that it may not like the answer or what will have to come next.

5. Anaheim Ducks (27-10-6, plus-3 goals differential): For weeks we’ve been saying “The Ducks’ numbers aren’t all that great,” while always having to add “but they’re still all alone in first place overall.” Now they’re merely tied for first place, so screw ’em.

4. Tampa Bay Lightning (27-12-4, plus-29): They return to our list after a three-week absence, thanks to winning seven of eight and moving into first in the East.

1. Chicago Blackhawks (28-13-2, plus-39): They lost to some bad teams this week, and if you wanted to argue that the Predators should be in this spot instead, I’m not sure I’d be able to do a great job of talking you out of it.

The biggest change this week sees the surging Lightning bump the Penguins out of the top five, leaving us without a Metro team on our list for the first time since the season’s second week. It’s a close call. You could certainly make a case that the Penguins still deserve a spot despite a recent cold spell. And maybe the Islanders should move back onto the list, having reclaimed first place in the division thanks to a pair of weekend wins.

But you could also argue that neither the Penguins nor Islanders is even the division’s best team anymore. Maybe it’s time to start talking about the New York Rangers.

When I revisited my preseason predictions last week, I said this year’s Rangers were having a “decent season” and compared them favorably to last year’s team that came within three wins of a Stanley Cup. I thought that was pretty good. Rangers fans did not, flooding me with both polite feedback about how I’d disrespected their team with faint praise and helpful suggestions about what I could do to myself to make amends.

They may have a point. The Rangers are the league’s hottest team, winning five straight and 13 of 14. And they’re not exactly racking up those wins over lightweights; last week, they swept a three-game trip through California, earning regulation wins over the Ducks, Kings, and Sharks. They’re tied with the Lightning for the best goal differential in the conference, and they have multiple games in hand on everyone ahead of them in the standings.

Despite all of that, the Rangers are just third in the Metro, and if the Capitals earn a point tonight they will knock New York back into a wild-card spot. Rangers fans will point out that the team had to weather some significant injury problems earlier in the season, and that’s fair, but there are other areas of concern. Their possession stats are still just OK, and they’re riding a bit of a shooting percentage–fueled PDO wave right now, which we can assume won’t last.

Still, the recent hot streak is impressive, and they’re not far from the elite-team conversation. And if they’re really the Metro’s best team, they’re about to get a chance to show us — they face both the Islanders and Penguins this week.

5. New Jersey Devils (15-21-8, minus-28): The Devils narrowly hold off the Flyers and Blue Jackets to maintain the fifth spot.

4. Arizona Coyotes (16-21-4, minus-39): The bad news: The Coyotes are terrible. The good news: If they win the lottery and pair McDavid with Max Domi, they may never lose another game.

2. Edmonton Oilers (10-24-9, minus-48): They blew out the Blackhawks on Friday, because nothing in this world makes any sense.

1. Buffalo Sabres (14-26-3, minus-66): With no points in their last seven games, the Sabres are back in the top spot and might just stay here the rest of the year.

I’m not kidding about the Sabres, by the way. They’re awful, and they rank at the bottom of the league in just about everything other than points. They’re the only team averaging fewer than two goals per game. They’re leading the league in goals allowed per game. They’re last in shots allowed and last in shots taken. And they’re not only the worst team in terms of 5v5 Fenwick, they’re the worst by a mile; the Avalanche, the second-worst team, are closer to cracking the top 10 than they are to the Sabres. That’s bad.

My favorite recurring moment of this season has been the way that fancy-stat analysts who generate graphs now have to do two versions: one with the Sabres and one without, because including Buffalo throws off the rest of the graph and makes it hard to read.

The 2014-15 Buffalo Sabres: so bad, we make it impossible to demonstrate how bad anyone else is.

• The NHL released the full All-Star rosters on Saturday, and nobody seems all that happy with the results. The league went back to the “minimum one player per team” rule it had wisely discarded years ago,2 meaning we’ll get to see Ryan Nugent-Hopkins instead of Pavel Datsyuk or Nicklas Backstrom, and Justin Faulk instead of P.K. Subban. But look on the bright side: Even though we won’t get the league’s most entertaining players, at least we’ll get to enjoy horrifically ugly uniforms.

• One All-Star who may not make it to the game in two weeks is Jimmy Howard, who left Saturday’s game on a stretcher with an apparent groin injury. He’s been placed on IR, although there’s no official word yet on how long he’ll be out. The Wings dropped the game 3-1 to the Capitals.

• The Flyers also lost a goaltender when starter Steve Mason went down with a knee injury on Saturday against Boston, but he will reportedly only miss one to two weeks. The Bruins won that game, 3-1, and have now won three straight to move back into a playoff spot.

• It was another tough weekend for officials. After last week’s puking incident, this week saw referee Dean Morton break a rib in an ugly collision during Friday’s Leafs win over the Blue Jackets.

• One more injury: The Kings lost rookie Tanner Pearson to a broken bone in his leg after he hit the boards feetfirst on Saturday against Winnipeg. The Jets won that game in overtime to move ahead of the Kings, and the teams hold down the West’s two wild-card spots.

• Henrik Lundqvist set an NHL record on Saturday, becoming the first goalie in league history to win 20 games in each of his first 10 seasons.

• Finally, congratulation to Teemu Selanne, who had his no. 8 retired last night during a lengthy pregame ceremony in which Gary Bettman was booed because Anaheim fans are awesome.