NHL Weekend: Time for a Makeover 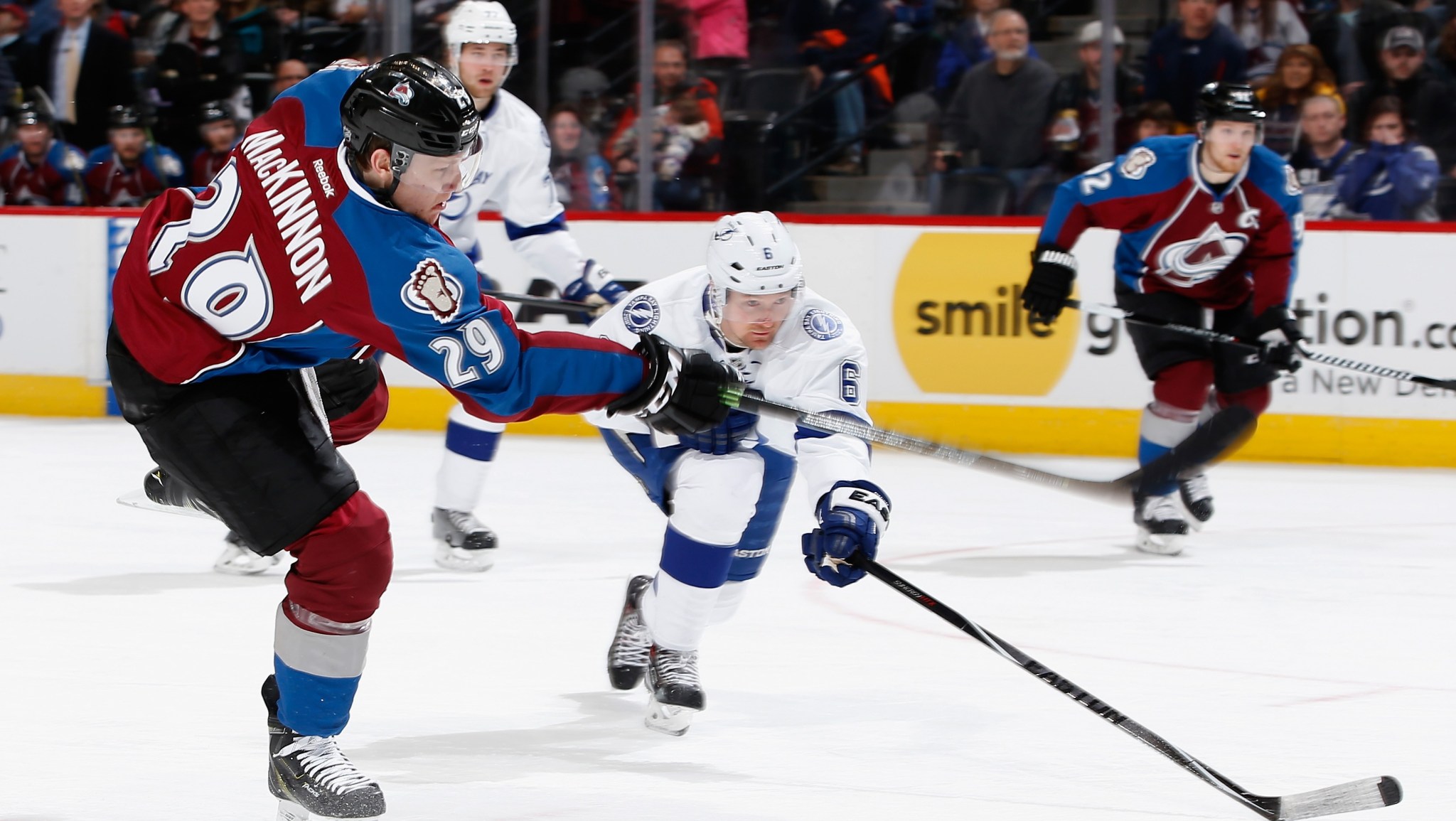 Theme of the Week: The NHL Gets Enhanced

It was a bit of an odd weekend in the NHL, in that two of the league’s most interesting stories didn’t come from inside an arena. There was Saturday night’s marquee game between the Sharks and Kings, played outdoors at Levi’s Stadium. And then there was another event, also held at Levi’s Stadium, one day earlier: the unveiling of the league’s long-anticipated project to modernize the presentation of stats on the league website.

OK, so your mileage may vary when it comes to that last one falling into the “interesting” category. There’s still a large segment of fans who tune out immediately when they hear the term “advanced stats” (or, as we’re apparently calling them now, enhanced stats). But for those who’ve followed the game’s winding path toward better numbers, one that began in small corners of the online world and eventually invaded front offices around the league, the announcement was big news.

It’s fair to say that the reviews have been mixed. The league’s plans, as detailed here, are ambitious and long-term. Over the weekend, they rolled out the first phase, which sees a redesign of the league website’s existing stats section and the addition of new categories and tools. Over time, the plan is to have updated stats that cover the league’s history. That’s been a labor-intensive project, with old game sheets being entered by hand by a small team over five years, but it could pay off in some fascinating insights. (And if you think people get angry about this stuff now, wait until the numbers try to tell us that some beloved hockey legend from a previous generation wasn’t as good as we remember him.)

There have been objections to the way the NHL has handled all this, with some feeling as if the league is whitewashing the online world’s contributions while pretending it came up with all this stuff on its own. (The project’s head told me that it didn’t consult with any of the top names in the stats world, although the group was familiar with their work.) Some aren’t happy that the league is renaming a few key stats. And others just don’t trust the league to do right here, assuming it will eventually try to turn all of this into a proprietary moneymaker.

There’s some validity to those concerns. But the bottom line is that the league is pushing forward with something that lots of fans have been asking for. If they can get to where they say they want to go, we’ll have better stats in one easy-to-use spot. They’re not there yet, but even seeing them try feels like a big step, one that would have been hard to imagine even a year ago.

5. New York Islanders (39-20-2, plus-18 goals differential): The top four teams in the Metro are now separated by four points, but I’m going with the Islanders here because I like it when Rangers fans yell about games in hand.

4. Montreal Canadiens (38-16-5, plus-22): It’s time to start having the Carey Price–for-Norris discussion in earnest. Hell, maybe the Calder too.

3. Anaheim Ducks (37-16-7, plus-8): The dream of finishing first overall with a negative goals differential isn’t dead yet, but it’s fading. Somebody beat them 12-0, please.

2. St. Louis Blues (38-17-4, plus-35): Do you think Ken Hitchcock’s motivational speeches involve anything other than repeatedly yelling, “Start winning or else we play the Blackhawks in Round 1”?

With due respect to this week’s top five, let’s talk about a team that was supposed to be there with them. In my preseason preview column, I made what felt like a bold prediction: The Boston Bruins would lose three games or fewer over the course of the Eastern Conference playoffs. Right now, it looks like there’s a good chance it’s fewer. As in, zero losses. Because right now, there’s a good chance that the Bruins aren’t going to make the playoffs at all.

That would have seemed unfathomable heading into the season, and even as the team stumbled through a lackluster first half, it seemed inevitable that they’d right the ship. After all, Zdeno Chara had been hurt. And the shooters were sure to start finding the net again. And even if they didn’t, Tuukka Rask could win enough games on his own to get them safely into a playoff spot in a weak conference. This was still largely the same team that had dominated the conference for years. It was no time to panic.

With 23 games left, panic time seems to have arrived. The Bruins came into yesterday’s action reeling, having lost six straight and seeing the Panthers creep to within one point of their wild-card spot. On Saturday, rookie goalie Malcolm Subban made his NHL debut against the Blues, but was yanked after giving up three goals on three shots in the second period.

They earned some breathing room yesterday with an impressive 6-2 rout of the Blackhawks, powered by three points from Patrice Bergeron and a strong performance from Rask. It was Boston’s best game in weeks, one in which they looked every bit like the title contender they were expected to be.

So why haven’t they looked that way more often? In hindsight, the team went into the season on much shakier ground than most of us realized. A series of questionable signings created a tight cap situation and forced some tough choices, and those choices stripped the team of much of its depth. The roster looked strong enough that they’d still be in good shape if everything held together. But when injuries started to pile up, there weren’t enough reinforcements to weather the storm, and these days they often seem like a team that can’t get its focus back.

There’s still plenty of time for the Bruins to get back into a groove, and yesterday’s win gave their fans plenty of reason for optimism. If they do make the playoffs, wild card or not, they’ll be an opponent that nobody wants to face in the first round. But if not … yikes. There have long been rumors that a playoff miss would cost head coach Claude Julien his job, and lately there have even been suggestions that general manager Peter Chiarelli could go too. That would be a stunning turn of events for what had seemed like one of the league’s model franchises.

5. Carolina Hurricanes (21-30-7, minus-27): They won twice this week, including one over the Maple Leafs, so we’ll punish them with their lowest ranking of the year.

4. Toronto Maple Leafs (24-31-5, minus-16): Saturday’s win was Peter Horachek’s third in his first 20 games as Leafs coach, preventing him from joining the 2-for-20 club with Dave “Sparky” Allison.

2. Edmonton Oilers (17-34-10, minus-66): To their credit, they played the Ducks tough in a 2-1 loss on Saturday. But they’re still sitting at just one regulation win in February, and sources tell me that’s bad.

Last week we looked in on the league’s buyers and sellers in the wake of a pair of significant trades. So today, let’s update the transaction tracker with all of the trade action from this past week.

Yes, just a week before the deadline, the league managed to go a full week without making a single deal. That’s not actually all that unusual — last year, there was almost three weeks between deals at the end of February, and in 2013 there was a one-week gap before things got rolling. But it does squash the theory that this year’s McDavid-inspired race to the bottom would lead to the league’s worst teams selling early in an effort to strip down for the stretch run. Instead, we’ll apparently get business as usual.

That should mean plenty of trades over the next week, although most of those will be relatively minor. Get ready for lots of conditional seventh-round picks to change hands (in which the condition is that we all agree that we can’t say the GM didn’t make any deals). But with a handful of reasonably big names still out there, highlighted by Keith Yandle, Andrej Sekera, and maybe even Jaromir Jagr, we should see some significant moves.

We’ll do a full deadline preview later this week. In the meantime, enjoy what’s probably our last few moments of peace and quiet.

• How was your weekend? If it didn’t involve taking a Zdeno Chara slap shot to the groin, it was better than Niklas Hjalmarsson’s.

• The weekend’s biggest game, at least in terms of hype, was Saturday night’s Stadium Series matchup at Levi’s Stadium, in which the Kings held on to edge the Sharks 2-1. We’ll have a full report on that game later today.

• The Dallas Stars continue to be the league’s most entertaining team, which is the good news. The bad news is that they dropped a 7-6 overtime decision to the Red Wings, denting their playoff hopes. Still, the game was plenty of fun, and the final score had even those who played in it wondering what they’d just seen.

• Canucks goalie Ryan Miller left yesterday’s win over the Islanders early in the second with a lower-body injury. Backup Eddie Lack came in to finish off the shutout in a 4-0 win.

• Washington’s Eric Fehr may be a warlock.

• After being all but counted out, the Flyers are making a late playoff push. After yesterday’s win over the Capitals, they’re now just four points back of the Bruins. A week ago, GM Ron Hextall said they wouldn’t be buyers; let’s see if he’s changed his mind.

• The Senators have also been making a charge, although this one will fall into the “too little, too late” file. A good summary of the current state of affairs in Ottawa can be found here.

• The 1980 “Miracle on Ice” team reunited over the weekend in Lake Placid, the first time the team had been back to the scene of the most famous game in U.S. Olympic hockey history.

• Finally, let’s all take a moment to mourn the NHL career of Ilya Bryzgalov, which may be over after he was waived by the Ducks yesterday. Like him or not, he was a true character who gave us plenty of fun moments. Remember, Ilya: Is only game.