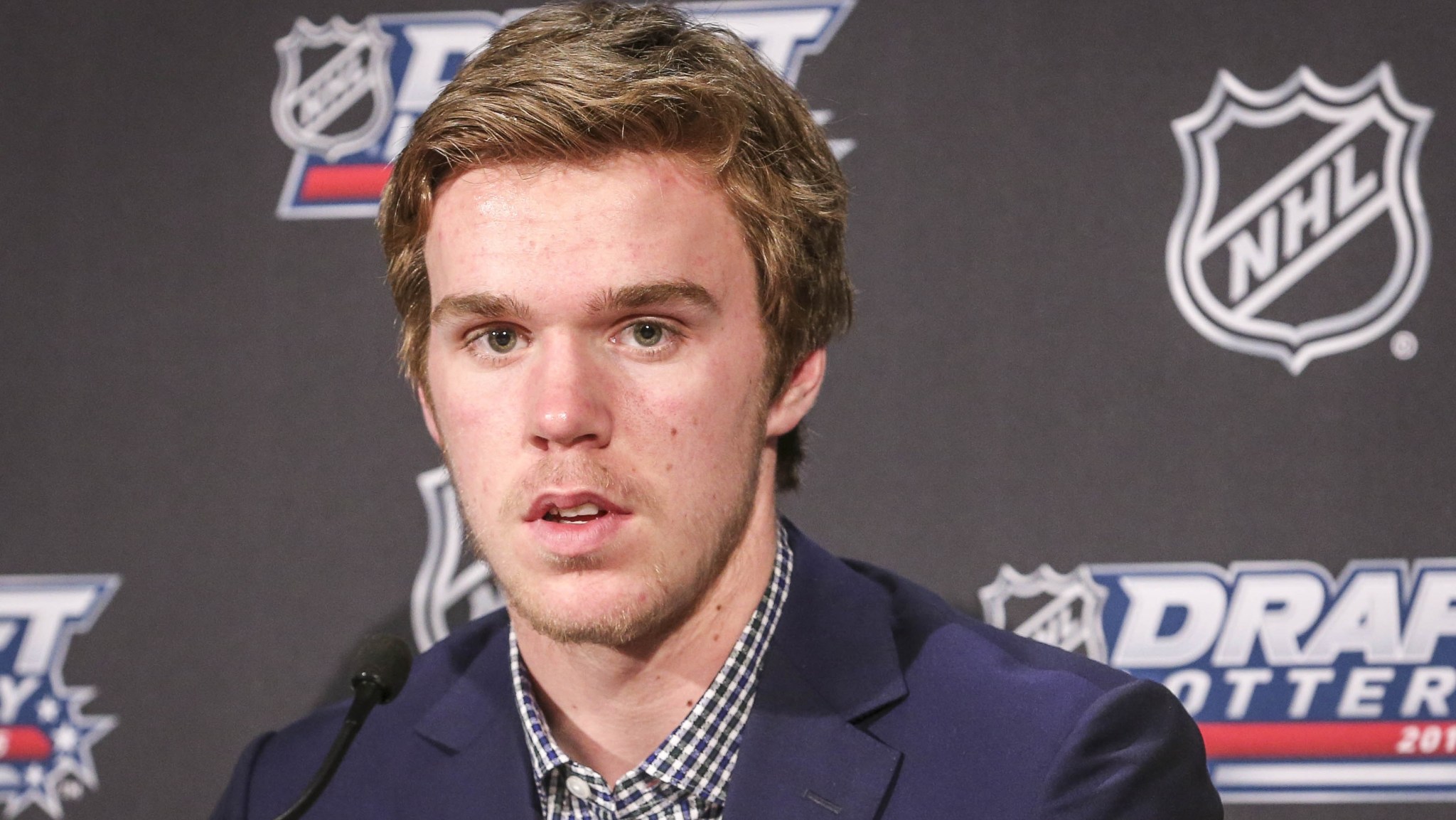 The NHL held its draft lottery Saturday and you probably heard about the results, assuming you know any hockey fans and were wondering why they were swearing loudly while punching holes into their TV screens.

Yes, the perpetually awful Edmonton Oilers won the draft lottery yet again, “earning” the first overall pick for the fourth time in six years.1 And this year, it’s a big one; the Oilers will get the chance to pick Connor McDavid, the teenage prodigy who almost everyone views as the best prospect to enter the league since Sidney Crosby.

Needless to say, not everyone is thrilled about this.2 So let’s take some time to sort out the winners and losers from an evening of Ping-Pong balls and bitter tears.

Winner: Edmonton Oilers — McDavid is a very good hockey player, and he will probably make the Oilers a better hockey team. This is the kind of hard-hitting analysis you look to me for.

There’s honestly not much more to add here; McDavid projects as a generational player, the kind who turns franchises around almost single-handedly. The Oilers still have holes all over their lineup, most notably in net and along the blue line, and the team will someday have to figure out how to surround their talented young forwards with the right depth pieces. So yes, there’s work still to be done in Edmonton. But the hockey gods just gave the Oilers’ perpetual rebuild a great big boost.

Winner: Oilers fans — Another obvious one. After all, no fan base in the league has suffered as much over the last quarter-century. Since winning their last Stanley Cup in 1990, the Oilers went from powerhouse to glorified farm team under the league’s old financial system. Since the cap arrived, they’ve only made the playoffs once, a miracle run that went all the way to the Stanley Cup final in 2006 but ended with a heartbreaking loss in Game 7 after their star goalie got hurt. Since then, they’ve been stuck in rebuilding mode for nine consecutive years. It’s not Oilers fans’ fault that management and ownership was incompetent, the argument goes, and they deserve to have something good happen to them for a change. All of which is true. Except …

Winner: Oilers management — … you have to wonder if winning the lottery hasn’t also doomed Oilers fans to that same awful management group for a while longer. After years of failure, Kevin Lowe and friends had to be hanging by a thread — if the team wasn’t going to clean house in the summer, it was only one more lost season away, at most. Now they have McDavid, and the heat gets turned way down. So Oilers fans end up with a franchise player, but it could come at the cost of a few more years of the status quo in the front office.

If you’re an Oilers fan, do you take that trade-off? Uh, yeah. In a second. But it’s probably the only flaw in the McDavid diamond, so it’s worth a mention.

Loser: The NHL — Oilers fans won’t want to hear it, but the truth is that McDavid winding up where he did is probably the worst-case scenario for the league, and everyone outside of Edmonton knows it. He doesn’t go to a major media center where his presence would be most likely to generate a revenue surge for the league. But he also doesn’t go to a struggling market where he can be the savior who brings stability to a franchise that needs it. He’s not exactly going to disappear into obscurity — it’s worth remembering that Wayne Gretzky did just fine in Edmonton — but this wasn’t the result the league would have wanted.

All of which leads us to …

Loser: Conspiracy theorists — There was a ready-made conspiracy all set to go for just about any lottery winner — except Edmonton. Say what you want about the NHL, but at least we know one thing for sure: The league absolutely positively did not rig the lottery.3

Loser, but only a little: Buffalo Sabres — The Sabres tanked their entire season to get the no. 1 pick and came away without it, so it’s tempting to view them as the night’s big losers. Even GM Tim Murray didn’t hide his disappointment. But the Sabres still come away with the no. 2 pick, and this year that means Jack Eichel, a player who’d be the clear no. 1 in just about any other year.4 He’s not McDavid, but he’s a hell of a consolation prize. And since the NHL stupidly insisted on going with a system that guaranteed the 30th-place team a top-two pick, the Sabres were never at risk of losing out on a franchise player. They didn’t win the lottery, but their lost season still ended up as mission accomplished.

Loser, big time: Arizona Coyotes — On the other hand, you have the Coyotes, who dropped from no. 2 to no. 3 in a draft with two franchise players. They’ll still get a very good prospect, most likely defenseman Noah Hanifin or forward Dylan Strome. But they went in knowing there was a good chance they’d get bumped out of their top-two spot, and that’s exactly what happened. That’s a tough break for a team that went to great lengths in the second half to challenge the Sabres for 30th and came within a few losses of pulling it off.

Winner: Anti-tankers — Hey, you complained all year about how the Sabres were tanking, with teams like the Coyotes and Maple Leafs eventually joining in. Say what you will about the Oilers struggles, but they didn’t tank. And, in fact, if you’re a fan of the gold plan,5 the Oilers would have earned the top pick based on their end-of-season wins. So … karma?

Loser: Fans of good TV — Interest in this lottery was huge, and the four-ball format gave the league a perfect opportunity to create some must-see TV. Drawing the balls on a live broadcast, one at a time over the course of a half-hour or longer, would have had fans around the league on the edge of their seats. Instead, we got a half-hour of time-filling interviews, followed by Bill Daly awkwardly opening envelopes. The actual drawing was held behind the scenes and took roughly eight seconds — no drama, and not even enough time for anyone involved to check the results as they went.

Why wouldn’t the league make a bigger deal out of the actual drawing? Reportedly, it didn’t like all the focus on the bottom of the standings and decided to be as low-key as possible. That’s classic NHL — don’t fix the problem, just try to spin your way out of acknowledging it exists.

Winner: Lottery reformers — Nobody outside of Edmonton is especially happy with Saturday’s results, which means we might finally get a push for some meaningful change to the league’s lottery system. No, it probably won’t be the sort of radical overhaul we proposed a few weeks ago. But there’s at least a chance we’ll get a system that limits how many high picks one team can get within a specified period. That won’t fix the league’s lottery problems, but it will help.

Winner: Trade fans — Here are two things we know: Oilers GM Craig MacTavish long ago promised he’d be “bold” when it came to making trades to get his team back into contention, but he hasn’t delivered yet. And Murray is on the record saying he’d try to trade up if the Sabres dropped to no. 2.

So, do we have a potential match here? Could the Sabres and Oilers pull off one of the great pre-draft blockbusters of all time?

Probably not. In fact, MacTavish has already ruled out moving the pick without even hearing a single offer. That doesn’t sound especially bold, although it’s hard to blame MacTavish if he doesn’t quite trust himself to get in the ring with a crafty GM like Murray. But we should at least get a crazy rumor or two involving the McDavid pick over the next few weeks, and winning the lottery may free up the Oilers to move one of their other young forwards for help in goal or on defense.

That’s not much, but in a league where timid GMs have rendered big trades nearly extinct, it’s something.

To be determined: Connor McDavid — I know, I know, you’re expecting a “loser” label here.6 After all, McDavid is going to an organization that hasn’t shown much indication that it knows how to build a winner around him, and he sure didn’t look happy about it Saturday.

But that’s not really fair. For one, McDavid’s stoic expression was probably nothing more than the result of his years of “good Canadian boy” training to never show emotion over anything. And while the Oilers have indisputably been awful for years, they wouldn’t be the first team to finally turn things around thanks to a shiny new franchise player. The Penguins were awful for years pre-Crosby. Same with the Hawks and Kings before their stars arrived.

Is McDavid happy to be there? We’ll never know, because even if he wasn’t, he’d be too smart to tell us. But as much as we love to talk about stuff like fan bases and weather and local media and endorsement deals, hockey players tend to be happy wherever they can win. It really is that simple. If McDavid is the player we all think he is, then he’ll help the Oilers get back to winning. And if the Oilers are winning, Connor McDavid will probably be just fine, thanks.

So what else happened this weekend? Oh, right, they played a few hockey games. Let’s do a quick roundup of where we’re at with various playoff series.

• One team is already facing elimination. That would be the Senators, who dropped their second straight overtime loss to the Habs last night and are now down 3-0 in the series. The teams are off until Wednesday in Ottawa, when Montreal will have a chance to punch its ticket back to Round 2.

• The only other winless team: the Jets, who are down 2-0 to the Ducks heading into Game 3 tonight in Winnipeg. Anaheim has trailed both games after two periods, but has outscored the Jets 5-0 in the third to win both in regulation. The Jets should get a big boost from the home crowd in what will be the first playoff games in Winnipeg in 19 years.

• Three series are tied 1-1. The Wings and Lightning, Rangers and Penguins, and Blues and Wild have each split their first two games. The latter two series will be back on the ice tonight; Detroit hosts Tampa Bay tomorrow.

• The Hawks lead the Predators 2-1, and Nashville may be in trouble, with Shea Weber hurt and Pekka Rinne struggling. Chicago leads despite making a goaltending switch, with backup Scott Darling taking over for starter Corey Crawford.

• Also up 2-1: the Islanders, thanks to a quick overtime goal by John Tavares, who ended things just 15 seconds into yesterday’s extra session. And the Flames lead the Canucks 2-1 after last night’s 4-2 win. So far, that series has featured plenty of bad blood, highlighted by Friday night’s wild line brawl.

How Does Tim Tebow Fit Into the Chip Kelly Offense?