NHL Viewing Guide: WE BELIEVE IN YOU, COLUMBUS 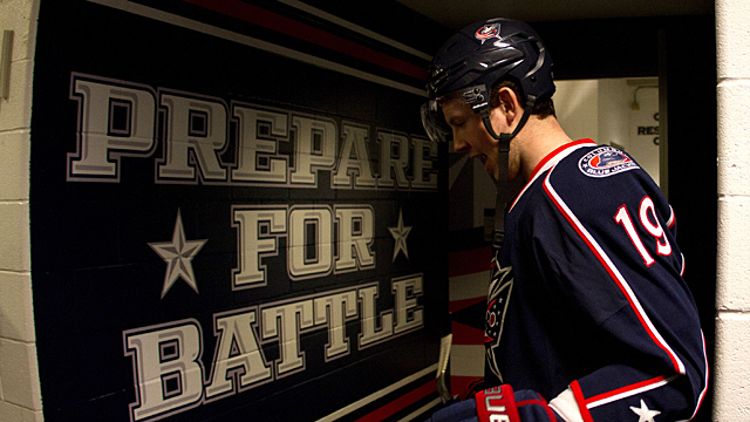 There are umpteen NHL games going on at any given time, and it’s always hard to know how to allocate your attention. Here are our recommendations for the most interesting of the week’s many matchups.

It was only last June that the Rangers and Devils were facing off in the Eastern Conference finals, but it might as well have been forever ago. This season, the two teams have both found themselves mired in mediocrity, with their playoff odds currently lingering at 54.8 percent (Rangers) and 49.8 percent (Devils), according to Sports Club Stats, though they have taken different paths to get here.

The Devils began the season by wiping those chips off their shoulders; they seemed hell-bent on proving that their Cup run had not been a fluke, and that they could live in a world without Zach Parise. They briefly reigned in the East. Then 40-year-old Martin Brodeur got injured, and Travis Zajac began playing slump-watch hockey, and the team has gone 3-6-2 since.

The Rangers had no such early-season rises, more so bobbing haphazardly around eighth place all year as if they’re all passengers on a mildly leaky vessel. Sometimes you swear they can see the shoreline, and other times you’re ready to feed them all to the sharks. With Marc Staal out indefinitely after taking a puck to the eye against Philadelphia earlier this month, the team’s defense has been forced to reshuffle, while offensively things have yet to fully click. (The occasional exception to this has been the combination of Carl Hagelin and Rick Nash.)

Get used to seeing Rangers-Devils, hockey fans: Of the five games remaining that will be broadcast nationally by NBC proper on weekends, two are New York–New Jersey. This week, New York will be playing in the second night of back-to-back games, having defeated Carolina in overtime Monday. “It means nothing if we don’t back it up in Jersey,” Ryan Callahan said after the game. You can always count on Rangers-Devils to be a heated rivalry — right down to the coaches.

Not only did “Who’s better: Ovechkin or Crosby?” used to be a legitimate and spirited question, there was a time not so long ago when it comprised the whole of the NHL’s marketing strategy.

These days, there isn’t a debate: Crosby handily leads the NHL in scoring with 48 points, a pace of 1.60 per game, good for approximately 131 points in an 82-game season. (Third in the league is his linemate, Chris Kunitz.) In the last few weeks he’s been called “the best player on the planet” (Pierre LeBrun), without question “the best all-around player in the game” (Wayne Gretzky), and a “Mount Rushmore” candidate (Greg Wyshynski).

Ovechkin, meanwhile, draws labels more like “the Alex Rodriguez of the NHL,” according to a thorough Washington Times piece about the changing nature of Ovi’s game. The NBC crew have been on his case for weeks. It’s unfair and largely incorrect of them, but it doesn’t seem to rile Ovechkin up. “I’m not mad at Milbury or McGuire,” he said in the Times piece. “Right now they hate me and right now they don’t like me, and tomorrow they’re gonna give me a big kiss and big hug. It’s real life.”

I WILL ALWAYS BELIEVE IN THE BLUE JACKETS. I MISS ARTEM ANISIMOV. MARK MY WORDS, COLUMBUS WILL RISE ONE DAY. The Blue Jackets haven’t lost in regulation (note, this is known as “Blackhawking”) since February 24, 10 games ago! (Nine of those games, insanely, have gone into overtime or a shootout.) Sergei Bobrovsky is second in the league with a save percentage of .932!

Sure, they may be in last place in the Central Division, and Sports Club Stats may estimate their playoff chances at a meager 9.1 percent, and their possession numbers might be pretty atrocious — but this is a team on the move, I just know it. And have you seen the clusterfuck that is the Western Conference? The eight teams battling for the bottom three playoff spots are separated by just five points in the standings. I believe. Nashville, on the other hand? They’re also one of those eight teams, but more importantly, they’re just trying to move on from this atrocity.

This two-game series is not to be missed.

Other games to check out:

The Minnesota Wild’s big offseason acquisitions have been sticking to their end of the agreement: Ryan Suter has two goals and 21 assists, while Zach Parise is right behind him with 22 total points. The Red Wings, meanwhile, are hoping to find better separation in the standings between them and the mass of teams clustered on the bubble. They’ll have to do it without “the best third-line center in the NHL” — Darren Helm — who had hoped to return against Minnesota, but has suffered a setback and isn’t expected to play Wednesday.

In an in-depth column on the state of the San Jose Sharks, Pierre LeBrun notes the wacky Western Conference standings situation as being one of the key challenges the franchise is facing. That’s because, with just under half the season to play and the April 3 trade deadline approaching, the Sharks have to decide whether to aim for their 10th postseason appearance since 2004 or make some changes to the structure of their team. Regardless of what they do, this game represents a glimpse into the future: Not only does it feature some of the game’s young stars (Logan Couture; a manufactured-romance hating Taylor Hall), it’s a preview of what will be a new conference rivalry under the revamped NHL realignment system. So far this season, the two teams have battled to the bottom in one key area: The Oilers, as a team, were as of Monday shooting 6.3 percent five-on-five. The only teams struggling more? Ottawa and San Jose. Hey, maybe it will be a high-octane, 1980s-style shootout. Law of averages!

I always perk up when I see this matchup, secretly hoping for a reprisal of this.