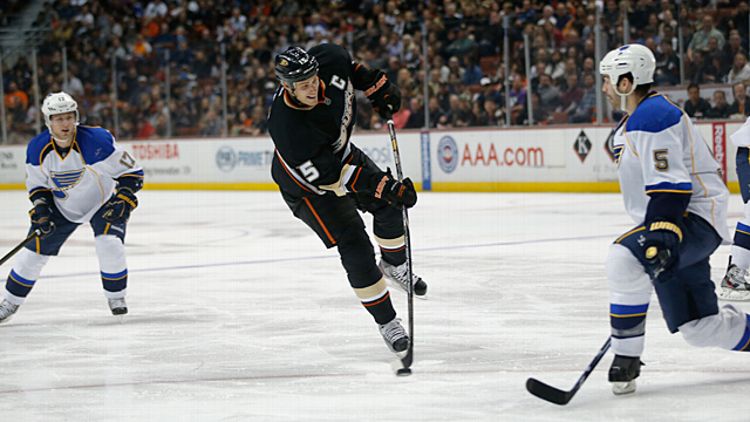 There are umpteen NHL games going on at any given time, and it’s always hard to know how to allocate your attention. Here’s our recommendation for the most interesting of the week’s many matchups.

When the Chicago Blackhawks’ prosperous romp through the NHL was finally stopped by the Colorado Avalanche on Friday — and stomped on by the Edmonton Oilers two days after that — the most noteworthy thing atop the Western Conference standings wasn’t that Chicago had taken some sort of Secretariat-style lead on its opponents — it was that after all that, the Blackhawks actually weren’t very far ahead of the flying-under-the-radar Anaheim Ducks.

“Everybody was stuck on Chicago,” Los Angeles Kings coach Darryl Sutter correctly pointed out at a Monday-morning skate. “Well, Anaheim is right on Chicago.”

The Ducks trail Chicago by six points in the standings, but they’ve played two fewer games. Both teams have more points than anyone in the East. They’ve scored just as many goals as the Blackhawks this season, and have allowed only four more. Alex Ovechkin has become as distant a memory for Ducks coach Bruce Boudreau as Ryan Getzlaf’s paltry 11-goal 2011-12 season has become for Ryan Getzlaf. (The captain, who would have become an unrestricted free agent after this season, has already netted 10 goals in 24 games this year, and he agreed to an eight-year, $66 million contract with Anaheim on Friday.)

To get all scientific about it, things just seem to be rolling. On Sunday night, Bobby Ryan was whistled for a questionable tripping call, and the St. Louis Blues scored a go-ahead goal during the subsequent power play. Later in the game, a puck hit off the back of Getzlaf’s leg and found its way directly to Ryan’s stick. He tied the game, and a couple of minutes later, Corey Perry won it.

Everything’s been coming up Anaheim. But these good bounces and hot sticks and breakout goalies like Viktor Fasth aren’t all things that can always be counted upon to endure.

One key place where the Chicago-Anaheim comparison breaks down is in their puck possession. The Blackhawks have found success this season in large part because they control the flow of the game so well and take the lion’s share of attempted shots. You can’t say the same about Anaheim. I love Boudreau and the Ducks, Bobby Ryan is an American hero, etc. But it’s interesting that they’re playing Minnesota on Tuesday, because the last team to have such a disconnect between outward success and underlying uncertainty was the 2011-12 Wild, and we saw how that went.

Still, the Ducks have two things comparatively in their favor: They’re not injury-stricken like that Minnesota team was, and the short season just serves to squeeze the cushion they’ve built for themselves and make it more plump. At this point, by my back-of-the-envelope calculations, they could go something like 6-14-4 in their last 24 games and probably still make the playoffs. But even if the unthinkable happens and the Ducks do end up careening the way last season’s Wild did, they can just take their lead and sign a pair of big-time free agents. Like the Wild, they’ll find their way back to first in the conference in no time! And hey, after locking up Getzlaf, they’re already halfway there.

The battle for the top spot in the Eastern Conference is becoming a jostling three-team weave featuring the Bruins, the Penguins, and the currently-in-first-place Montreal Canadiens (more on them shortly), and Tuesday night’s contest is a big opportunity for the Bruins to elbow their way out in front. Boston trails Montreal by a point, 37-38, in the Northeast Division standings, but has played three fewer games, while the Penguins lead the Atlantic Division with 36 points.

While the two teams have accumulated an almost identical goal differential this season — the Penguins have outscored their opponents by 21 goals, the Bruins 20 — they’ve done so in very different ways. The Penguins lead the league in offensive production: Sidney Crosby has accumulated 45 points in 26 games, for starters, and he’s done it with almost no fanfare. (Some of the numbers laid out by Elliotte Friedman are pretty eye-opening.)

But as was the case late last season, the Penguins’ goaltending has been shaky, and the result is a lot of 5-4-ish final scores. (In one game against Montreal earlier this season, Pittsburgh won 7-6 in overtime. Bring back the ’80s!) The Bruins, on the other hand, have the league’s third-stingiest defense in terms of goals allowed per game, thanks in large part to noted chicken wing enthusiast Tuukka Rask.

Both the Penguins and Bruins have one thing in common: They’ve benefited from having a hot hand. Chris Kunitz has scored 17 goals and 36 points this season for Pittsburgh, while Brad Marchand has contributed 12 and 20 for Boston; each player has netted four game-winners. (Both guys are also scoring on roughly 28 percent of their shots — something close to double their career averages. Survey says things might settle down.)

PS: I have to admit, I’m mildly devastated that this game is being broadcast nationally, because it means I won’t get to toggle between two of the most, shall we say, enthusiastic announcers in hockey. Seriously, we all know there’s a 100 percent chance that something controversial will go down in this game, and we have failed as an Internet if we don’t find a way to capture the binary that is Pittsburgh play-by-play man Paul Steigerwald and Bruins voice Jack Edwards describing the same play. I can just imagine it now …

Steigerwald: “… and you think about all those KIDS in the STANDS, gettin’ to choose between GENO and SID to do all their SCHOOL PROJECTS on, and you just gotta SMILE for the youth of our city! Either way, it’s SUREFIRE STRAIGHT A’s! And — my GOD — an absolutely disgraceful CHOP to Kris Letang’s BRAIN STEM, and the STAR DEFENSEMAN is down. Someone better tell BRAD MARCHAND that this isn’t some BAR FIGHT in GOOD WILL HUNTING!”

Edwards: “… which, by the way, is the other other thing I always loved about Jack Parker, Brick, and I mean, when you spend that much time dealing with 17-year-olds, and as a former 17-year-old myself I’m qualified to say this — and Kris Letang loses the puck to a buzzing Brad Marchand, and, ha! Looks like Letang is practicing his inverse tuck for Rio 2016 right there — call him Kris Louganis, as he clearly couldn’t handle Marchand being a burr under his saddle and decided to make a whole scene out of it! It’s no surprise Letang’s from Montreal, Brick! After seeing how the Canadiens came in here the other night, you almost start to wonder what it is they’ve got in the water up there! Maybe one of them will dive in and tell us!”

Two midseason contenders for the Jack Adams Award will be behind the benches in this Canadian showdown. I would have looked so smart if I had only nominated the Senators as a potential Ewing Theory contender (particularly considering that the column came out just two days after Erik Karlsson went down for the season). Ottawa has remained buoyant despite being ravaged by injuries to Karlsson and others; in fact, Sports Club Stats estimates their odds of making the playoffs as better now than they were the night they lost their marquee defenseman. Head Mustache in Charge Paul MacLean, who was also one of the Jack Adams finalists last season, has quite possibly outdone himself this time.

Canadiens coach Michel Therrien was “brought … out of coaching exile” by Montreal, a team that he had coached and been fired by in the past, and so far this season, he’s assimilated quite nicely. The Habs hold a slim lead in the conference after finishing dead last in the East last season, and it’s not just Boston that’s nipping at their heels: It’s teams like Ottawa, too.

The Senators are in sixth place in the East, but a regulation win over Montreal would narrow the gap between the two teams to just five points. And if it’s not in regulation? Well, that means we might get the chance to see a Bourqueishly brazen shootout attempt like the one Ottawa’s Kaspars Daugavins tried against Boston on Monday night. In that case, just as with Bettman points, everyone’s a winner.

In a season in which we’re frequently reminded that every game could bring about an effective four-point swing, this home-and-home between two bitter intradivisional rivals is about as potentially disheveling to the standings as it gets. The Western Conference has been shaping up in some strange ways this year; with the exception of Chicago and Anaheim, things are a complete logjam. Vancouver and San Jose share the same bizarre 11-7-6 record and same unimpressive -1 goal differential; over the past 10 games they’ve had an almost identical set of results. Spooky! For the Sharks, that means that this week is vital: With a matchup against the St. Louis Blues on Tuesday (another team tied with 28 points) and two tilts against L.A. later in the week, there’s a lot of jockeying to be done. Of course, when you’re facing a streaking Jeff Carter, you never know who’s going to take whom for a ride.

Other big home-and-homes coming up this week: The Minnesota Wild try to fend off the Colorado Avalanche with a pair of games on Thursday and Saturday … free-falling New Jersey meets the drifting Philadelphia Flyers on Wednesday and Friday … Pittsburgh and Boston will meet again Sunday, though with a couple games apiece in the interim … and the increasingly out-of-contention Washington Capitals make what could be a last gasp when they play the Southeast Division–leading Carolina Hurricanes on Tuesday and Thursday. Never forget the good times, Alex Semin.