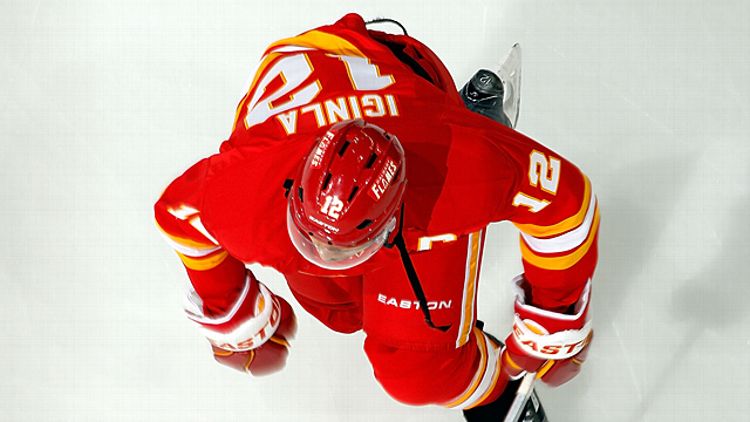 It’s not easy being Jarome Iginla.

At 35 years old, his best days are clearly behind him. The only NHL team he’s ever played for, the Calgary Flames, hasn’t made the playoffs since 2008–09 and isn’t likely to break that streak this year. His contract is up at the end of the season, unrestricted free agency beckons, and the experts all seem to agree that it’s time for the Flames to finally trade him before next week’s deadline.

But should he go? And if so, where? Iginla has a no-trade clause and could veto any deal. Does he want to uproot his family just to be some team’s short-term rental? How would that affect his legacy in Calgary? What kind of message is he sending to his fans if he leaves? Then again, with the Flames going nowhere and only a few chances left to win his first Stanley Cup, what kind of message is he sending if he stays?

Luckily, Iginla isn’t the first player to be in this situation. NHL history is filled with similar cases — star players, firmly identified with one team, who found themselves facing a possible move late in their career. And thanks to those players and the various choices they made, we have a pretty good idea about the different ways Iginla could go, and what those decisions would mean for him.

I’m here for you, Jarome. So I’ve put together a list of the possible ways that the last few years of your career could play out. Sit back, grab a coffee, review the options, and then choose the one that’s best for you.

Accept a trade, finally win the Stanley Cup that’s eluded you for your entire career, then retire

Also known as: “The Ray Bourque.”

The precedent: With Bourque nearing the end of his career and Boston going nowhere, the long-time Bruin requested a trade to a contender. He was moved to the Avalanche a week before the 2000 trade deadline for an underwhelming package of players and a first-round pick. Colorado lost in the conference finals that year, but Bourque stuck around for one last season in 2001 — and won his only Stanley Cup in the final game he ever played.

Pros: You win the Stanley Cup. Everyone in hockey abandons any pretense of objectivity and actively cheers for you for two straight months. Not only do your former team’s fans still love you when it’s all over, but you can bring the Stanley Cup back to town and 20,000 of them will show up to cheer you on.

Cons: None. Absolutely nobody ever has a bad word to say about this whole situation, making Ray Bourque the only player in sports history to ask for a trade and still be loved for it.

Unintended consequence: The clip of Joe Sakic turning and handing you the Stanley Cup in front of your sobbing son is about to make everyone who clicks on it cry a little.

Never get traded, play your entire career with one team, win multiple Stanley Cups and become a legend in that city

The precedent: It doesn’t happen often, but occasionally a player will spend his entire career with one team and help it contend right until the very end. No major controversy, no end-of-career trade rumors, just a string of uninterrupted excellence that ends with a classy and well-timed exit.

Pros: Number retirement, Hall of Fame induction, a statue in front of the arena, a generation of children named after you, a litter of adorable puppies trained to sprinkle rose petals in front of your feet as you walk the city streets.

Cons: As far as Iginla goes, it would require a time machine. Next.

Unintended consequence: Everyone just kind of forgets about that time you signed a free-agent offer sheet with the Rangers.

Never get traded, play your entire career with one team, never win a Cup but become a legend in that city anyway

Also known as: “The Gilbert Perreault.”

And … also known as (starting next year): “The Daniel Alfredsson.”

The precedent: Perreault was the consensus no. 1 pick in the 1970 draft, and wound up with Buffalo, thanks to a giant roulette wheel (no, really). He’d go on to play 17 years for the Sabres, many of those on the famed French Connection line. He never won a Stanley Cup, but he retired as the franchise’s all-time leader in games, goals, assists, and points. More than 25 years later, nobody’s come close to breaking those records. He’s basically the model for sticking with your team even if it never wins.

Pros: You and your family get to put down permanent roots in one city.

Cons: That city is Buffalo.

Never get traded, play your entire career with one team, win multiple Stanley Cups and become a legend in that city, and then suddenly come back years later to play for their rival

Also known as: “The Guy Lafleur.”

The precedent: Lafleur played 14 seasons for the Canadiens before abruptly retiring in 1984, scoring 518 goals and ranking as the franchise’s all-time leader in points with 1,246. After the customary waiting period, he was inducted into the Hall of Fame in 1988. He then shocked the hockey world by announcing his intention to return to the league. He signed with the Rangers and played there for one year, before spending two seasons with the Habs’ hated rivals, the Quebec Nordiques.

Pros: When you come back to play your first game against your old team, you can light them up and get multiple ovations from the home fans.

Cons: In Iginla’s case, it would mean playing for the Oilers four or five years from now, and would he really want to play for a team that was still in the middle of a rebuild?

Unintended consequence: You’re so well-respected that nobody pulls you aside to talk about what’s happening with your hairline.

Refuse to waive your NTC, but eventually end up with another team anyway when your old one decides not to re-sign you

Also known as: “The Mike Modano.”

The precedent: After 20 years with the Stars franchise, Modano declined an opportunity to be traded to a contender at the 2010 trade deadline. But when he decided that he would return for a final season and the Stars had no interest, he ended up playing his last year as a member of the Detroit Red Wings.

Pros: You get to end your career on your own terms and take one last run at a Stanley Cup, and the fans in your old city don’t hold it against you.

Cons: You immediately fill the void left by the departed Chris Chelios among people who made “Man, those Red Wings are super old!” jokes.

Unintended consequence: Everyone in the hockey world will eventually agree to just pretend the whole thing never happened.

Refuse to waive your NTC, but eventually end up with another team even though your old team does still want to sign you, or maybe not, we’re not actually sure

Also known as: “The Mats Sundin.”

The precedent: After 14 years in Toronto, Sundin famously refused to waive his no-trade clause at the 2008 deadline, even though the Leafs were desperate to start a rebuild. He claimed he wanted to retire as a Maple Leaf and didn’t want to win the Cup for a team unless he had been there “from October through June.” He then became a free agent (either because the Leafs didn’t really want him back or because he was upset at how the trade deadline was handled and wanted out, depending on who you believe) and finally signed with the Canucks in December.

Pros: You start a much-needed discussion about the true meaning of loyalty in professional sports, which is interesting for two weeks and lasts for three years. Despite some bad feelings, all is eventually forgiven.

Unintended consequence: Some unknown loser with a weeks-old blog starts writing snarky posts about you in a sad attempt to make some sort of name for himself.

Also known as: “The Miikka Kiprusoff.”

Pros: You would be placing the importance of being with your family, including your newborn son, ahead of playing a game.

Cons: According to hockey fans, that’s a total jerk move.

Accept a trade, go on to play short stints for a few more teams, and play pretty well

Also known as: “The Brian Leetch.”

The precedent: Leetch was in his 17th season with the Rangers when he was dealt to the Leafs at the 2004 deadline for picks and prospects. He put up 15 points in 15 games to close the season, but the Leafs lost in the second round. He returned after the lockout to sign with the Bruins, and played reasonably well for one year before finally retiring.

Pros: Your old team gets some much-needed rebuilding pieces, you show you still have something left in the tank, and your fans still respect you when it’s all over.

Cons: You don’t win another Cup, so hopefully you remembered to already win one 10 years earlier. Sorry, Jarome.

Unintended consequence: Decades from now, you can tell your great-grandkids cool stories about being part of the most recent Leafs team to make the playoffs.

Accept a trade, go on to play short stints for a few more teams, and play not-quite-so-well

Also known as: “The Peter Bondra.”

The precedent: Bondra was in his 14th season with the Capitals when they moved him to Ottawa at the 2004 deadline for a package that included a young Brooks Laich. It didn’t really work out. Bondra was held pointless in the Sens’ seven-game, first-round loss to the Leafs, and then went on to play forgettable post-lockout seasons for both Atlanta and Chicago.

Pros: You can hang around long enough to reach a key milestone that absolutely nobody will remember.

Cons: The sight of you wearing a Thrashers jersey has a kind of “Jerry Rice on the Seahawks” feel to it.

Unintended consequence: You leave Washington just before the start of the Alexander Ovechkin era, so none of their current fans know who you are.

Accept a trade, play for one more team (badly), but land your old team a future hall-of-famer

Also known as: “The Bernie Federko.”

The precedent: As we already covered earlier this week, Federko had a hall-of-fame career (kind of) for 13 years in St. Louis before being traded to the Red Wings in a deal for Adam Oates and Paul MacLean. He played one sub-par year in Detroit and then retired.

Pros: To this day, fans of your original team run up to you in the streets to hug you and say thanks.

Cons: When they’re done thanking you for the Adam Oates trade and you add, “Yes, but I also played here for 13 years,” they just kind of awkwardly stare at you.

Unintended consequence: For reasons nobody is quite clear on, everyone who gets traded for you apparently has to become a coach for a national-capital-based NHL team.

Refuse to be traded, give an inspiring speech about believing in your teammates even if nobody else does, then shock the world by leading your team to a stunning championship

The precedent: None. Sorry.

Pros: Would be, without question, the best possible ending for the Jarome Iginla story.

Cons: You know this can’t happen, because you are not 5 years old.

Unintended consequence: Disney makes a movie about the story, Will Smith plays you, and the soundtrack features the hit single “Getting Iggy With It.”