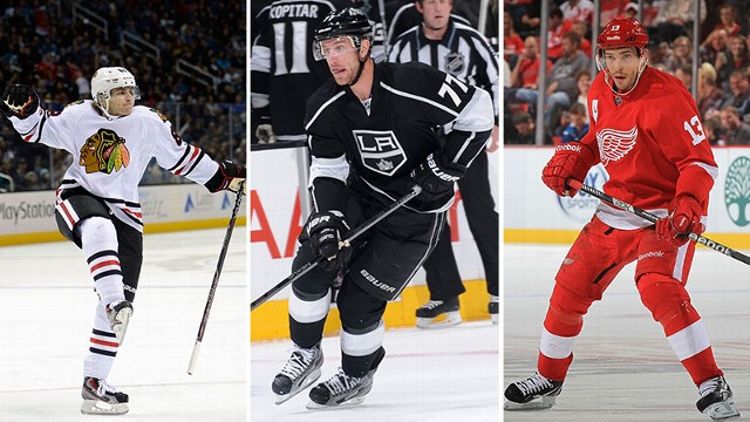 In the next few hours, a winning-goal scorer will think briefly about his accomplishment, and he will shrug and toothlessly smile. “Hey, that’s playoff hockey,” he will say, as if that explains it. In another room not far away, a heavy and defeated defenseman will shake his head, trying to find an answer for what went wrong. “We can’t be making these mistakes,” he will say. “This is playoff hockey.”

The concept of playoff hockey is like the notion of wellness: It’s an ideal, an asymptote, something to strive for and live by but not something that can be explained other than to crane your neck and give a head nod when a living example walks by. When it comes to wellness, routine begets stability and control. In playoff hockey, familiarity breeds sweet, sweet contempt.

And coming off a lockout-shortened season, this particular edition of playoff hockey ought to be as insane as ever. We’ll be previewing the postseason series that begin this week. Here’s a look at the three games making up the playoffs’ opening schedule tonight.

The Backstory: In a sense, Minnesota has already begun its postseason: After some late-season missteps, the Wild faced a series of must-win games just to make it into the playoffs. (You wonder what the bigger motivating factor was: playing a few more games, or the sheer terror of what their rampaging owner was planning to do to them.)

As a reward, they earned a date with the Presidents’ Trophy–winning Chicago Blackhawks, who all season have generally been as businesslike and methodical as their captain Jonathan Toews is in one of his standard postgame interviews. (On the ice, at least.) The Blackhawks have big and mobile defensemen, a quick offense, and a controlling possession game. They finished this season with a plus-53 goal differential. The Wild? Minus-five.

The Big Questions: Can Minnesota Wild coach Mike Yeo succeed in bending time and space in order to put Ryan Suter on the ice for even more than the 32:54 he played in the team’s final regular-season game? How mercifully will the Blackhawks toy with their new little pet Minnesota? How long will Ray Emery be out? If Chicago is surprised early on by the Wild, how will it respond?

Any Bad Blood? Everybody laughed when NBC Sports ran a Blackhawks-Wild game as part of its “Wednesday Night Rivalry” series, and an attempt by the Wild’s team website to stir up some animosity back in January centered on the fact that four of their five previous matchups had ended in shootouts. When you find yourself reaching back to the North Stars, it’s a sign that this pairing could use some work.

Fun Fact: The best way to understand the relationship between Toews and Patrick Kane is to hear Toews tell it in his own words.

Bold Prediction: The Minnesota Wild will find a way to win a game even if Zach Parise has to personally orchestrate a Happy Gilmore–style novelty multi-bank shot goal to make it happen. But unless Chicago’s goaltending has a complete meltdown in the postseason, I don’t see the Wild getting more than one against such a well-oiled machine, especially with Dany Heatley out for the season and Jason Pominville recovering from injury. Chicago wins in five.

Representative Song: “Walk On,” by U2. What Chicago’s got Minnesota can’t steal it, no they can’t even feel it.

The Backstory: The Anaheim Ducks finished the year with 66 points, behind only the Blackhawks and Pittsburgh Penguins. And yet they never garnered much attention for what was a marked turnaround in coach Bruce Boudreau’s first full — well, not quite full — season. It wasn’t just the usual East Coast bias that kept Anaheim relatively low-profile, nor was it because they were living in the shadow of the L.A. Kings. Many of the most attuned observers of the Ducks’ successful season have been those wondering whether or when it might all collapse.

The Red Wings enter the playoffs having already faced elimination over the last few weeks; it wasn’t until this past Saturday that they played their way into the postseason by winning their fourth straight game. (It’s their 22nd-consecutive bid for the Cup: There are officially kids of legal drinking age out there who have never cracked bitter golf-course related jokes or bothered to brush up on draft projections.)

The Big Questions: The Ducks split time between two goaltenders, Viktor Fasth (who will be appearing in his first NHL playoff games) and Jonas Hiller (who has playoff experience, not all of it appealing), but don’t have a clear no. 1 heading into the postseason. Will this arrangement help give them depth in net or become a distraction? Will Ducks defensive pair Sheldon Souray and Francois Beauchemin be able to maintain play that is probably unsustainable? Can Boudreau shed his “can’t win in the playoffs” label? Does Detroit’s blue line have enough depth to stop an Anaheim offense that includes Ryan Getzlaf, Corey Perry, Bobby Ryan, and Teemu Selanne?

Any Bad Blood? Mostly just bad memories. There were undoubtedly many Ducks fans groaning in disbelief when they found out their division title had earned them a date with the Red Wings in the first round. The two teams have met five times in the postseason and have fought to a 3-2 Detroit series record. But Red Wings fans also have reason to be nervous. The Ducks have in the past been able to rattle even Pavel Datsyuk, who fought Perry to much surprise back in 2010 and tangled with Scott Neidermayer in 2009. (He wasn’t part of the mass fisticuffs that went down a month ago, though.)

Fun Fact: Earlier this season, Detroit coach Mike Babcock tried to pep up slumping Swiss recruit Damien Brunner with some interteam inspiration. “[Selanne’s] pretty special,” he told Helene St. James of Anaheim’s 42-year-old Finn. “I just saw he scored his 107th game winner. That’s not bad. I actually gave the article to Brunner, because he just hasn’t scored in 10 games. It just goes to show you that you do score again if you just keep doing good things.”

Bold Prediction: I’m torn on this one. All season, the Ducks have been poised for regression, but all season, they’ve continued to put up silly numbers and their run may well continue — particularly considering the strength of their personnel. The Red Wings are their usual selves: hard-working, systematic, diligent, if a bit ravaged and thinned out by age. This is basically a question of whether a volatile, overperforming hedge fund can eke out the quarter in better shape than a dutiful blue-chip portfolio, or whether it’ll crash on the second-to-last day and lose all of its gains. You know what? I’m going with the Ducks, and I’m paying for it in Bitcoin. Anaheim wins in six.

The Backstory: After the smashing success of last season’s initially unassuming L.A. Kings, everyone wants to know which team will be this year’s iteration. The answer might be Los Angeles once again. As they did last season, the Kings have some of the best underlying possession numbers in the league, but not a Chicago-like record to go along with it. While the team struggled to get the puck in the net last season, this year it’s had a hard time keeping it out. Goalie Jonathan Quick, who had back surgery in the offseason, didn’t get off to a good start this season. But there are signs that he’s returning to more dependable form.

The St. Louis Blues faced a similar situation in net this year, as the goaltending they relied upon last season (a tandem effort between Brian Elliott and Jaroslav Halak) failed to repeat its 2011-12 performance. Rookie Jake Allen helped keep the team afloat despite an offense that sits in the bottom half in league scoring. Entering the playoffs, it’s the team’s deep post–trade deadline defense that makes them a threat.

The Big Questions: Can Quick regain his top form? What about streaky Elliott on the Blues’ end? Will T.J. Oshie, who is returning to the Blues lineup after being out since late March, be able to provide scoring for St. Louis? Will the Kings maintain the monster possession numbers that have gotten them this far? How many goals will Jeff Carter score?

Any Bad Blood? Between last year’s playoffs and this upcoming series, we could be on our way to developing quite a rivalry. Last season, a Dwight King hit on Alex Pietrangelo sidelined the young defenseman for a game; King was not assessed any supplemental discipline. A physical game earlier this season culminated with Kyle Clifford destroying Roman Polak. Both teams have big captains unafraid to deliver shots of tenuous legality. Things could get interesting.

Fun Fact: After being traded to St. Louis from the Calgary Flames, Jay Bouwmeester will break his unsavory streak of being the active NHLer with the most games played (762) without a postseason appearance. Asked about the playoffs, Bouwmeester said: “It’s good, I guess. It will be fun to play the games.” Catch the excitement!

Bold Prediction: The Kings are returning an almost identical roster to the one that took home the Cup, and they’ve been playing commanding hockey all season long. If Quick elevates his game even slightly, it will probably be enough to get by the Blues. But St. Louis won’t be swept the way they were last season. Los Angeles in six.

Representative Song: “Hold On,” by Tom Waits, because the song references both “that California trip” and says that “St. Louis got the best of me,” and because holding on is what both teams are hoping their once-great, now-unpredictable goaltending can do.

“Well, you build it up, you wreck it down / you burn your mansion to the ground / When there’s nothing left to keep you here, when / you’re falling behind in this / big blue world / Oh you got to / Hold on, hold on.”

That’s the playoffs for you, right?

Who's That Guy? Quincy Pondexter!