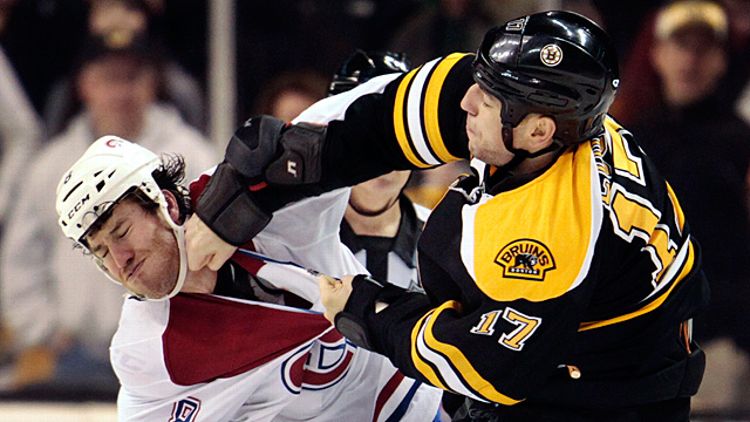 Every team in the NHL has played at least 24 games. That means it’s time for a random collection of observations from the season’s first half, loosely held together by a common structure of … oh, I don’t know, let’s go with “threes.” Everyone good with threes? Cool, threes it is.

Three teams that have been unexpectedly good

Anaheim Ducks
The Ducks were supposed to be rebuilding after missing the playoffs by a mile last year. Instead, they’ve solidly established themselves as the West’s second-best team. It might not last (and if you’re into advanced stats, you’re convinced it won’t last), but Ducks fans are enjoying the ride. Things are going so well that the Ducks even got half of their soon-to-be UFA duo re-signed — Ryan Getzlaf down, Corey Perry still to go.

Montreal Canadiens
Call them the Anaheim Ducks of the East! (No, really, call them that; it will drive their fans insane.) The Habs have gone from 28th overall to the top of the Eastern Conference under newish coach Michel Therrien. Granted, it would be easier to get excited about them if the Bruins didn’t have roughly 19 games in hand — seriously, NHL schedule-maker, anytime you want to start giving Boston a game or two, it would be just fine with the rest of us — but they’re all but locked into a playoff spot that few predicted.

Chicago Blackhawks
OK, fine, I wanted to keep Chicago off this list but I just can’t. Sure, the Blackhawks were always expected to be contenders. But nobody thought they’d be this good — because nobody thought anyone could be this good. It’s ridiculous to think we’re more than halfway through the season and they still haven’t lost in regulation. (Note to self: Before handing this in, maybe double-check that their streak hasn’t ended. On second thought, forget it; what are they going to do, lose to Colorado and Edmonton?)

Three teams that have been unexpectedly bad

Washington Capitals
Washington has spent most of the year languishing in the bottom five of the league standings with the various other also-rans. But none of those teams have close to the Capitals’ talent on paper. I’ve written plenty about this team during the past month, and I’m running out of new ways to describe how bad its season has been, so let’s try to come up with a term that everyone can agree is synonymous with “utter train wreck.” Hmm. Is “Philadelphia Flyers” taken?

Philadelphia Flyers
Crap, I guess it is. The Flyers are ahead of the Capitals in the standings, but that’s about where the good news ends. A demoralizing loss to the Penguins last week has some wondering whether coach Peter Laviolette is on the hot seat. This is a team that was built to win a championship, and right now, it looks like the only way anyone in the Flyers’ dressing room is hoisting the Cup this year is the old-fashioned way — by getting traded to the Kings.

Edmonton Oilers
The Oilers were the league’s wild card heading into the season. Some were expecting another lottery finish. Some had them as the best team in the West. But if we could agree on anything, it was that at least they’d be exciting. The defense and goaltending looked spotty, but the cast of young stud forwards had just spent half a season rolling through the AHL and were supposed to be ready to explode. Instead, the big names have been merely OK. And most nights, the Oilers aren’t just bad — they’re boring.

Fighting is up
Not only has there been more fighting, but heavyweights are in demand, with teams like Calgary, Edmonton, and Ottawa each acquiring one in recent weeks. More fighting has even been credited as the reason for the Maple Leafs’ unexpected success. It’s not — Toronto’s record is mostly due to strong goaltending and good luck — but there’s no reason to let facts get in the way of a good narrative.

Suspensions are down
There have been eight player suspensions so far, none of more than five games. That includes what was supposed to be an automatic 10-game ban of Ryane Clowe that was reduced to just two. That’s not necessarily a good thing, if you believe that stiffer sentences would lead to a safer game, but so far, Brendan Shanahan has seemed willing to give players the benefit of the doubt. As of Tuesday night, Corey Perry is hoping this trend continues.

Canada looks good
Four Canadian teams are sitting in playoff spots at the midway mark, and Winnipeg is tied for a final spot. Once Alberta finally gets around to separating, the country will be all set.

Chris Kunitz
He’s been putting up excellent numbers all year long, but it was a five-point explosion against the Islanders on Sunday that officially moved him to “Wait, he has how many points?” status. By racking up offensive numbers while playing on Sidney Crosby’s wing, he’s basically assumed the title of this year’s James Neal (narrowly beating out the runner-up, James Neal). The guy who drafted him in the late rounds of your pool is insufferable right now.

Viktor Fasth
Fasth was supposed to be an afterthought as Jonas Hiller’s backup. Instead, he’s split time with Hiller, put up top-five numbers in save percentage and GAA, and earned a surprising contract extension. Not bad for a 30-year-old rookie.

Nazem Kadri
When the moment your GM decides to draft you becomes a viral video sensation before you’ve even arrived at training camp, you know you’re in the spotlight. For the first three years of his pro career, Kadri looked like a potential bust — he couldn’t stick at the NHL level, and his coaches seemed to delight in pointing out his every flaw. But this year, something’s clicked. Imagine what could happen if he ever gets off the third line.

Three players from bad teams who still deserve some love

Steven Stamkos
Ho-hum, just another season leading the league in goals for Stamkos, who already has two Rocket Richard trophies in his pocket. Well, probably not in his actual pocket, since that would be uncomfortable. Although come to think of it, it might be the only way to make things fair for everyone else.

John Tavares
The Islanders have made it out of the first round of the playoffs just once in John Tavares’s lifetime. He was 2 years old. You could forgive him if he spent all his time sitting in a dark room sobbing, but instead, he’s well on his way to yet another career year.

Thomas Vanek
If you pay any attention to the NHL, then Thomas Vanek needs no introduction. That’ll come in handy for him next year in Buffalo, when he’s the only person in the organization who hasn’t been run out of town after this disaster of a season.

What happened to the Blues’ goaltending?
Last year, the Blues posted the best team save percentage in the NHL. So far this year, they’ve posted the worst. They have the same two goalies and both are healthy, and the Blues still allow fewer shots than any team in the league, so it’s not like the team has forgotten how to play defense. Their goalies are just bad now. OK, maybe Brian Elliott falling back to the pack was predictable, but Jaroslav Halak hasn’t been much better. If the Blues can’t get this sorted out quickly, everyone’s trendy Stanley Cup pick heading into this year is going to be playoff cannon fodder — if they make it that far.

How are the Ottawa Senators still hanging around?
The Senators’ injury woes have been well-documented. (Literally, they have been. We all get it, Ottawa media.) But despite having their two best players go down with what are likely season-ending injuries early on, the Senators are still solidly in playoff contention. One explanation is goaltending — it’s been very good, even though Craig Anderson got hurt, too. But maybe a better one is that Paul MacLean might be the best coach in the entire league right now.

Why aren’t the Rangers any good?
If I’d told you at the beginning of the year that the Rangers would be struggling to make the playoffs, you’d probably assume that either (a) they had injury problems, (b) Rick Nash was a bust, or (c) Henrik Lundqvist had an off year. But they’ve been relatively healthy, Nash has been great, and Lundqvist has been fine. That should add up to a strong team, but it’s not happening, largely because most of the forwards who aren’t Rick Nash have been underwhelming. Is it time for John Tortorella to go? Next question, moron.

Three questions we already know the answer to

Is Sidney Crosby healthy?
Yes. And he’s also way, way better at playing hockey than just about anybody on the planet.

Are the Florida Panthers for real?
No. Although if you were paying attention last year (when they racked up the loser points on their way to narrowly winning a weak division), you already knew that.

Is this the year that perpetually going for it finally pays off for the Flames?
Wait, I’m sorry, this was supposed to go in the section titled “Three questions we all knew the answer to three years ago.”