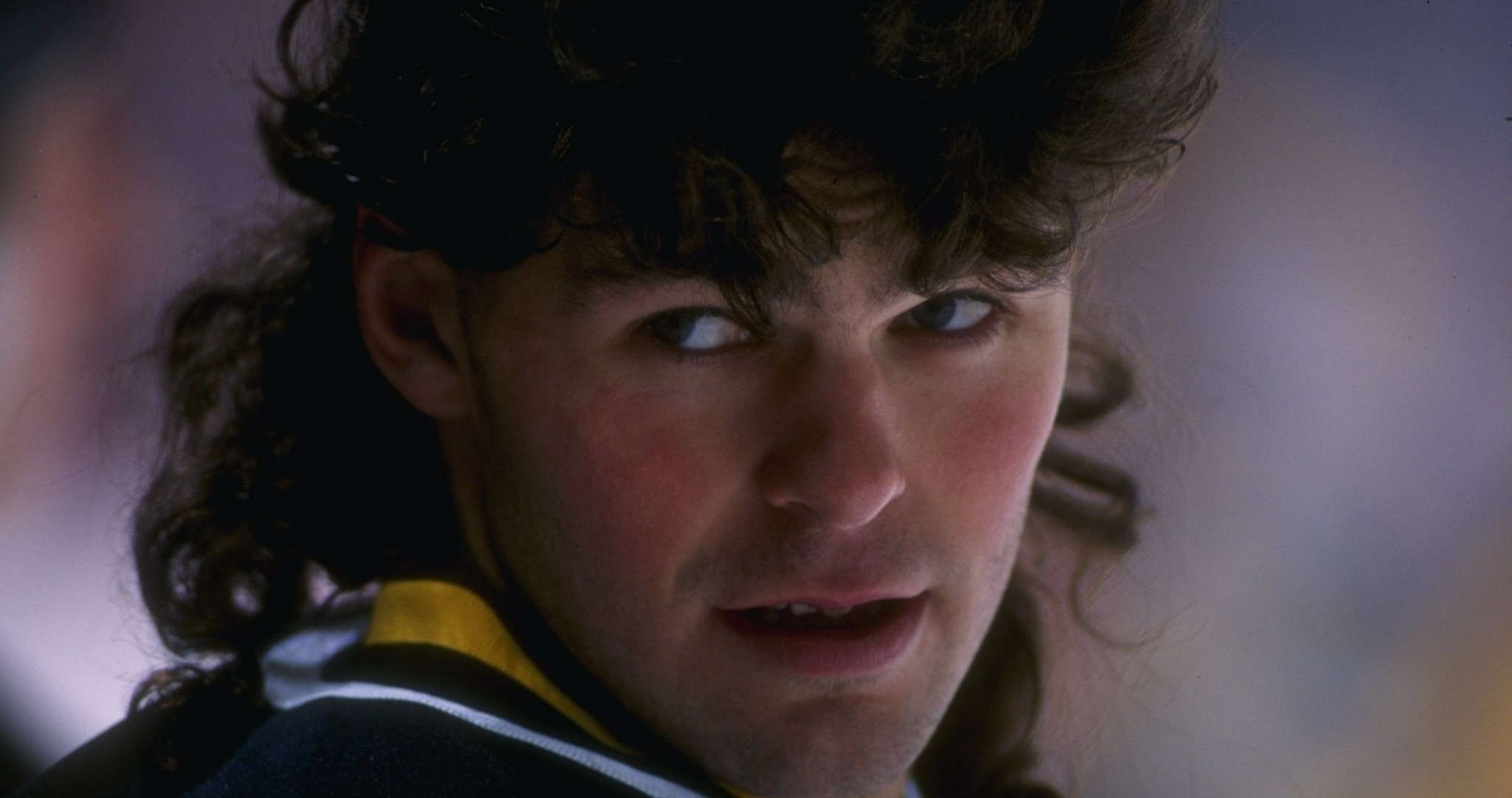 Normally this is the section where we recognize the funniest things that have happened in the past week. But since we haven’t done one of these since June, we’re going to go off script with a look back at everything we missed over the offseason.

I love this guy.

Media: “How is riding the elevator with fans?” @PKessel81: “It has its ups and downs.” pic.twitter.com/jKsnKZNix4

Elevator humor. It’s funny on so many levels.

The second star: Taylor Hall attempts to eat a banana

All told, it was a great offseason for Oilers winger Taylor Hall. His team won the draft lottery, hired a new coach and GM, and added a new starting goaltender and top-pairing defenseman. He even got in a pretty decent tweet about it. Look at him, showing an actual personality!

Also, he ate a banana for the first time.

True story: I had my first ever banana today.

Yeah, I’m not sure what to make of that, either. Even better, according to this screen grab that I cannot verify but am irresponsibly running with anyway, he actually struggled with the concept.

Is being confused by a banana worse than the time Hall repeatedly failed an open-book boating license test? It’s worse, right? OK, just wanted to make sure.

The first star: Roberto Luongo, Jaromir Jagr, and the Mullet

Jagr’s continuing quest to play for every NHL team before he retires in 2027 has taken him to Florida, where he’s teammates with Luongo. As you’d expect, that has opened up some comedy opportunities for the good-natured goalie.

I will make it my mission this year, work 24h around the clock 2 get Jags to bring this puppy back! It’s gonna happen pic.twitter.com/NcAiEzmtmU

All of which was well and good. Luongo’s a funny guy,1 and we all had a laugh.

He’s doing it! It’s coming back! The mullet is making a return! I am overusing exclamation points!

Roberto Luongo needs to win the Vezina for this alone.

This week’s obscure player of the week is Zellio Toppazzini, because, man, is that name ever fun to say.

Toppazzini was a winger who broke into the NHL as a teenager with the 1948-49 Bruins before being traded to the Rangers early in the 1950-51 season. That ended up being a 14-goal season, the best year of his NHL career. He was back in the minors by 1952, where he’d end up having a very good 12-year AHL career with the Providence Reds (and a brief trip back to the NHL with the Blackhawks in 1956-57). He retired in 1964 and began a coaching career at Providence College.

In addition to his cool name, Toppazzini has a pair of interesting connections to some NHL newsmakers from this past offseason. The first: While he never made it into an NHL Game 7, success in deciding games did run in the family. Toppazzini is the great-uncle of Mr. Game 7, Capitals free-agent addition Justin Williams.

And as for that coaching job at Providence College, it lasted until 1968, when he was replaced by his 25-year-old assistant. That fresh-faced young whippersnapper would go on to become the school’s athletic director, a position he held until 1987, when he headed to the NHL to join the Devils. Unlike Toppazzini’s, it’s fair to say that Lou Lamoriello’s NHL career went on to be a long one.

“Be it resolved” is a feature in which we’ll propose new NHL rules and customs that the rest of the hockey world will be expected to immediately adopt as official policy.

The PIM stat is a weird one. It measures how many penalty minutes a player or team earns, which in theory would be a bad thing to have a lot of. But over the years, it instead became a proxy for overall toughness. If a player has a lot of PIM, he must be a tough guy. If a team has a lot, it’s full of bruisers. And if a game ends up with a high total, it must have been a barn burner.

Here’s how penalty minutes work in the NHL:

• Standard hooks, slashes, trips, and elbows, along with the occasional gloved punch: Two

• Repeatedly punch an opponent in the face and/or blatantly attempt to injure him: Five

• Get snippy with a referee: Ten

Wait, what? How can dropping a frustrated F-bomb at a ref be worth twice as many PIMs as bare-knuckled combat? There’s nothing tough about getting a misconduct. I could get a misconduct in an NHL game, and I can barely skate.

Misconducts are screwing up the stats of individual players. More importantly, they’re messing with history. The Senators and Flyers hold the all-time record for most PIMs in one game, with 419. Sounds crazy, right? But look at the box score. It’s a few fights, then an avalanche of misconducts2 because the officials went into panic mode.

And yes, I’ve complained about this before. But now we can fix it. The NHL has gone all in on enhanced stats, working away to digitize every game ever played. Good. Once that’s done, the first order of business is that we strip out all the misconducts from PIM totals. Then they’ll really tell us something about toughness.

Be it resolved that misconducts don’t count in PIM records anymore. All in favor? Motion carried.

You’d think Don Cherry would take the summer off. The man is 81 years old, and he works his tail off all hockey season. If he wanted to head for the cottage in July with a few wobbly pops and check out entirely for a few months, you’d understand it.

Instead, Cherry spent the summer becoming Canada’s most popular baseball commentator. He threw out the first pitch at a Blue Jays game. He lobbied for Josh Donaldson to make the All-Star team. He apparently retroactively drafted Jose Bautista. He went all Stats Nerd on us, citing WAR while talking about the MVP race. He defended Jonathan Papelbon. In essence, Cherry has now become the second person to become a baseball analyst in Canada while looking, dressing, and sounding like Don Cherry, following Gregg Zaun.3

And he did it while reminding you that Don Cherry works harder on vacation than you do at your job. I can’t wait for the Blue Jays’ playoff run (well, they lost Game 1), as Cherry hijacks Coach’s Corner to give a seven-minute sermon on when it’s appropriate to hit-and-run while wearing a suit made out of actual blue jay feathers.

It’s opening week around the league, which means every team will feel obligated to trot out an elaborate pregame ceremony in an effort to pump up fans who just want to see them drop the puck. NHL teams are almost uniformly terrible at this4 and always have been. So today, let’s travel back to 1992 to watch one fledgling team take the ice for the very first time and put on quite the … show?

• This is from October 8, 1992, as the Senators prepare to host their first ever regular-season game. It’s coming to you from the lovely Ottawa Civic Centre (now the TD Place Arena), the building that answered the question “What if we wedged a hockey arena under a football stadium and just forgot to put any seats on one side?”

• We join our P.A. announcer mid-sentence in what sounds like a promise that the Senators hockey club will reflect historical Roman senators. He then adds, “As long as you think Roman senators are the same thing as Roman centurions, because that’s all you’re going to see for the next 24 years.”

• “It’s showtime!” he shouts enthusiastically. “No, it’s not,” reply people who have already seen the rest of this video.

• As a horn solo begins, we get a close-up of a Roman senator centurion, who is playing along on a … curtain rod? Um, that’s not how music works, guys. You can’t just blow onto random things and pretend they make trumpet sounds.

• Curtain rod man, who I’m just going to go ahead and call “Rod,” is soon joined by an entire brass section and/or one dude on a synthesizer. That’s followed by the opening notes of the Senators’ theme song (one they still use today), and the first of many smatterings of applause from a confused crowd that’s not sure when it’s supposed to cheer.

• I thoroughly enjoy the way the song pauses at 2:20, just long enough to get a “thank the lord that’s over” cheer from the crowd before immediately starting up again.

• Next up is a group of figure skaters wielding shields, presumably to hold up over their faces if the camera tries for a close-up. That one guy at 3:07 sure seems thrilled with his lot in life as he gets ready to execute his daring single salchow.

• Is this a good time to admit that I really like this song? I can’t help it. I’ve heard it about 300 times in my life, and it never disappoints. It’s going to be stuck in your head for the rest of your day, and I don’t apologize for that.

• Four skaters assemble at center ice and stare out into the crowd intently, which can mean only one thing: It’s time for them to teach us the intricately choreographed “Let’s Go Senators” cheer. And it’s … two claps and a fist pump. Huh. Pretty complicated stuff there, Sens. You sure you don’t want us to blow on a curtain rod while we’re at it?

• We close with a four-person spin that … wait a second, I’ve seen this before. One arm holding on to someone, one fist cocked in the air, tucked in a half-crouch, spinning around in ever-faster circles … yes, it’s Every Tie Domi Fight Ever! He stole that move from the Ottawa Senators’ pregame show. I wonder if he ever bothered to thank them.

• Everyone forms into an awkward reverse conga line, at which point our clip ends, presumably because this guy’s VCR became sentient enough to reach over and unplug itself from the wall before it had to endure any more of this.

The Senators went on to finish the season with a 10-70-4 record, including a record-breaking 1-41-0 on the road. Until about 1997, these pregame show dancers remained the only people ever seen in Ottawa wearing Senators uniforms who could actually skate.