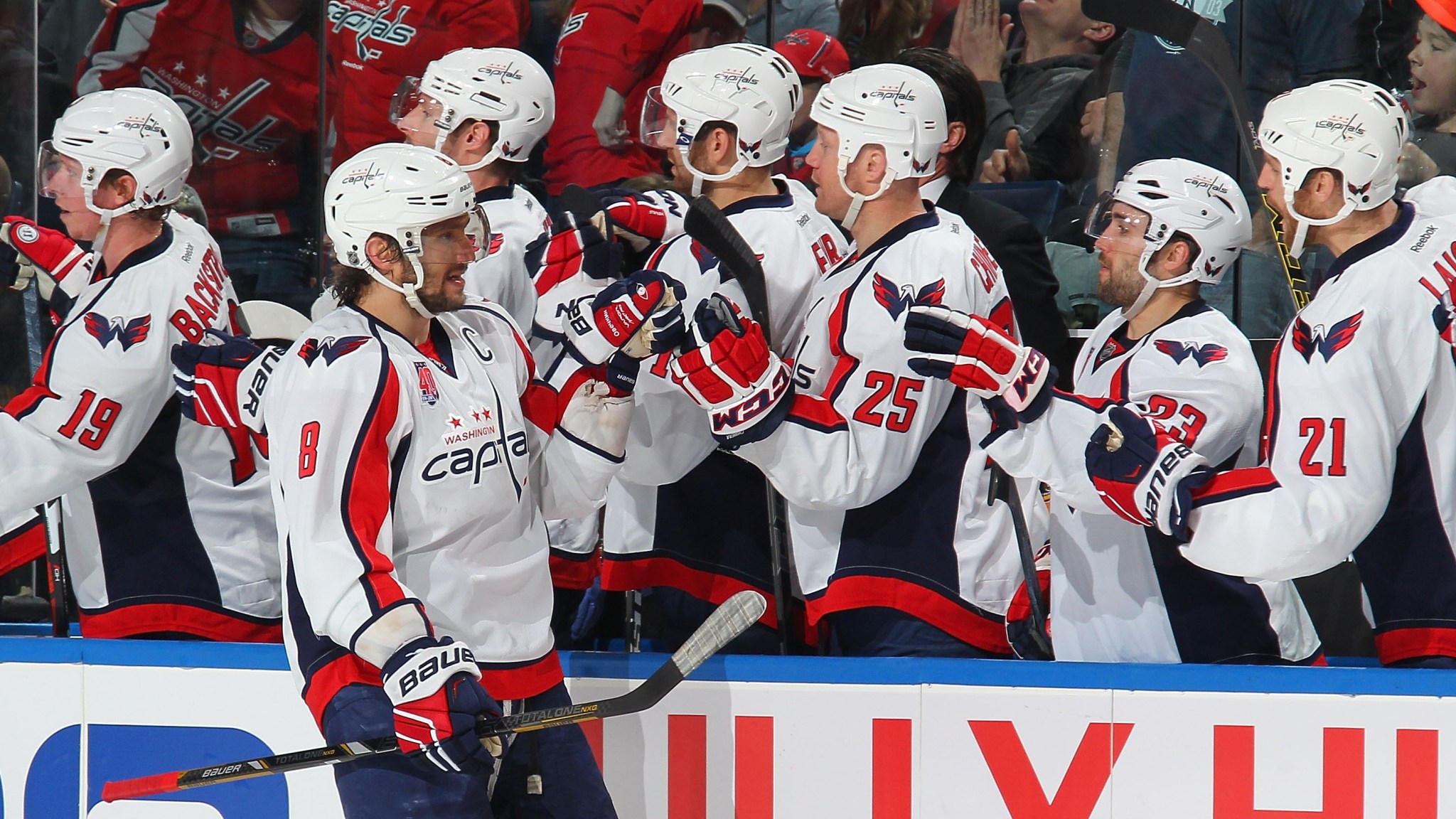 The NHL’s reigning king of the butt-related goal gets another, this time with an ill-advised clearing attempt aimed right at Brandon Sutter’s behind.

The second star: Whatever the hell these things are

Twitter user @Gerv_Rebrand keeps making mashups of NHL faces, and he needs to be stopped. Pierre McCrosby was bad. Eugene Alfredsson was worse. But this … this is unforgivable:

He showed up at an AHL game, and it did not go well. On the bright side, I think I figured out who’s starting in net for the Sabres the rest of the way.

Just another day in the A… pic.twitter.com/16iI4RGoEl

Earlier this week we looked at the few times in NHL history that the no. 1 draft pick was traded. The strangest of those was the 1976 deal between the Habs and Rockies, in which Montreal sent two players to Colorado for nothing more than the right to swap first-round picks a full four years in the future. That 1980 pick ended up being the first overall; the Habs famously used it to pass on Denis Savard and take Doug Wickenheiser.

It’s one of the weirder trades in NHL history. So for this week’s obscure player, let’s look at one of the guys the Rockies acquired in the deal: forward Ron Andruff.

Andruff was a decent enough prospect who was drafted twice in 1973, by Winnipeg in the first round of the WHA draft, and by Montreal in the second round of the NHL version. He chose to sign with Montreal and had a successful minor league career that included winning the AHL’s MVP in 1976. But he couldn’t crack the roster of the stacked Canadiens, who were in the middle of a Stanley Cup dynasty. That’s when the deal with the Rockies went down, and Andruff had a few semi-productive seasons in Colorado. But he was out of the NHL by 1979, having played just 153 career games and scoring just 19 goals. He went to Europe for a few years, then retired.

That was it for Andruff’s hockey career. But here’s an odd twist: If you’re a fan of professional sports, you still get to enjoy his work to this day, even if you never realized it. According to Wikipedia, Andruff went on to found a company that invented those rotating advertisements that have become common at fields, courts and rinks around the world.

This week’s debate: With the playoff picture coming into focus, it’s time for our annual round of “Do you actually know how the wild card works?”

In favor: What? Yes, of course. All fans do. It’s a wild card. How screwed up could it be?

Opposed: This is the NHL, so I’m assuming that question is rhetorical.

In favor: Yeah, but this is as basic as it gets. Three teams from each of the four divisions get in. That leaves four wild cards, two for each conference, and those can come from any division.

Opposed: So far, so good.

In favor: Told you it was easy.

Opposed: And once the wild cards are settled, how do the matchups work?

In favor: Well, the seedings are based on divisions. Usually, four teams from each division will make it, and that’s easy – 1 plays 4, and 2 plays 3. But if five teams from a division get in, one has to cross over. That’s what happened last year, when the Central Division Stars had to play the Pacific Division Ducks.

In favor: But still, pretty simple.

In favor: Wait, is that not how it works?

Opposed: Let’s try a hypothetical. Right now, the Eastern wild cards are the Capitals followed by the Senators. Let’s say it stays that way and the Rangers finish first in the conference. Who would they play?

In favor: The Capitals, since they’re the wild card from the Metro.

In favor: Wait, what? There’d be one wild card from each division, so there’s no crossover.

Opposed: Oh, yes there would. The top seed always plays the second wild-card team. So if the scenario we just described played out, the Capitals and Senators would switch divisions. They’d both be crossover teams.

In favor: Huh? That can’t be right. It didn’t happen that way last year.

Opposed: Only because the standings didn’t work out that way. But this year, they could.

In favor: So the Capitals go to the Atlantic and the Senators are in the Metro? That makes no sense. I thought the league wanted division rivals to play each other in the playoffs.

Opposed: This is the system the league came up with. And remember, those crossovers are permanent — the teams stay in that division throughout the playoffs.

In favor: So if the Kings get the last wild card in the West, and the Blues are the top seed, that means …

Opposed: … the Kings become a Central team and play St. Louis in the first round. And if they win that series, they get either Chicago or Nashville in the second round.

In favor: And if they win that …

Opposed: Then the Los Angeles Kings are the 2014-15 Central Division champions.

In favor: They … could win a division … that they are not in.

In favor: I’m like 90 percent convinced you’re making this up, like the whole 5-year-old Jonathan Toews thing from a few weeks ago.

Opposed: That was a different section.

In favor: So you’re actually serious about this?

In favor: Why does nothing ever make sense in the NHL?

The final verdict: Let’s just all agree to cheer really, really hard for this not to happen.

Threepidation (noun) — The sense of trepidation, unique to hockey fans over the last 15 years, that sinks in upon realizing that the two teams your favorite team is battling for a playoff spot are playing each other, and that thanks to the stupid loser point it’s now a 100 percent certainty that it will end up being a three-point game.

This is WrestleMania weekend, and since everyone around here is a WWE fan, I figured I’d go with a wrestling-themed clip this week. Unfortunately, that’s easier said than done, because the NHL has been sadly lacking in pro wrestling moments. Oh, sure, Chris Jericho’s dad played for the Rangers, and there was that time Bret Hart used a Tie Domi jersey to KO Bill Goldberg. But where’s hockey’s Lawrence Taylor or Karl Malone, headlining pay-per-views? We just don’t have one.

Luckily, while the NHL rarely tries its hand at wrestling, the WWE did once try its hand at hockey. So for this week’s clip, let’s leave the rink and head for the squared circle, as we take a moment to appreciate a sports entertainment legend: the Goon.

• The Goon debuted sometime around the summer of 1996. He was played by “Wild” Bill Irwin, who’d enjoyed a reasonably successful career in the NWA and WCW, and so by law was forced to take on the worst gimmick possible when he arrived in the WWE.

• You’ve got to admit, they got the hockey hair down pat. In fact, there’s a ton of great stuff about this character, and we’re going to be pointing them out throughout this list.

• Awesome Goon Detail no. 1: He has “Goon” written on his back. That’s helpful. He’s the first hockey player to list his actual job description on his jersey since Dale Hunter.

• He’s a relatively new character at this point, so to establish his bad-guy credentials, we get a clip of him beating up a dude wearing Zubaz. Which, incidentally, was 100 percent legal in the mid-’90s.

• I’ll be honest, most of the fun in this montage comes from hearing Vince McMahon react to various hockey penalties. More NHL announcers need to belt out a horrified “Give me a break!” every time somebody trips someone. Pretty sure right now it’s just Jack Edwards.

• Awesome Goon Detail no. 2: He started every match by dropping his gloves.

• The Goon always wore red, white, and black, he debuted right after the 1996 playoffs, and his favorite move was the hit from behind, so let’s just go ahead and say it: We can all agree that the Goon was supposed to be Claude Lemieux, right? Fake Diesel was a less blatant rip-off of an existing act.

• I miss prerecorded comments during wrestling matches. In this one, we find out the Goon has abandoned hockey to come to the wrestling world, “where fighting is legal.” Hey, you know where else fighting is legal? In hockey. Maybe should have researched that one a little more, champ.

• Awesome Goon Detail no. 3: He finished each interview by performing a hockey snoot.

• If you’re wondering why the Goon’s opponent isn’t fighting back, it’s because he’s what’s known in wrestling as a “jobber.” That means he gets paid to go out there, square off with bigger guys, and get pummeled, over and over again, for his entire career. We have that same job in hockey, but we call it “being Matthew Barnaby.”

• “And the Goon showing some degree of athleticism by that sidestep …” Wait, what? That counts as athleticism? He literally took one step to the side. Even I can do that, without injuring myself too badly, roughly 60 percent of the time.

• Awesome Goon Detail no. 4: His wrestling boots are painted to look like skates. Look, if you’re not becoming a Goon fan at this point, I really don’t know what to tell you.

• As you can see, most of the Goon’s offense involves just running into guys, which the announcers keep calling a crosscheck even though he’s not using a stick. In this case, he knocks his helpless opponent out of the ring to set up his big finisher.

• And there it is: the running hit from behind into the side of the ring, leading to a countout. That’s easily the worst finishing move in history, right? I can’t think of another wrestler whose finisher was designed to lead to a countout. How are you ever going to win a championship that way, when titles can’t change hands on a countout, idiot? (I may have thought about this too much over the last two decades.)

• And that’s it. The Goon gets the victory and salutes the crowd, although he somehow doesn’t ride his stick around Tiger Williams style.

• If you’d like to see the Goon facing some slightly tougher competition, here’s his match against the Undertaker. Spoiler alert: It does not go well.

The Goon’s WWE career was short-lived; he was dropped from the roster within months. He did make a brief comeback years later when the WWE staged a WrestleMania battle royal featuring history’s worst gimmicks. He was eliminated by a Bushwacker.