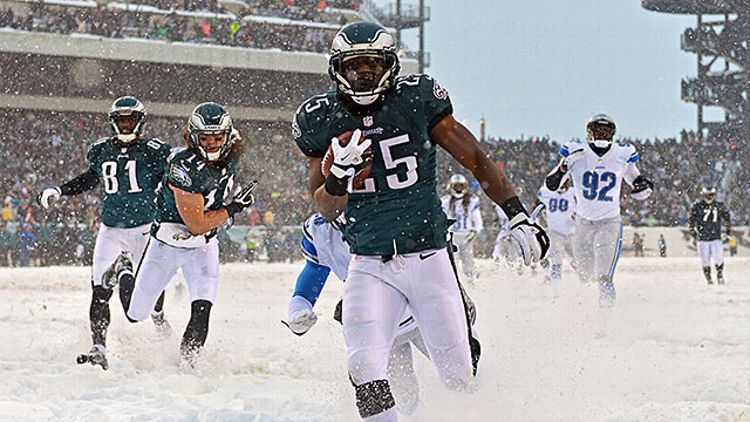 LeSean McCoy: Weather was a theme all over the league yesterday, but what happened in Philadelphia was something entirely different. I can’t remember a game in which diving for the ball meant players temporarily disappearing.

When McCoy did this to Glover Quin in his (ridiculous) second half, part of me was worried it would end with Quin buried deep enough that he’d never be found.

This was the McCoy game that has seemed so close all year but has never quite happened. His 184-yard debut came on 31 carries, but since Nick Foles took over, there have been plenty of underwhelming outings. Apparently it took a blizzard to finally bring McCoy’s open-field advantage to an unfair place. McCoy has led the league the past two seasons in broken tackles, according to Football Outsiders, and I’m guessing he will again this year. His 1,305 rushing yards now lead the league, and if he somehow managed to string together a couple more big games and got to 1,600 for the year, I don’t know who would be surprised.

As for the Eagles, it was maybe their most impressive win of the year. Not only was Sunday a chance to grab an advantage in the race for the 3-seed in the NFC — it was a chance to show that Philly is capable of winning a different sort of game. The Lions had given up an average of about 40 yards on the ground in their past four games. McCoy had 217 on his own.

Falcons: Similar to what happened in New Orleans a couple of weeks ago on Thursday night, this was a perfect game for the Falcons. They keep managing to avoid utter embarrassment as they stick around in every game, but every loss brings them closer to a top-two pick and possibly landing Jadeveon Clowney. Accidentally tanking while maintaining the smallest shred of dignity is nearly impossible to pull off. Just ask the Texans.

Matt Prater: We probably should have known Prater would break the field goal distance record at some point this year. It seems like Denver already has, or at least will have, every other record relating to scoring points by the time this season is over.

There are people saying that Prater’s 64-yard field goal deserves an asterisk, which I don’t really get. The Broncos have been a franchise since 1960. Some quick math there conservatively puts the number of NFL games played in Denver somewhere around 425. So far, no one playing in those games managed to kick a 64-yarder. Let’s give Matt Prater this one; he seemed pretty excited about it.

Drew Brees: Now with 50,000 career passing yards, a Lombardi Trophy, godlike status in New Orleans, and more proof that he and Sean Payton are impossible to beat in prime-time games at home.

Keenan Allen: Allen only finished the day with 59 yards on three catches (he was banged up for a stretch), but two of those catches were touchdowns. On the season, that brings Allen to 61 catches for 902 yards and five touchdowns. And that’s with a combined four targets and 30 yards receiving in his first two games.

Considering he plays in San Diego and the Chargers are likely to miss the playoffs, there’s a good chance Allen misses out on an Offensive Rookie of the Year award that should be his, but he’s definitely making a push as Eddie Lacy and the Packers continue to stumble. If Allen manages 98 yards combined in his next three games, it will get him to 1,000 on the season. Since the merger, only 11 rookie wide receivers have hit that mark. You’ve heard of some of them: Randy Moss, Anquan Boldin, Terry Glenn, A.J. Green, Joey Galloway, Marques Colston. Of that group, only Moss and Boldin were named rookie of the year, and it took more than 1,300 yards from both.

Maybe the more encouraging stat for Chargers fans is that nearly every one of the players to hit 1,000 yards as a rookie finished with more than 8,000 career receiving yards (and Green is well on his way). The Bucs’ Michael Clayton was really the only one to fall off after a huge rookie season.

The seasons Allen and Philip Rivers are having right now make the Chargers’ bad losses even more depressing. Does anyone really want this Baltimore team in the playoffs? A rejuvenated Rivers (completing 70 percent of his passes, just like Mike McCoy said he would) and that San Diego offense would at least make any wild-card game watchable. Cincinnati-Baltimore might be all that people on the fence need to quit football. Unless …

The Bengals’ offense: … the Bengals play like this! It’s possible Cincy’s offensive explosion is the result of this Colts team being awful, or that Andy Dalton will remember he’s Andy Dalton by next week, or some combination of the two. But right now, there’s a very real “Why not the Bengals?” case being built. The Patriots needed a miracle yesterday to beat the Browns at home, and they’ll be without Rob Gronkowski for the rest of the year. We’ve already seen that New England is a completely different team without him, and if the Pats drop one more game while the Bengals win out, Cincinnati will be the team with a first-round bye.

And it should be. As injuries have crippled other teams (the Pats have done an incredible job of withstanding them, too, but Gronkowski is different), Cincinnati has managed to keep on rolling. The team lost Leon Hall and Geno Atkins — its two best defenders — and the Bengals were still fourth in defensive DVOA heading into Week 14. With left guard Clint Boling out for the season, Pro Bowl left tackle Andrew Whitworth was forced to slide down to play guard yesterday and leave backup tackle Anthony Collins matched up with NFL sack leader Robert Mathis. The Bengals threw the ball 35 times. Andy Dalton wasn’t hit once.

The last ingredient to the Bengals being watchable is Giovani Bernard, whose touches are finally approaching an acceptable level. He averaged 8.3 yards per carry and also had 49 yards receiving yesterday. For our sake and the Bengals’, let’s hope Jay Gruden is ramping Bernard up for the playoffs.

Antonio Brown: As the ball was flung from Steeler to Steeler on the final play, I thought one thing: Please let Antonio Brown end up with this.

It hasn’t been a great year in Pittsburgh, but that’s no fault of Brown’s. He’s fourth in the league in receiving yards, second in receptions, and just behind Josh Gordon and Calvin Johnson in “Holy shit, did you see that?” plays (unofficial). What he did to Chykie Brown on Thanksgiving may be worse than Shady sending Quin to his icy doom. When Brown caught the probably-forward lateral from Ben Roethlisberger yesterday, he already had a ridiculous 43-yard touchdown.

Alterraun Verner: Verner’s story is similar to Brown’s in that yesterday included a moment that wasn’t a great indicator of just how great he’s been all season. Unfortunately for Verner, he had about seven of them.

The Titans corner has been among the league leaders in interceptions all year, but more than that, he’s also been one of the better cornerbacks in football. None of that mattered yesterday. Peyton Manning abused Verner all day. Verner drew three flags for a variety of offenses and was burned at the goal line more than once. Tennessee’s cornerback tandem is one of the best in football, and the Titans came into yesterday ranked 12th in pass defense DVOA. Manning doesn’t have time for any of that, apparently.

Anyone concerned with the sustainability of football: In so many ways, yesterday should have been great for the NFL. Exciting finishes (Baltimore-Minnesota, New England–Cleveland), great teams (Denver), and great games (Seattle–San Francisco) made for one of the more fun-filled days of this season. But yesterday also felt like this season’s obligatory week in which too many guys are getting scraped off the field. The Gronkowski hit leads the charge — like this year’s one on Randall Cobb, a product of a defensive player avoiding a flag by going low — but there were plenty of others. The Tyrann Mathieu injury sucks. He had a legitimate case for Defensive Rookie of the Year, and Cardinals still have a shot at the playoffs. Adrian Peterson might be done for the season; Wes Welker had his second concussion in three weeks. There seemed to be more carnage than normal yesterday, and that’s the problem. Even when the rest of football is everything we want it to be, that side of it still lurks.

Everything about the Washington professional football franchise: Remember last December, when Robert Griffin was the ultimate savior, and Washington was going to the playoffs, and everyone loved each other? That was fun.

That’s been replaced by empty stadiums and leaked reports that Mike Shanahan cleaned out his office in January because he’d become so disillusioned with Dan Snyder’s anointing of Griffin. I guess that leaves a bright spot in all this: At least Shanahan won’t have to worry about quitting this year.