Sacrificed to the System: Sorting Through Chip Kelly’s Decision to Release Evan Mathis 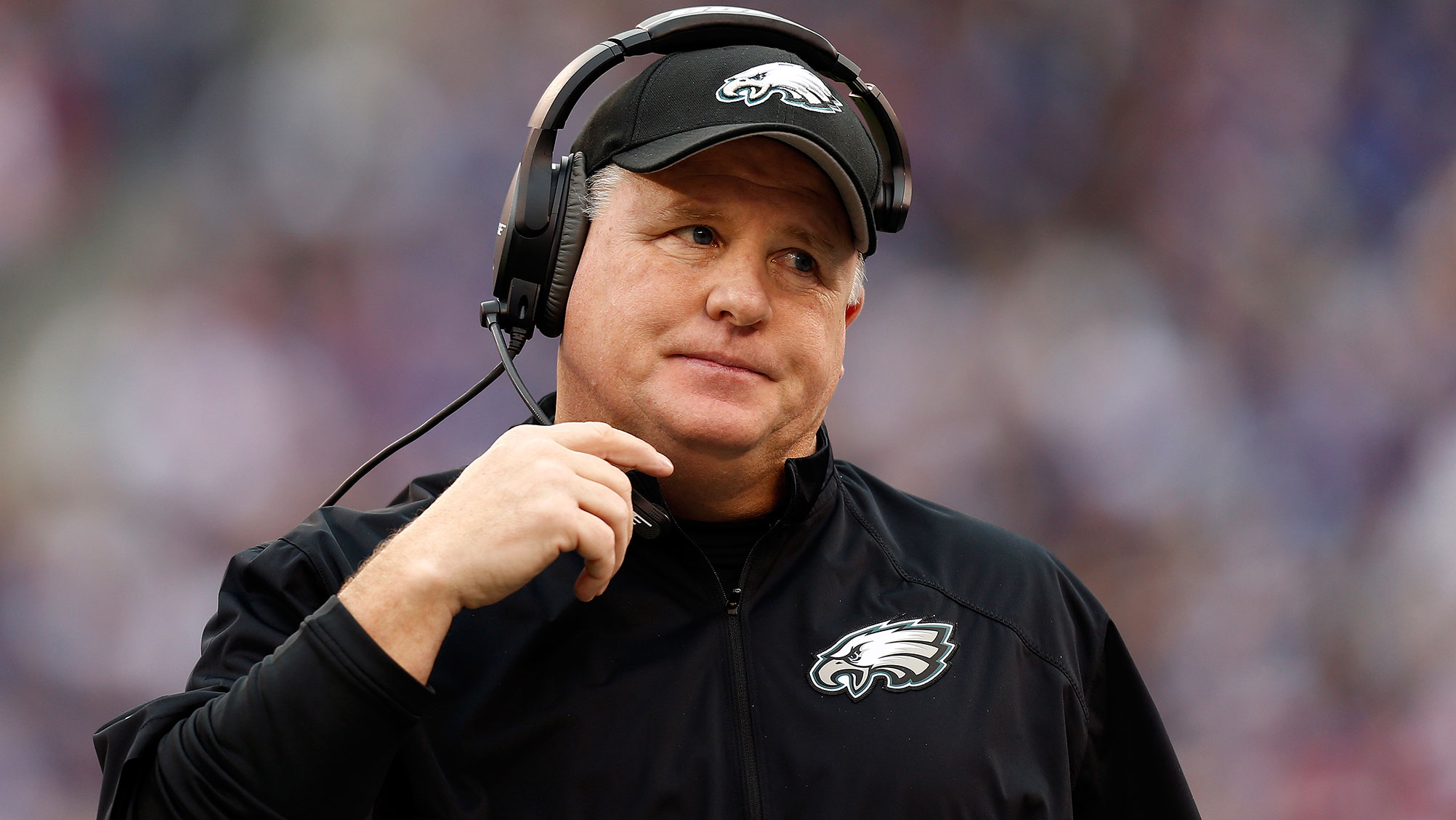 Anyone who’s followed the back-and-forth between Evan Mathis and the Eagles couldn’t have been shocked by how the situation played out late last week. Fresh off of two trips to the Pro Bowl, the 33-year-old Mathis wanted to renegotiate the five-year, $25.5 million deal he signed before the 2012 season — a.k.a. before he’d developed a reputation as one of the better offensive linemen in football. The Eagles didn’t quite see it the same way, and after a brief standoff that included Mathis missing the team’s OTAs, Philadelphia released its starting left guard on the eve of mandatory minicamp.

After his release, Mathis suggested he had been ready to put contract talks on hold, showing the Philadelphia Inquirer’s Jeff McLane his flight information for his planned return to minicamp. Addressing reporters yesterday, Chip Kelly said that releasing Mathis was in line with the requests of Mathis’s agent, Drew Rosenhaus. While Mathis acknowledged to McLane that the idea of a release had come up if the Eagles weren’t interested in trading him or renegotiating, he claims that was in March and that there hadn’t been any requests from his camp since.

Kelly has maintained that the decision to let Mathis go was motivated by money and not because he thought Mathis’s contract unrest would cause a problem in the locker room, but at $5.5 million this year, the Eagles would’ve been getting an elite guard on a notably team-friendly deal. Instead, all of this seems like yet another indication that Kelly’s system — and filling it with players who get in line — is what matters above all else. And with Mathis gone, we’ll have our best chance yet to see if he’s right.

Shipping LeSean McCoy to Buffalo or letting Jeremy Maclin walk in free agency seem to be moves aligned with that same type of system-centric thinking, but in both cases, there was at least an argument to be made that, either schematically or financially, both moves were in the Eagles’ best interest. McCoy is being replaced by two downhill (if injury-ridden) running backs, and Nelson Agholor, Philly’s first-round pick, has a lot in common with Maclin and costs a fraction of the price.

Rationalizing the Mathis move is more difficult. He may have wanted a raise, but as is the case in the majority of these scenarios, the Eagles owned just about all the leverage. Even in Kelly’s world, where he seems to believe he can turn anyone into a reasonable player, it’s hard to argue that Mathis was overpaid. And from a schematic point of view, Mathis is pretty much a perfect zone-blocking guard for Kelly’s scheme. Even before Kelly arrived, Mathis had begun to flourish in Andy Reid’s zone-heavy offense after wandering the NFL desert for the first six years of his career.

Mathis’s age likely played a part in Kelly’s thinking, but it has also become clear that Kelly has less than zero patience when it comes to dissension. DeSean Jackson is gone. McCoy, who has a reputation for being difficult at times, is gone. And now Mathis, who isn’t exactly shy, either, has joined them. Wanting a team full of players who totally buy in is fine, but trying to control a group of 53 millionaires, many of whom have their own opinions, may be a little tougher than managing the culture Kelly tried to create at Oregon. Rubbing Kelly the wrong way comes with consequences, but so does replacing Mathis with journeyman Allen Barbre.

When the Eagles were rolling on offense two seasons ago, the surprise and creativity of Kelly’s offense played a significant role, but so did the dominance of Philly’s offensive line. The same five guys started every game of both the regular season and playoffs that season, and it showed: They finished no. 1 in rushing DVOA by an insane margin. Again, some of that is scheme — there were holes during that stretch that made even having offensive linemen unnecessary — but last year, with a year of film for opponents and a slew of offensive line injuries, Philly took a noticeable step back. After Mathis missed the first half of the season with an MCL sprain and Jason Kelce and Todd Herremans spent some time on the sideline, too, the Eagles finished 13th in rushing DVOA.

In 2014, Philly suffered from a lack of offensive-line continuity as well as a drop in talent, but the point remains: It’s way easier to dominate on the ground when you have the best run-blocking line in football. This year, Kelly is willingly walking into the season without a significant part of that group. Just how significant was it? We’ll find out in a couple of months.

Like he’s supposed to, Rosenhaus came out this week and informed the media that “at least a half dozen” teams were interested in Mathis. Based on his reputation, that’s not a surprise, but there are a few factors that play into figuring out the best destination for him. First of all, a team probably needs a reasonable amount of cap space if it’s going to give Mathis anything close to the deal he’s looking for. The top guards in free agency this year, Mike Iupati and Orlando Franklin, got deals with a yearly average of $8 million and $7.1 million, respectively. At 33, Mathis isn’t looking at that type of money, but he obviously wanted more than the $5 million or so he was slated to make in Philadelphia.

In an on-field sense, Kansas City would be a logical landing spot. Mathis knows Reid and has thrived in his offense before, while the Chiefs could probably use an upgrade on the interior of the line. But the money makes that move tough to pull off. According to Over the Cap, the Chiefs have less than $1 million in cap room, and although their cap gets much healthier in 2016, they still have some big spending to do, especially with Justin Houston in line for a massive new deal.

Surveying the rest of the league, three teams fit the profile of a Mathis destination: They have a need at guard, run a zone-heavy scheme, and have the money to make a run at him. The Giants have more than $7 million in cap room, and although their two starting guards at the moment are a sought-after 2014 free agent and a 2013 first-round pick (Geoff Schwartz and Justin Pugh, respectively), both have the positional flexibility to move around if needed. Schwartz has played right tackle in the past, and Pugh spent his first two seasons there. Although Pugh is currently penciled in at left guard — and although the Giants drafted Ereck Flowers, a tackle, with their first-round pick this year — there would still be a way to get the five best linemen on the field if they were to bring Mathis in.

With the other two teams that make the most sense, though, there’s no shuffling necessary. Right now, Denver and Gary Kubiak have Ben Garland — a former undrafted free agent who was a practice-squad defensive lineman at one point — and Shelley Smith as their options at left guard. Nothing against either of them, but I’d say Mathis would be a bit of an upgrade. With more than $7 million in cap room, the Broncos would likely be able to make it happen.

However, my favorite destination is a team that was rumored to be interested in Mathis via trade before the draft: the Dolphins. They made plenty of splashes this offseason, but guard is still the biggest weakness on their entire offense. Not only would Mathis rectify that, he’d also be stepping into an offense coordinated by Bill Lazor, who was Kelly’s quarterbacks coach in Philadelphia before taking the job in Miami. There’s no offense in football that more resembles the one in which Mathis dominated than what Lazor has put together in Miami. Landing Ndamukong Suh is going to define the Dolphins’ offseason no matter what, but if they can somehow bring Mathis into the fold, that would be the final piece of an impressive few months for that front office.