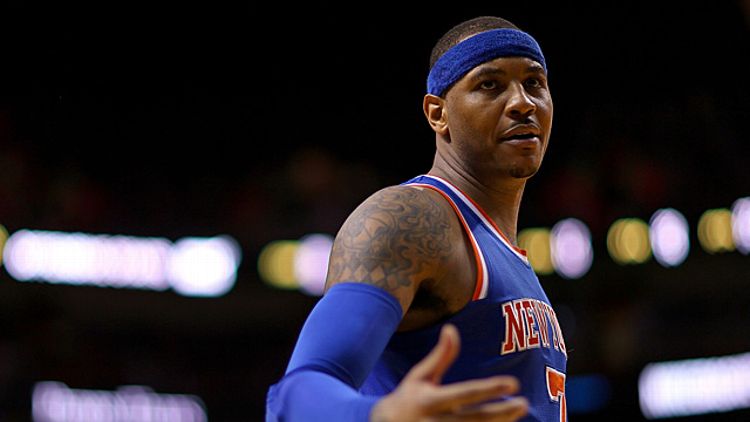 There was something quiet about Carmelo Anthony’s 50-point game in Miami last night. Maybe it was the already reserved Heat crowd seeming downright sunburned and hungover, with one eye on their postgame Chilean sea bass. Or maybe it had more to do with the absence of LeBron James and Dwyane Wade. Or the fact that the Knicks game felt like a coming attraction in the shadow of the blockbuster entertainment that would take place in Los Angeles a couple of hours later. Whatever the reason, it didn’t feel like a 50-point game.

So let’s give our man, our Melo, some credit. That was his career high in a Knicks uniform. He achieved the mark by taking nary a shot in the paint, a fact that was noted by Shane Battier (“That’s a game that drives the analytics guys crazy because he didn’t attempt a shot within 15 feet of the basket”) and Kirk Goldsberry (unavailable for comment because all his charts were on fire). In fact, according to ESPN Stats & Information, Melo’s 18 field goals from at least 15 feet away were the most made in an NBA game in 17 seasons. While Melo didn’t have to face LeBron during the game, he did get a wide array of Battier elbows, face-guards, trips, nudges, and probably even some vexing trivia questions. That’s nine in a row for a New York team most people (hi) assumed would be producing a team production of Cocoon right about now, not surging into the playoffs.

“It’s an inopportune time to announce my candidacy for defensive player of the year.”

Yeah, it was Shaq’s night. OK. Sure. Whatever.