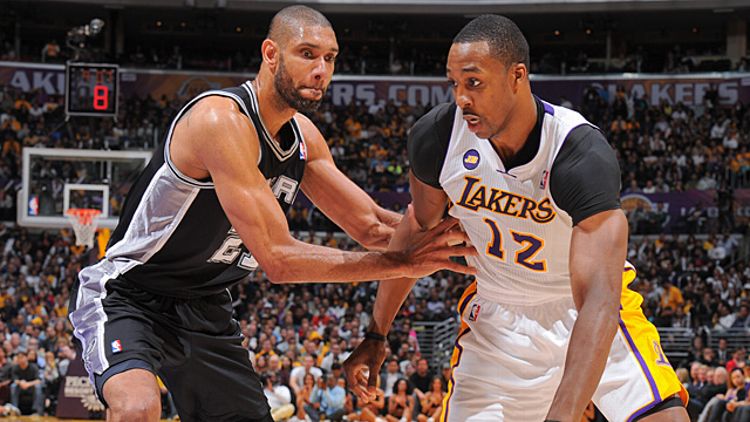 Well, this should be interesting. That’s Dwight’s fifth game this season with at least 25 points and 15 rebounds. He got 26 offensive touches in the paint, and went 9-15 from that same area. This is what the Lakers are now. This, and Pau Gasol. And, of course, Andrew Goudelock, “the garden snake.”

And that, my friends, is that. I saw this Marreese Speights quote on Michael Levin‘s Twitter feed after the Sixers actually won a game (they beat Speights’s Cavs). A couple hours later, Sixers head coach Doug Collins announced he would be leaving the team at the end of the season. In retrospect, the writing was on the wall when Collins’s assistant coach, Brian James, took a gig to work with Collins’s son, Chris, on the bench at Northwestern. The writing was also on the wall because the Sixers have had a Hindenburg of a second half of the season. It was pretty obvious that a classic year-three tune-out had occurred in the Sixers locker room. Collins’s overbearing, overly emotional coaching style had alienated his players, just as it had in Chicago, Detroit, and D.C. Collins fostered overtly paternal relationships with many of the Sixers’ young players, and like all paternal relationships, eventually, sons just want their fathers to leave them the hell alone.

The Doug Collins effect was actually pretty profound in Philadelphia. He revived a franchise that was still looking for an identity in the post-Iverson era, got them into the playoffs his first year, and led them on an improbable run to the Eastern Conference semifinals (Derrick Rose’s knee also helped with that) in the following season. Then came the Iguodala, Vucevic, and Harkless–for–Bynum trade. Then came Bynum-goes-bowling. Then we came to the end. Collins has a career .521 winning percentage. Maybe Speights is right. Maybe he is just all right. He comes in for one season and energizes a club with his vulnerability, honesty, and obvious teaching skills. He makes deep connections with players. Then he gets antsy, he starts giving up on projects he had seemingly invested so deeply in, and players start to tune him out. He’s a great one-year fixer, but in the modern NBA, one-year thinking is the worst kind of way to run your franchise. Look at the state of the Sixers if you need any proof of that.

Just days after releasing Stephen Jackson from his playoffs-bound team for what he deemed “a basketball decision and a family decision,” Gregg Popovich benched Tony Parker for much of the fourth quarter of the Spurs-Lakers game on Sunday night. Was this to protect Parker from injury going into the postseason? Another act of progressive minutes management on the part of Pop? Was he trying to keep Parker fresh for what will no doubt be a brutal Western Conference campaign? Was Parker nursing an injury? “He’s totally healthy. It wasn’t because he was resting, he was playing awful.” Never change, Pop.