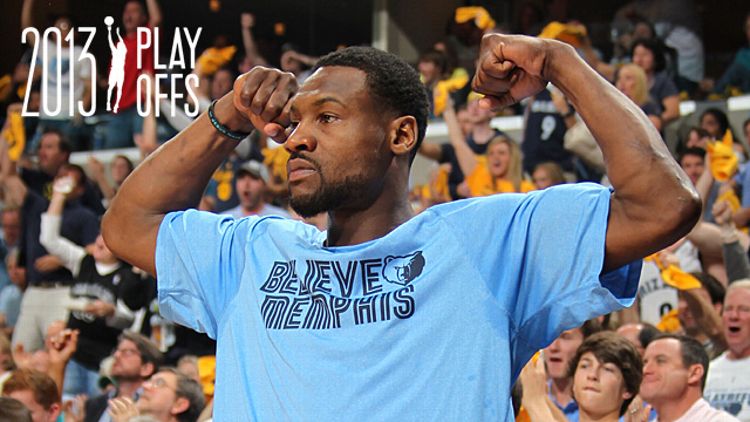 May 14, 2013
by Andrew Sharp, Brett Koremenos and Danny Chau

Danny Chau: I’ve replayed Tony Allen’s game-clinching steal in Game 4 a hundred times and it doesn’t get any less awesome. Kevin Martin fakes a pick for Kevin Durant, which leaves him completely open behind enemy lines. All Derek Fisher had to do was bullet it to Martin and he most likely would have had an easy basket or gotten fouled by a recovering Marc Gasol. Instead, Fisher opts for a bounce pass that travels at a rate slower than the man himself. Allen sees this somehow, and pirouettes around Gasol in the paint to snatch the ball and essentially seal the victory. It all happens in less than a second. The crowd roars and starts a “TONY!” chant during the timeout. He blows a kiss right back at them. It’s love. It’s that simple.

You get a sense that they appreciate things differently down in Memphis. They accept most of Allen’s feckless layup attempts because one day, when the moon’s glow is just right, some fool is going to bite on one of his pump fakes from way out in the boonies (relative to Allen’s range), and he’ll have a layup so easy even he can’t miss it.

And the fans will cheer because he deserves it, he who has spent his entire career mastering the most difficult craft in basketball, which has left him more or less incapable of making a sensible offensive play. But it’s a fair price to pay, and no team understands that more than the Grizzlies. Allen could play for any team he wants next season, but on any other team, he’s just a defender. In Memphis, he’s a spirit animal.

2. The High-Post Artistry of Marc Gasol

Sharp: ESPN’s Brian Windhorst has an article out detailing Wade’s ailing knee, and it is full of terrifying sentences if you are a Heat fan. For instance, “Wade has been dealing with an injury to his knee since March, five different times missing games because of it. He has twice taken two weeks off to rest it. It has not helped that he has repeatedly aggravated it, which isn’t hard to do playing competitive basketball.”

See, when you spell out the time line like that, it really does seem like this could be a problem.

“Wade revealed at one point he actually has three bone bruises in the knee.”

“I’m taping it,” Wade said. “When you have a [bone] bruise, you try to move the kneecap over so it won’t rub.”

GOOD LORD. I’m not a doctor and I’m sure he doesn’t mean they’re literally shifting the kneecap over (right?), but this doesn’t sound good. My knee hurts just reading it and imagining his Jell-O kneecap floating around there. And this is where we remember that the Heat have been struggling with the Bulls’ B team (until last night, anyway), Wade is averaging 12.3 points per game and looks 40 years old in these playoffs, and if he can’t get right by the time the Heat actually play a contender, the team that was completely unbeatable two months might actually be … beatable? Right? Maybe? Let’s say maybe.

Brett Koremenos: Jackson had the kind of Game 4 you’d expect from an inexperienced young player. Occasional flashes of brilliance, like his gravity-defying first-quarter dunk, punctuated by what will likely be remembered as a rather dreary performance. Jackson made two crucial mistakes in overtime — a wild lunge at a Tony Allen shot fake and an equally silly offensive foul — that will be hard to purge from his or any Thunder fan’s memory when they think back on this series.

Russell Westbrook was hardly the most astute decision-maker, but his understudy’s inexperience has forced Kevin Durant to shoulder a responsibility that even he’s unfit to handle. It’s a situation that is a fertile breeding ground for resentment and negativity, toward both Jackson and the Thunder organization as a whole. But the absence of the Thunder’s star guard and the team’s ensuing struggles has also created something vitally important for Jackson — an opportunity to fail.

There is no sarcasm behind that last phrase. Failure is a key part of success. Whether you’re an artist, an entrepreneur, or a basketball player, the times you don’t succeed typically allow you to grow the most. For Jackson, he is making his mistakes in the pressure cooker that is the NBA playoffs, something that if used in the right way can rapidly accelerate the learning curve for a young player sorely lacking maturity in his game.

Oklahoma City fans don’t want to hear that right now. Their team’s season is on life support. After all, they’d much rather have “Reggie Jackson, the second coming of Westbrook” than “Reggie Jackson, guard making boneheaded gaffes in critical moments.” Unfortunately, things rarely work like that. At some point or another, NBA players have to experience some growing pains before ultimately fulfilling their promise.

Sharp: There are a number of ways celebrities can show love for their favorite team. You can go the Justin Timberlake route and just keep it simple with a couple of popular hashtags. That’s cool.

Or keep it even simpler, like Juicy J. Twitter’s translator says this is Italian.

Or look to the other half of Three 6 Mafia, DJ Paul, and SHIT JUST POST AN INSTAGRAM OF A GRIZZLIES HAT ON A STACK OF GUNS ’CAUSE MOTHERF---ER THIS IS MEMPHIS. WE DON’T BLUFF.