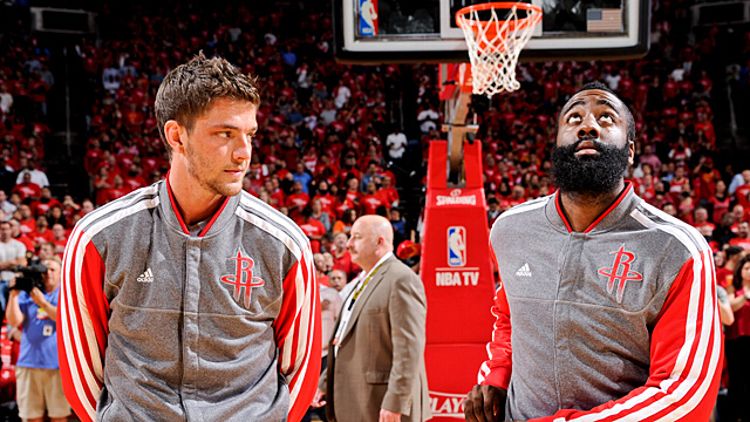 A survey of the players and teams making moves in last night’s NBA playoff action.

(All GIFs by @HeyBelinda, unless otherwise noted)

Chris Ryan: At various points last night, during Grantland Live’s live-tweet coverage of the Rockets-Thunder game, Chandler Parsons was compared to Brad Pitt’s character in True Romance and someone out of a Whit Stillman movie, was described as trade bait for Dwight Howard, and had his possible Los Angeles real estate preferences scrutinized (Manhattan Beach, Beverly Hills). Funny thing happened on the way to making fun of Chandler Parsons: Dude saved the series for Houston.

Parsons played the hero by doing everything James Harden wasn’t. Typically, Houston’s offense runs off Harden power. His drives create opportunities for his teammates, and when the game needs to be slowed down, his theatrical skills/ability to draw contact gets him to the line. He’s the perfect player for Kevin McHale’s offense — everything happens at the stripe, the hoop, or behind the arc. Unfortunately, last night, Harden played like a butter-fingered narcoleptic (more on that in a sec).

Luckily for Houston, Parsons was everything Harden wasn’t. The Florida basketball legend came out of halftime and practically took over the game, scoring 16 second-half points, ending the night with 27, and adding 10 boards and eight assists for good measure. The last time a Rockets player put up at least 25, 10, and eight in the playoffs? Hakeem Olajuwon. That’s right. Chandler Parsons is the new Hakeem Olajuwon. Don’t forget the little people, Chandler.

if we lose, i’m tweeting out @yayeezy phone #. Had the team out partying & shitHardin starting to wake up tho

I know what you’re thinking, and the answer is, yes, I was on Slim Thug’s timeline. Dubious sources or no, James Harden certainly didn’t play like a guy who got his beauty sleep the night before.

Robert Mays: After Kevin Durant cleansed himself of all Carlos Delfino–related shame by bringing the hammer down to cut the Rockets’ lead to 2, Kevin McHale called timeout. The dunk followed a 3 from George Bush International on the previous possession. KD seemed through with all this silliness.

Coming back from commercial, the bridge of Metallica’s “Enter Sandman” was blaring throughout the Toyota Center. Of all the songs in the world, whoever controls the music in Houston opted for one about a terrifying mythical figure who puts people to sleep for good, just as a terrifying mythical figure was trying to put the Rockets to sleep — for good.

Things didn’t quite work out that way, of course, but that still doesn’t explain our man’s thinking. Supporters will likely point to an attempt at a reverse jinx of sorts, but I’m going a different route. That cross-body-block of a defense from Omer Asik on the final possession seemed like something a little extra, and I’m sticking with a theory that the song was all a motivational ploy for Omer, who I can only assume is a big post-Justice Metallica guy. Omer rides for “Until It Sleeps,” and a DJ who knows that kind of thing is the reason the Rockets are still around.

4. The Fact That Scott Brooks Needed a Timeout to Draw This Up

Brett Koremenos: In the waning moments of a back-and-forth Game 4, the Thunder’s Derek Fisher secured a wayward shot from James Harden and quickly handed the ball off to Kevin Durant. As Durant focused his gaze on the disarray in front of him — a quintet of Rockets retreating toward their own basket in attempt to protect their two-point margin — the play was halted by a timeout from head coach Scott Brooks. Durant hadn’t taken a single dribble. In the blink of an eye, an advantageous situation where Durant and his teammates could attack a scrambling, disorganized defense had disappeared.

This was classic over-coaching. Instead of pushing the ball in transition, Brooks sent his Thunder team up against a coordinated Houston defense. Brooks doubled down on his mistake with a decided lack of creativity in his play call coming out of the timeout. The Rockets forced Durant to give the ball up, anarchy ensued, and, incredibly, Serge Ibaka still wound up with a chance to tie things up with a point-blank layup at the buzzer, a shot the big man failed to convert.

The moaning and groaning over Ibaka’s failure to extend the game with a relatively easy look somewhat hid the fact that the real mistake was in Brooks’s decision to call a timeout minutes earlier. Given the Thunder head coach spent the evening watching Durant play seemingly the entire game with a defender tucked neatly into the front of his jersey, the prudent choice would’ve been to allow his star forward to attack the Rockets without a break in the game. In fact, there’s evidence out there showing this unscripted approach would’ve been the right call not just for this specific situation, but anytime Brooks is faced with such a choice.

The problem with such a notion is that it doesn’t fit the narrative of what coaches are supposed to do. Coaches rarely, if ever, get criticized for calling a timeout in these situations because that’s just what we’ve come to expect (after all, there’s a reason the last minute of a close game takes an eternity to finish in real time). If fans watch a game these days and see a coach not doing things — drawing up last-second plays, screaming at players, arguing calls — it makes them question whether a coach is doing his job.

As Beckley Mason points out above, this mindset leads Brooks and many other coaches to fall victim to “Hero Coaching,” in a vain attempt to show they have control over the proceedings. But by subscribing to such a mindset, Brooks lessened the chances of a positive outcome for his team — the exact opposite of what a head coach is supposed to do.

5. Special Brooklyn Bonus: The Dude Sitting Courtside in Neon at the Brooklyn Game, Practicing Foul Shots Along With Deron Williams