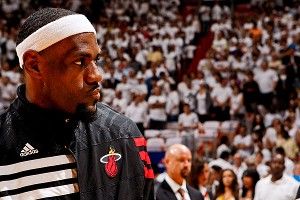 Dexter Pittman: “Hey LeBron, did you see what I did?”

LeBron James: “You mean, going out of your way to elbow Lance Stephenson as hard as you could in the final minute of a game that we were leading by 35 points?”

LeBron: “I saw it, thanks for that. You’re probably getting suspended, though.”

Dexter: “Yeah, but he’ll never give you the choke sign again, that’s for sure! I SHOWED HIM!”

LeBron: “You sure did, Darius.”

Dexter: “If you want, I could try to run him over in the parking lot as he’s walking to the Pacers’ bus.”

Dexter: “You want to grab something to eat?”

Dexter: “Well, if you ever want to hang, lemme know.”

One Piece of Advice for Dexter Pittman

The ‘It’s Only a Flesh Wound!’ Award: Lance Stephenson

Pittman got me good. My shoulder feel like its broke but I’m ok everyone let’s go Pacers game 6

Quote of the Night: Larry Bird

Following his team’s figurative and literal butt-whipping at the hands of the Heat: “I can’t believe my team went soft. S-O-F-T. I’m disappointed. I never thought it would happen.”
— Ryan

After the Lakers blew out Boston in Game 3 of the 1984 Finals, a pissed-off Larry Legend called out his teammates and said they played like a “bunch of sissies.” What happened next? Kevin McHale clotheslined Kurt Rambis, the Celtics won the Greatest Game Ever Played, the series turned and the rest was history. I’m just sayin’.
— Simmons