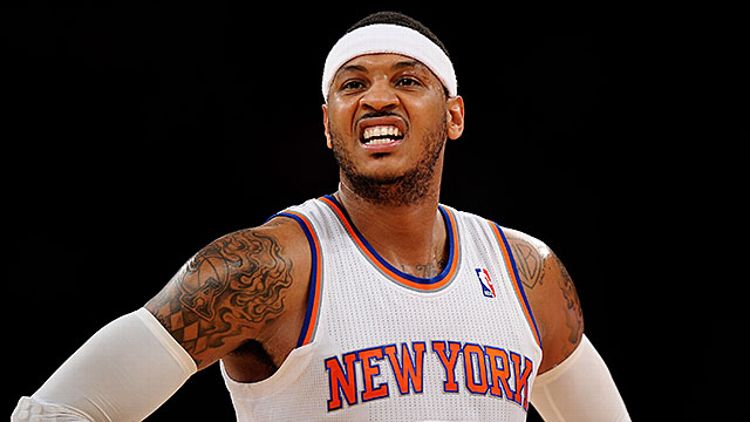 Every once in a while, the NBA throws a randomly awesome night at us and we need to run through the games and savor the flavor. Last night was one such night. Dig in.

The Agony of the Knicks, the Ecstasy of the Wiz

YEAH. THAT’S JAN VESELY DUNKING IN TRANSITION ON AMAR’E. NO, YOU ARE NOT ON AYAHUASCA. Eastern Conference basketball, guys. To paraphrase Man on Fire, not coaching well is Mike Woodson’s art, and last night’s Knicks-Wizards clash was his masterpiece. The Knicks lost the game with the fart-pratfall double-whammy of the season, when Beno Udrih funneled Bradley Beal baseline with just seconds remaining and nobody came to help. This was the Knicks’ reaction to it all:

Image of the Knicks’ season? pic.twitter.com/CJFD5wXuto

The fun didn’t end there. With the clock winding down, the Knicks players thought Woodson was going to call a timeout to draw up a last-second play. That did not happen!

Melo on Woodson accepting blame for not calling timeout: "If he said it’s his fault, it’s his fault. There’s no need for me to talk about."

After the game, the Wizards players were talking about the Knicks defense like they had just seen a UFO land in Times Square. Beal said, “There was absolutely nobody there.” They were pretty hype after the win, too!

The big thing for the Knicks is they are terrible.

OK, so you probably know that the Clippers beat the Spurs at Staples last night. Blake went off for 27 (11 of which came from the line), and we got to see good DeAndre (super busy on defense, hustling all over the place, three blocks, 11 rebounds) and bad DeAndre (five turnovers, tried to lose the game all by himself in the third when he got two personals and a tech in a matter of minutes). The game was pretty much over when Tony Parker left with a shin contusion in the second half. This was one of the best-coached games I’ve watched in a while. Every substitution or play call from Doc Rivers or Gregg Popovich seemed to be the perfect call at the moment; each kept going after the other team’s weaknesses and tried to expose mismatches. It was basically like going to an awesome seminar on coaching. I wish I could watch it every night.

The most important action, however, took place after the game, when we got to see Gregg Popovich in all his “everybody’s favorite uncle” glory. His team just got smacked in the mouth by a conference rival, losing by 23 points. Did Pop sulk or storm off the court? Hell no. He went up to Stephen Jackson, who, just a few months ago, was released by San Antonio right before they went on their awesome playoff run into the Finals. According to Pop, showing Jax the door was best for him, “so I wouldn’t go crazy.” Jax’s response? “I wouldn’t want me on the team, either.”

Jackson is on the Clippers now. You might expect there to be a little tension in the room, but that couldn’t have been further from the truth. After getting spanked on the road, Pop ambled out onto the floor like it was a family reunion, playfully yanked off Jackson’s headband and stuffed it down his jersey while he was hugging Tim Duncan (like, really hugging him), and then turned to Jamaal Crawford and gave him a Brando-Godfather smack on the face — all the while laughing his ass off like the tenured, ringed-up genius he is. What an absolutely awesome human being. I love the NBA.

The Nets Lit the Sixers on Fire

IS THAT JOE JOHNSON’S MUSIC I HEAR? J.J. hit 10 3-pointers and the Nets put up 130 points on the Sixers. I can’t decide what’s crazier, the Nets hitting 20 total 3s, or these plus/minus numbers from the Sixers:

How do you put up a minus-40? Do you have to actively be playing for the other team? All I know is that this is some exclusive Grantland footage taken at the most recent Sixers shootaround:

Josh Smith went for 30 points, seven boards, and five assists and the Pistons handed the Pacers their first loss at home. Mo Cheeks: “We have a good basketball team.” This remains to be seen, but it is nice to see Indy and Detroit have a semi-relevant rivalry going again. The Drummond-Hibbert battle was especially interesting. Drummond threw down this pile driver:

Roy Hibbert got a bloody jersey:

@Hoya2aPacer was looking good with that blood on his jersey pic.twitter.com/z16uADy2GJ