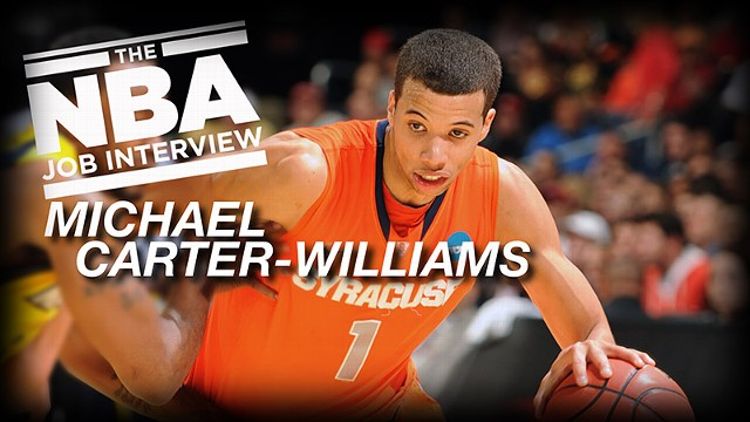 Jalen Rose and Bill Simmons talk to NBA draft prospect Michael Carter-Williams about transitioning from Syracuse’s zone defense to man-to-man defense in the NBA, and the upsides of being an unselfish teammate. Then, Bill gets a little too excited about Williams being a Celtics fan. Check out a short clip below, followed by Brett Koremenos’s scouting report and the full-length video. Watch all the NBA Job Interviews here. And watch this space for more NBA Job Interview videos, featuring Bill Simmons, Jalen Rose, and some of the best young talents from the 2013 NBA draft class.

In a league that’s being flooded with more and more small, shoot-first point guards, Syracuse’s Michael Carter-Williams is a rare 6-foot-5 distributor. Capable of being the primary ball handler on offense while checking opposing shooting guards on defense, Carter-Williams has a chance to be a play-making force in the NBA on both ends of the floor.

Not only did Carter-Williams lead the country in steals while playing in Jim Boeheim’s famed 2-3 zone, he was fifth in assist percentage, behind only one other player from a BCS conference (Baylor’s Pierre Jackson). Operating in Syracuse’s pick-and-roll-heavy system, Carter-Williams’s passing helped the Orange to yet another Final Four, though the team was forced to rely on his shaky outside shot far more than it should have.

According to Synergy Sports, the Syracuse guard used over 50 percent of his possessions to launch jumpers, a staggering amount for a player converting them at such middling efficiency. Carter-Williams does have sound mechanics for the most part (though he could use his lower half more to power his shot), so it’s possible he can improve his shooting simply through repetition. Even if he doesn’t, there is still hope.

A big part of the reason Carter-Williams was forced into so many outside shots was his experience as a college player. With no illegal defense, a closer 3-point line, and a Syracuse team bereft of shooters, Carter-Williams was forced into shots that didn’t come with the same space he might find in the NBA. Whether or not the additional room to operate and higher caliber of players around him change his approach is a big question that will help decide how high his ceiling is.

Another key factor will be how Carter-Williams fills out his frame. With a slight build, it will be difficult for the 21-year-old to handle himself against more mature and physical NBA guards, especially on drives to the basket. If his ball handling suffers and his turnovers rise, it will be hard for any coach to give Carter-Williams consistent minutes to develop early in his career. An encouraging sign for Carter-Williams was the breakout season for Greivis Vasquez, a similar passing maestro with a shaky jumper and slender frame, who played well as a starter for a surprisingly competitive New Orleans team. Overall, the outlook for players with Carter-Williams’s skill set is still very bright.