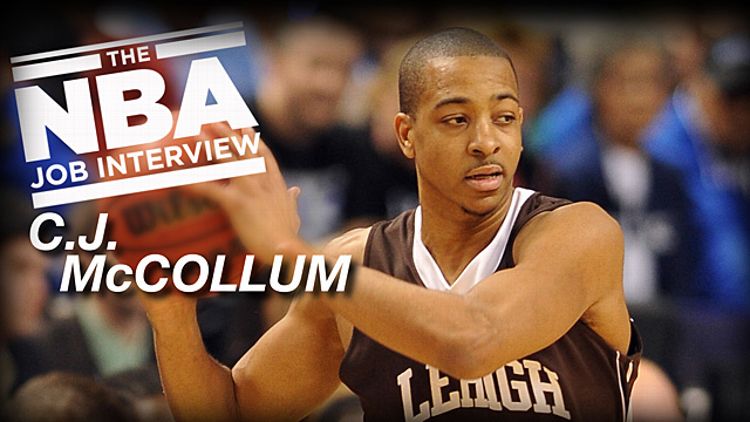 Bill Simmons and Jalen Rose grill NBA draft prospect C.J. McCollum about his lack of competition in college, how he isn’t nervous to play against anyone in the NBA, and his future as a sports columnist. Check out a short clip below, followed by Brett Koremenos’s scouting report and the full-length video. Be sure to watch this space for more NBA Job Interview videos, featuring Bill Simmons, Jalen Rose, and some of the best young talents from the 2013 NBA draft class.

Because of a broken foot suffered halfway through his senior season, C.J. McCollum has fallen out of the public consciousness a bit after exploding onto the scene with a dominating performance in an upset win against Duke during the 2012 NCAA tournament. While other prospects in this draft ooze potential, McCollum is as polished as they come. The Lehigh product operates out of the pick-and-roll like a seasoned NBA vet and scores with a variety of crafty finishes. But perhaps the most impressive and intriguing aspect of McCollum’s game is his outside shooting. Though his final season was cut short, McCollum shot a scorching 51.6 percent from behind the arc in the 12 games he was healthy. That type of shooting combined with an impressive basketball IQ (he’s just a really sharp kid in general) will make it possible for McCollum to make a Damian Lillard–like impact in his first year.

But unlike Lillard, McCollum has questions about his frame and athleticism, the latter of which is almost a non-issue on the offensive end given his advanced skill set. At 6-foot-3 with a 6-6 wingspan, most look at him as a combo guard, but his lack of bulk means it’s unlikely he will be able to match up against opposing shooting guards for an extended period of time. More likely, the 21-year-old will eventually settle into a role of sixth man or scoring point guard, similar to Boston’s Jason Terry. All in all, McCollum is one of the safest picks in the draft, possessing the skills, demeanor, and work ethic to be a solid — if not great — NBA guard for a very long time.