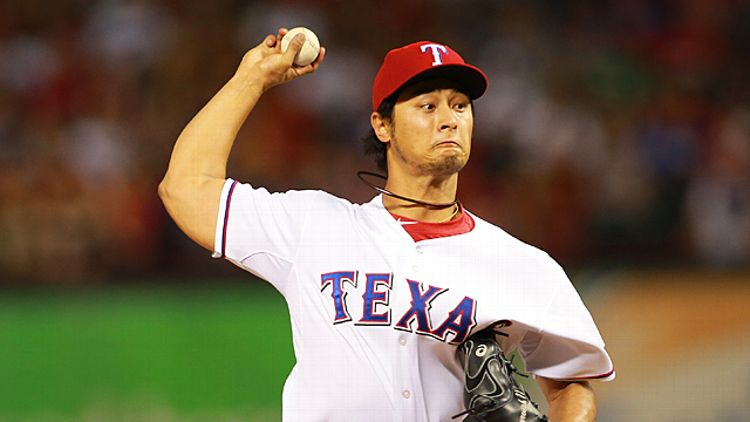 Here we are, another Friday. Another week without accomplishing our dreams. Unless your dream is watching baseball games on May 3–5, 2013, in which case I am your guardian angel, lifting you by the underarms and carrying you to self-actualization. Here are the top 10 things happening this weekend in American stickball.

10. I’ve Got a Feeling About This Mariners Offense (SEA-TOR)

Has an article about baseball ever approximated the thrill of watching a 10-car pileup quite like Jonah Keri’s piece on the Mariners? It was the best. Here’s one extra kick to the teeth for Mariners fans: Last year, your team had the worst offense at home by almost every conceivable stat. On the road? You were eighth. So while your team still stinks, there’s at least a remote chance that it’s some psychological byproduct of playing at one of the worst hitters’ parks in the country. In a parallel universe where Safeco is a bandbox, the Mariners maybe won the World Series last year. So … you’re welcome?

Quick math shows that the series with the lowest combined win totals this weekend is Marlins-Phillies, with 21 big Ws. If you are a real fan, you will watch Jose Fernandez take on Cole Hamels on Saturday at 7:05 p.m. EDT, and you will weep quietly for three hours, with quick, emphatic sobs when Ryan Howard strikes out, Ben Revere grounds into a double play, or Juan Pierre appears on your television screen.

I looked at San Francisco on a map the other day and was very disappointed to see how far south the city was within California. For some reason, I thought you could basically get there by taking a leisurely bike ride across the Oregon border on a nice day. Can you tell I’m from the East Coast? Instead, it turns out that the real northern California is full of trees and (I’m assuming) hippies. As a native of New York’s Adirondack Mountains, I can relate to this. Everybody thinks New York stops at Albany, but guess what, gang — there’s some fucking mountains to cross before you get to Canada. Three hours of them. Chew on that. But people have the gall to call Westchester County “upstate.” Which is why I’m calling Dodgers-Giants the “SoCal Slugfest.” Maybe San Francisco isn’t exactly in the south, but I’m striking a blow for the northerners who never get their due. Time for a token baseball tidbit: Kershaw vs. Zito on Friday night should be fun.

The Burn-Dog, as I imagine and hope his teammates call him, is batting .591 with four home runs over the past week. That’s good, but is it good enough to get you to watch an actual game between the Twins and Indians? Well, let’s just say this: On a scale of “Just Catch the Highlights” to some other category, it doesn’t matter what the other category is, because you should just catch the highlights.

I have no idea why I just typed “sensual” in relation to the NL Central. There’s nothing even remotely sensual about these two teams. Was it because the words sound vaguely familiar? Am I going crazy? Did I save this entry until last and am I know struggling to say anything at all about a token matchup between two pretty good teams in baseball’s most boring division? MAYBE. You all go to hell. I need to get my life together. I’m Neil Diamond!

Did you know that according to Pitch F/X, A.J. Burnett is the only man in baseball who throws a knuckle curve? This was a pitch my friends and I all tried to master when we were young, along with the straight knuckleball. The result, at its most successful, was a pitch without spin that also had zero movement, and was bashed well over the fence by the kid from the redneck town who was 6-foot-3 and bearded at age 11. Which is sort of how I imagine Burnett was at that age. I’m glad he’s found success with the knuckle curve. Also of note in this series is Stephen Strasburg, who is starting on Saturday after experiencing some forearm issues. People need to remember that the Nationals are still the same franchise as the Montreal Expos; as last year’s playoff heartbreak proved, they are still cursed. And nothing says curse like Strasburg going down with a hideous injury after you sat him a year earlier to avoid that exact outcome.

God, I love watching Matt Moore pitch. The dude’s fastball and two-seamer cut away from righties more than any other pitcher in the league, while his slider just drops and actually breaks slightly toward them — but not enough to be obvious. He fools everybody. With a 1.13 ERA, a 5-0 record, and more than 10 strikeouts per nine innings, he’s a bright spot for a Rays team that has underachieved so far this season. They’ll have a chance to reverse things at Coors Field against the surprising Rockies, who are 17-11 and leading the NL West.

3. Harvey vs. Hudson for the King of the Letter H (Sunday, NYM-ATL)

There’s a quote attributed to Jerry Seinfeld (possibly apocryphal, the only reference I found was on this message board) about choosing between the Yankees and Mets: “It depends if you have a personality or if you need a personality. If you have one, you’re a Mets fan. If you need one, then you’re a Yankees fan.” Sounds like somebody hates winners, am I right? Anyway, Mets fans finally have something to cheer about this year in Matt Harvey, the young fireballer who’s compiled a 4-0 record to go along with a 1.56 ERA. The 24-year-old has allowed just seven runs in six starts, and on Sunday he’ll take on Tim Hudson and the division-leading Braves in the second-best pitching matchup of the week. Harvey is one of those Strasburg types who has a ton of success with his changeup because he throws his fastball so hard — both pitches are top 10 in the league in pitch value, while his fastball is the fourth-fastest in MLB — and he’s got a decent slider and curve to boot. Check him out Sunday to get a glimpse of the Great Met Hope.

IF THE SEASON ENDED TODAY … the Yankees would earn one of the AL wild-card berths, and … well, Detroit would get the other. Crap. Narrative foiled. But Oakland would only trail them by percentage points, and what I’m trying to say is that Yankee Stadium will host two teams who are very good at baseball this weekend. The A’s are their usual plucky selves, while the Yanks, at 17-10, are surprising some people with their resilience in the face of injuries. As you might have seen, the team’s DL has the 15th-highest payroll in baseball, but still the spirited boys from the Bronx play on, winning ballgames and winning hearts. There’s just something about that ole Yankee pride that you can’t help but like, you know? Hey, maybe I’m crazy, but it feels like winning is in their blood. How can you not root for that? Also, for the record, Robinson Cano is your father.

Man, if you guys haven’t seen these GIFs of Yu Darvish and Justin Verlander, you are in for a treat.

That’s overlaid footage of Darvish striking people out with five different pitches, all from the same release point. (You can also see the same thing for Verlander here.) That, of course, is evidence that he’s a master at disguising his pitches. There’s no way for anyone to know what’s coming, and that’s at least part of the reason why Darvish leads the majors with 13.5 strikeouts per nine innings. On Sunday he takes on Jon Lester, who’s having a nice year of his own at 4-0. Unlike the Yanks-A’s wild-card shenanigans, these teams are top dog in their respective divisions, and whoever wins this series will have a solid claim as the best team in the American League.