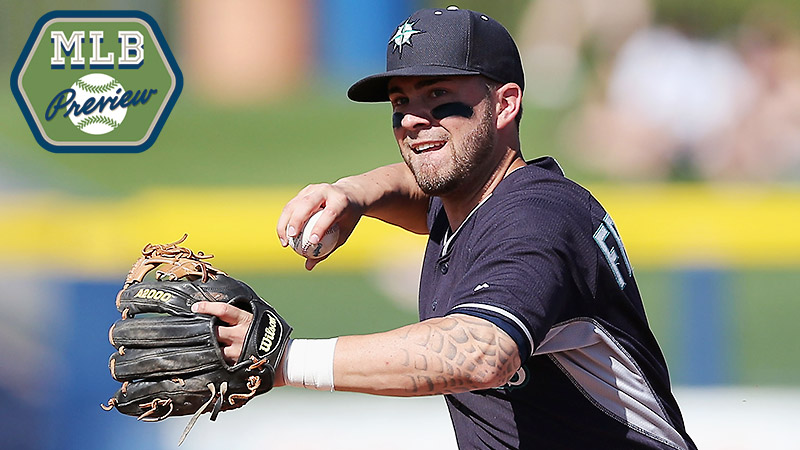 For all the moves baseball teams have made this offseason, the most surprising might be the move one team hasn’t made: Nick Franklin remains Seattle Mariners property, tethered to the same franchise with which he ended last season.

It’s not entirely clear why this should be so. Franklin was the Mariners’ primary second baseman as a rookie last year, but as you might have heard, the team spent close to a quarter-billion dollars to lure Robinson Cano, the best second baseman in the game, to Seattle. Franklin could play shortstop, the position at which he was drafted and primarily played in the minor leagues, except the Mariners also broke in a rookie at short last year in Brad Miller, and Miller was better both offensively and defensively than Franklin. The Mariners could try Franklin at third base, except that Kyle Seager has established himself as one of the up-and-coming stars at the position.

Trying to find a use for a 23-year-old middle infielder who has already proven himself capable of playing every day in the major leagues is a good problem for the Mariners to have. But it’s still a problem.

The one solution that seems untenable is for the Mariners to simply let Franklin wither on the vine, either by consigning him to a return trip to the minor leagues or by letting him languish on the bench. The Mariners may not need Franklin, but some team does. Indeed, his superfluousness in Seattle ought to make Franklin an extremely enticing acquisition candidate. It’s not every day that a young, cost-controlled player at a key defensive position becomes available on the trade market.

A player’s true skill level becomes evident more quickly when we look at his power and plate discipline. In 102 games last year, Franklin popped 12 homers and 20 doubles; he also walked 42 times. He was above average in each category — above average for all hitters, and well above average for a middle infielder. Franklin hasn’t received nearly the attention he deserves for his skill set. Middle infielders this young aren’t supposed to have offensive games this diverse.

They’re not supposed to because they don’t, generally speaking. Here’s a list of every 22-year-old middle infielder in major league history who batted at least 250 times with an isolated power of at least .140 and a walk rate of at least 9 percent.

Just 10 other middle infielders have blended power and plate discipline at such a young age, and just two in the last 48 years. That alone is a testament to Franklin’s skill set, and the potential he has to be a front-line player for many years to come. Every other hitter on this list except Rickie Weeks (who’s entering his 11th year) played at least 13 seasons in the majors. Everyone except Weeks and Alex Gonzalez amassed more than 24 career bWAR. Three are in the Hall of Fame.

This particular skill set — middle infielders with power and plate discipline — is an incredibly underrated one, so it’s no surprise the above list contains some of the most underrated players in baseball history. Arky Vaughan, one of the five best shortstops ever, has a case for being the most underrated player of all time, while Dick McAuliffe isn’t far behind. Jim Fregosi is mainly remembered today for being the guy the Mets traded Nolan Ryan to get; what’s forgotten is that they were willing to give up Ryan (and three other players!) for him because Fregosi was one of the best players of the 1960s, a six-time All-Star who received MVP votes in eight seasons.

Franklin isn’t likely to scale those heights as a player, but he deserves to be more than an afterthought in the Mariners’ plans. He was a first-round pick in 2009 and broke out as a prospect the following year when he roped 23 homers in the Midwest League as a 19-year-old. Baseball Prospectus ranked him as the sport’s no. 44 prospect the following spring. Franklin never showed quite that much power again in the minors, but he worked his way up the ranks at a very young age, reaching Double-A at age 20 and Triple-A at age 21. He was again a top-100 prospect last spring after hitting .278/.347/.453 in the minors in 2012, and needed only a month in Triple-A last year to prove he had nothing left to learn there, hitting .324/.440/.472 with more walks (30) than strikeouts (20).

The knock on Franklin is that his glove is a bit short to play at shortstop, which may be true, but no one doubts he has the defensive chops to play second base. The other knock is that while he’s a switch-hitter, he’s a much better hitter from the left side. This is also true: He’s hit right-handed pitching better than left-handed pitching every year in the minors since 2010, and in the majors his OPS against southpaws (599) was 128 points lower than his OPS against right-handers (727). But that weakness is also a strength: While Franklin may always struggle against left-handers, that means his overall numbers actually undersell his ability to hit right-handers, who happen to throw 70 percent of the innings in the majors.

So what we have here is a switch-hitter with power, walks, and the ability to play a mediocre shortstop or a very good second base. Among contemporary players, Franklin is reminiscent of nothing so much as a Ben Zobrist starter kit. Zobrist didn’t actually reach the majors until he was 25 and didn’t stick until he was 27, after retooling his swing. He’s never hit .300, and he’s only topped .280 once in his career. But over the last five years Zobrist has averaged 18 homers, 86 walks, and 17 steals a season while playing a terrific second base and showing the versatility to play all over the field. That combination of skills has been worth 32.3 bWAR over the last five years, more than anyone in baseball other than Cano and Miguel Cabrera.

Like Franklin, Zobrist was primarily a shortstop in the minor leagues but moved across the keystone in the majors. Zobrist then became the heretofore-unseen second baseman/right fielder hybrid, playing 50 games at both positions in 2009, 2010, and 2012, a combination no other player has managed even once in the last century. Well, guess what? Franklin is taking some reps in right field while the Mariners try to figure out what to do with him.

What they should do is trade him if they’re not going to play him every day, and wouldn’t you know it, the Rays are one of the teams most interested in his services, nearly consummating a trade before an injury screwed up the deal. The Mariners are reportedly looking for a right-handed thumper to balance their lefty-leaning lineup, although considering they’re opening the season with Erasmo Ramirez as their no. 2 starter while Taijuan Walker and Hisashi Iwakuma mend, a starting pitcher would also seem to make some sense. For a club that won 71 games last year, the Mariners seem awfully interested in going for it this season, and their urgency to win now should create a golden opportunity for some team to pick up Franklin on the cheap.

That team hasn’t materialized yet. Even after making two trades, the Tigers have a desperate need for a shortstop, but may not feel that Franklin can handle the job defensively (and more importantly, may not have the talent needed to deal for him). The Mets have shown interest, as have the Orioles. The Cubs, who have Jeff Samardzija to deal, may be dark horses, as may the Royals, given that the Mariners have lusted after Billy Butler for years.

Wherever Franklin goes, it will probably be to a team savvy enough to recognize that, his poor rookie batting average notwithstanding, he’s an underrated star in the making. A Franklin trade later this season could very well tip the balance of the pennant race in favor of his new team — not just for this season, but for seasons to come.