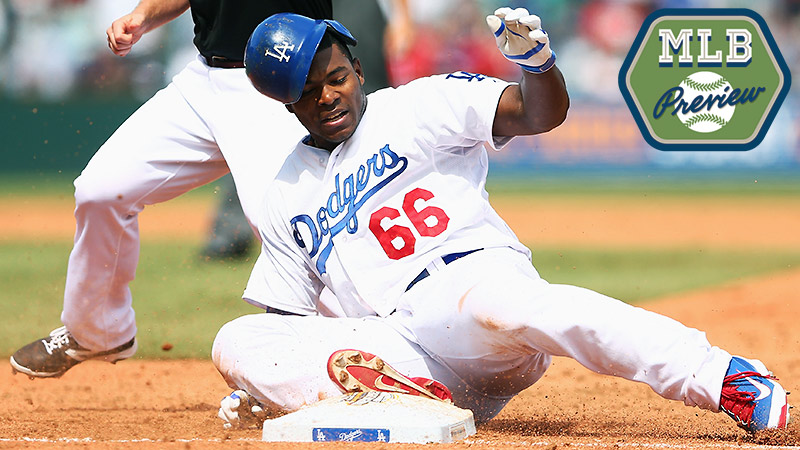 What’s that? You were wondering exactly how many days remain until the start of the MLB season? Well, you’re in luck! We at the Triangle have spent spring training giving you a daily reason to get excited about baseball’s return, which sort of happened last week in Australia, and will kind of happen again when the Dodgers and Padres play on Sunday night, but will really, truly happen on Monday, which is proper Opening Day.

If you, like me, are the kind of damaged person who spends the summer channel surfing on MLB.TV looking for the most excitement, which players guide your decisions? Whose at-bats are can’t-miss moments? Which pitchers demand your focus every fifth day? Since I joined Grantland a year ago, I’ve spent more time on these questions than any others.

Excellence, because you’d rather watch good players than bad ones. Excitement, because while Adrian Beltre and Joey Votto are both great players, Beltre’s defensive ability comes through on TV better than Votto’s discerning batting eye. And Entropy, because baseball is an extremely rigid sport, both in form and culture, making the unexpected and chaotic elements particularly refreshing.

So with the Three E’s in mind, here’s a look at this year’s All-MLB.TV first and second teams.

Perez might be the best player nobody’s head of. He turns 24 in May, is entering what amounts to his third full major league season in terms of total games played, and is one of the best offensive catchers in the game. Among active catchers with at least as many career plate appearances as Perez, only Buster Posey has a higher batting average, and only Posey, Brian McCann, and Carlos Santana (who’s gradually moving away from the position) have a higher OPS+. With most of this generation’s great catchers either getting old or moving to other positions, Posey and Yadier Molina have pretty much lapped the field. Perez isn’t quite at their level yet, but he could be soon, and his bat puts him first in my book among the position’s young and promising.

Second team: Buster Posey, San Francisco Giants. He’s the best overall catcher in the game, he’s one of the most athletic, and he was my pick for first-team catcher last year. I considered going with Molina here, but I asked Posey, and he said he ain’t havin’ it.

First basemen are kind of necessarily big and slow and uninteresting. Goldy, however, bucks that trend with jaw-dropping raw power and a fleet-footedness (37 career stolen bases, including an 18-for-21 mark in 2012) that belies the fact that he’s the largest mountain in Arizona.

Second team: Eric Hosmer, Kansas City Royals. Like Goldschmidt, Hosmer is a good two-way player and a surprisingly adept base stealer for his size. The difference is that Hosmer delivers more line drives, while Goldy comes through with more parabolic home runs. Hosmer is the Salvador Dalí of neck beards, though, which wins him some points.

It seems like Altuve’s been around forever, but he’s still only 23. He has actually become bizarrely overrated thanks to his size (5-foot-5, 175 pounds). He steals bases (though not at a high success rate) and delivers a relatively high batting average (but doesn’t walk or hit for power), so while Altuve exhibits an exciting style, he’s not really a great all-around second baseman. Still, watching someone that small play baseball is hilarious.

Second team: Jason Kipnis, Cleveland Indians. I’ve already covered Kipnis, so I won’t rehash everything that makes him excellent. But I will say he should enjoy occupying this spot while it lasts, because there’s a decent chance Jurickson Profar will soon be on this list every year until 2020.

Simmons is this year’s winner of the Harold Melvin & the Blue Notes Award, because if you don’t know him by now, you will never, never, never know him.

Second team: Jean Segura, Milwaukee Brewers. Segura’s an exciting, if not Simmonsian, defender who ran the bases backward last year. He might not ever again be as good as he was in the first half of 2013, but if a player runs the wrong way on the bases, he becomes must-see MLB.TV. Shortstop is a crowded position, so if you’re a fan of Everth Cabrera, Jose Reyes, or Elvis Andrus, know that leaving them out brought me no joy.

Beltre has been the sport’s most exciting third baseman in each of the past 10 seasons, and when all is said and done, he may be one of the top five ever to play the position. In terms of his contemporaries, imagine Beltre as a hybrid of peak Scott Rolen’s defense, Vladimir Guerrero’s ability to hit home runs off pitches that bounce, and Derek Jeter’s flair for the dramatic. Plus, if the BBWAA gave out an award for best on-field bromance, Beltre and Andrus would be that award’s Daniel Day-Lewis.

Second team: Manny Machado, Baltimore Orioles. There will come a day when I grow tired of gushing about Mini Keg, but that day probably won’t come until it stops being interesting to watch a very good defensive shortstop (who, by the by, also hit 50-plus doubles last year) play third base. It’d be like if they sent Peyton Manning back to college.

Harper has elite raw power and an elite haircut, and he plays baseball with a pathological self-confidence and a near-homicidal anger. As good as he had to be to make two All-Star teams by his 21st birthday, he can still get better. I think he’ll win NL MVP and Washington will win the World Series this year. I’m all in.

Second team: Yoenis Cespedes, Oakland A’s. Last year’s first-team left fielder might have missed the cut if Domonic Brown had kept up his midseason hot streak or Jonny Gomes hadn’t crossed the Rubicon that divides “colorful” and “annoying.” This is a big year for Cespedes, since he took a step back after a superb rookie season, and since Oakland’s crowded outfield means the team could let him walk after 2015.

A disproportionate number of baseball’s exciting plays hinge on speed, and Hamilton has more of that than anyone else in the game. I have no idea how good he’ll actually be this season, but I wouldn’t be shocked if he tries to steal second literally every time he reaches base and doesn’t have anyone blocking him. He’s so unusual that in addition to just being exciting to watch, he brings a curiosity factor to which nobody else on this list can lay claim.

Lists like these are made for players like Puig, who blows away what’s actually an extremely exciting crop of right fielders. The best baseball is often at odds with the most entertaining baseball, and the most appropriate way to describe Puig is to say that he plays in a way that makes it seem like he’s more interested in being exciting than good. That’s not a knock on him at all, because he was one of the best all-around right fielders in the game last year anyway.

Second team: Hunter Pence, San Francisco Giants. I personally hate watching Pence, but there’s an undeniable beauty to a guy who plays like he’s had baseball described to him, but has never actually seen a game. It’s like watching a lion ride a unicycle. Other acceptable nominees: The Mighty Giancarlo Stanton, Jason Heyward, Shane Victorino, and Wil Myers.

Take Yu Darvish’s power breaking stuff, combine it with Puig’s excitability, and you get Fernandez. Last year, Fernandez stared too long at his first career home run, which incited a benches-clearing stand-around-home-plate incident, which in turn inspired my favorite photo of the season, a beautiful tableau that caused SB Nation’s Grant Brisbee to call Fernandez “the Mike Trout of don’t-give-a-shit face.” One of the best pitchers in the league hasn’t seen the humanity ground out of him yet, and we need to cherish it while we still can.

Second team: Yu Darvish, Texas Rangers. Darvish may have the best stuff of any starter in the game. He’s not as good of a pitcher as Clayton Kershaw (because nobody is), but he’s more exciting to watch. He’s also a very handsome man, it should be said.

On the one hand, Kimbrel isn’t that exciting, because the outcome is never in doubt when he takes the mound. On the other hand, there’s a little stumpy man in Atlanta who makes hitters guess between an upper-90s fastball and an upper-80s knuckle-curve that burrows into the dirt like a frightened groundhog. And even if the hitter guesses right, he probably won’t be able to hit either pitch.

Second team: Sean Doolittle, Oakland A’s. Doolittle is like a left-handed Kenley Jansen: a failed position player whose organization one day told him to throw a fastball over and over until someone learned to hit it. So far, nobody has. Doolittle is also reportedly working on a slider and a changeup for this season, so while the narrative might not be as good in six months, the results could get even better.