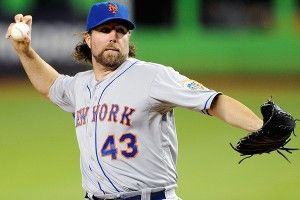 The series of tubes are still buzzing over Sergio Romo’s parade-stopping T-shirt, and already we’ve got reams of Hot Stove news to sort through. Here are some of the biggest happenings from the past week:

As expected, the ‘Ropolitans exercised their options on R.A. Dickey and David Wright. What happens next will carry far more intrigue.

Coming off a Cy Young–caliber season, Dickey’s a bargain for 2013 at $5 million. The knuckleballing Renaissance man tossed 233⅔ innings in 2012, posting a 2.73 ERA with a 3.27 FIP and a strikeout-to-walk rate of better than 4-to-1. The question now becomes, how far do you go with a 38-year-old pitcher? Phil Niekro and Hoyt Wilhelm pitched brilliantly well into their 40s, and Dickey’s ’12 season rivals some of the top knuckleball pitchers’ best efforts. If the knuckler truly puts minimal stress on an arm, and given that Dickey’s been throwing it for less than a decade and might still be perfecting it … would a two-year contract make sense? Three? We’re working with a tiny sample of precedents here, leaving the Mets — and Dickey — with something of an educated guess to make. Ripping up Dickey’s option year and signing him to a three-year contract at $7-8 million per year might make sense for all sides. But again … uncharted waters, especially with baseball’s national TV deal about to double in value, teams swimming in cash, and high-quality pitching at a premium.

David Wright, of course, will be the much tougher sign. The All-Star third baseman posted one of the best seasons of his career at age 29, with a .376 wOBA and Gold Glove–caliber defense. Of course, that came just a year after an injury-plagued season in which Wright put up the worst numbers of his career. Then there’s the matter of cost. The Mets are reportedly talking to Wright about a contract extension, too, with Wright only secured on a $16 million option for one more year. We don’t know the exact figures, but the bidding will surely start well north of $100 million on a five- or six-year commitment given some of the other monster deals handed out this year. Wright is a much younger, much more marketable player than Dickey, which is precisely why the Mets would do well to keep their options open for now. There’s a whiff of a sleeper team here, with Dickey, Jon Niese, and Matt Harvey heading a talented rotation and top prospect Zach Wheeler poised to join them. The Mets would be far better off with Wright than without for 2013. But adding two or three quality young players to a quality pitching staff with multiple years of team control left could prove an enticing option.

WHAT WOULD SHIELDS YIELD?

While Dickey and Wright can hit the free-agent market after next season without a contract extension, the Rays own James Shields’s rights for two more years. If, say, the Yankees or Rangers owned a pitcher of his caliber (six straight seasons of 200-plus innings, an average of 4.6 Wins Above Replacement over the past two years), there’d be no thought given to moving Shields given the highly affordable $10.25 million he’s due to make in 2013 and the $12 million-plus he’s owed for 2014. But this is the Rays, a team that annually operates on one of baseball’s smallest payrolls and rakes in one of its healthiest profit margins, thus casting the fate of every high-earning player on the roster into doubt.

Less cynically, the Rays own more starting pitching depth than any other team, with Shields, David Price, Matt Moore, Jeremy Hellickson, Alex Cobb, and Chris Archer all vying for rotation spots, Jeff Niemann rehabbing, and even Wade Davis available if the Rays opted to convert him back to starting. The Rays predictably picked up Shields’s option for next season. But acquiring him for about two years, $22 million (give or take a couple million depending on incentives) would be a far more attractive proposition for any pitching-needy team than paying five times as much for Zack Greinke or breaking the bank for the likes of Kyle Lohse. With major lineup holes at first base, DH, and one outfield spot (and maybe more), flipping Shields for a big bat, or possibly even two or three young position players, might work out best for everyone. It’s just a matter of whether they can land something approaching the Matt Garza trade.

For some perspective on what Shields’s market value might be, consider the case of Ervin Santana. The soon-to-be-30-year-old right-hander led the majors in 2012 with 39 home runs allowed. He posted his lowest strikeout rate in six years, with the lowest fastball velocity of his entire career. His 5.16 ERA was fifth-worst in the majors, while his 5.63 FIP was dead last among all qualified starters. Overloaded with big contracts, the Angels would have owed him $13 million next year.

The Royals took the bait anyway, acquiring Santana for 27-year-old left-hander Brandon Sisk. For Kansas City, it’s a gamble that Santana can return to 2011 form, when he posted a 3.38 ERA, 4.00 FIP, and produced nearly three Wins Above Replacement — making him worth the $13 million given the recent going rate for free agents of $5 million per win and the possibility of higher valuations this winter. Only seven teams fared worse than KC’s 4.30 ERA in 2012, and the Royals’ 20th-place showing in FIP (4.18) wasn’t much better. Focus on the starters (and not the solid bullpen) and the situation looks much worse. Luke Hochevar’s a bust as a former no. 1 overall pick now just trying to make it to league average, Bruce Chen and Luis Mendoza are journeyman placeholders, and Chris Volstad, KC’s first notable offseason pickup, somehow managed a 6.31 ERA this year. The Royals have to hope next-generation starters like Mike Montgomery can develop as hoped, and that rehab cases like Danny Duffy can return to full strength when they make it back sometime in 2013. But for now, the guy who gave up 39 homers last season is probably the new staff ace.

• The White Sox have to be happy after re-signing Jake Peavy to a two-year, $29 million deal with a club option for 2015. An above-average starter his entire career (he even won the NL Cy Young five years ago for the Padres), Peavy’s problem had always been staying healthy. But the 31-year-old righty pitched a full season for the first time since that Cy Young campaign, tossing 219 innings with a close to 4-to-1 K:BB rate, 3.37 ERA, and 3.73 FIP, despite playing in what might be the American League’s friendliest park for home run hitters. If we assume something close to $5 million (or more) per win as the going rate for free agents, the White Sox are ostensibly banking on Peavy being a three-WAR pitcher; he managed that total in 2011 despite throwing just 111⅔ innings. If Peavy misses a few starts or pulls back from 2012 levels, there’s a good chance this deal still works out reasonably well. If he manages to duplicate his 2012 production, this would be one of the biggest steals of the offseason.

• While the White Sox were busy locking down a near-elite starter for $29 million, the Dodgers paid $22.5 million (over three years) to re-sign Brandon League. That’s Brandon League, a righty relief pitcher with a severe platoon split (.590 career OPS vs. RH, .765 vs. LH), who walked nearly a batter every other inning in 2012 and has posted below-average strikeout rates for three years running. You’d think all the Fernando Rodney–type scrap heap stories would convince teams not to drastically overspend for pedestrian relievers. You’d also think other teams might be concerned that at this pace, salaries across the game will skyrocket for everyone from legitimate star players to bit parts. But this is the Dodgers, a team that combines hyperaggressive owners with a general manager who very recently figured that a three-year contract at similar money for Juan Uribe would be a swell idea. Reckless and shortsighted isn’t a formula likely to be copied by other clubs.

• Rafael Soriano opted out of his $14 million option with the Yankees and is now seeking a four-year contract. Soriano returned to form in 2012, striking out more than a batter an inning, seamlessly assuming the closer role in New York for the injured Mariano Rivera and erasing memories of an underachieving, injury-prone 2011. Still, Soriano turns 33 next month, ceded a ton of line drives last season, and also, he’s a relief pitcher. If you want to test a possible Dodgers effect on free agents this offseason, Soriano could be your best test case.