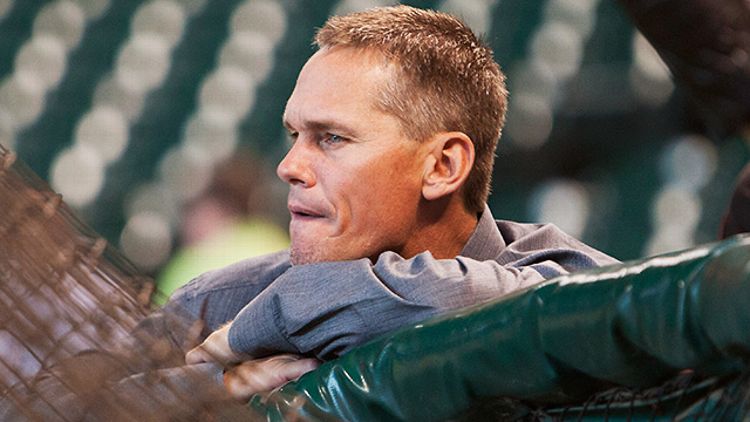 Three players will be inducted into the MLB Hall of Fame this summer, as voters elected Greg Maddux, Tom Glavine, and Frank Thomas on Wednesday. But the first three-man class in 15 years was partly overshadowed by Craig Biggio’s nearest of misses, which revived cries of frustration from Hall watchers.

Let’s start with the good news: the induction of three strong first-time candidates.

Brian Curtis explores what baseball writers were up to in the steroid era.

There was no reasonable defense for spurning Maddux on this year’s ballot, and Mad Dog received 555 votes from the 571 submitted ballots, good for a 97.2 percent rate that falls just short of Tom Seaver’s 98.8 percent mark for the highest of all time. Last month I examined Maddux’s historic peak, a two-year stretch (1994-95) smack in the middle of the PED era in which he posted an obscene 1.60 ERA. There’s a fun debate to be had about where Maddux ranks among the best pitchers of all time. Jay Jaffe’s JAWS system, which combines career and peak value, places Maddux 10th. I’d put him closer to the top five, behind the likes of Roger Clemens, Cy Young, and Walter Johnson, but in the same zip code as Seaver, Lefty Grove, Christy Mathewson, and other legends. Those who believe in awarding bonus points for pitching in a high-offense era and who think players from the pre-integration (and pre-scouting!) era shouldn’t get as much credit as they often do might argue that Maddux and Clemens are the two best pitchers of all time.

Glavine was Maddux’s teammate for 10 seasons, and they were the two driving forces behind the Braves’ dynasty of the ‘90s and early aughts. (More importantly, they were co-stars in one of the greatest commercials of all time.) Glavine wasn’t anywhere near Maddux’s class, but that’s OK. The most determined “small Hall” voters, who think Cooperstown is the dominion of Ruth, Mays, Aaron, and few others, have constructed a fantasy that doesn’t match reality. Glavine’s career fits comfortably alongside Hall of Famers like Fergie Jenkins, Juan Marichal, and Don Drysdale. A curmudgeon could argue that Glavine garnering 91.9 percent of the vote while equally or even more deserving candidates like Curt Schilling and Mike Mussina came nowhere close is a product of the Braves teams on which Glavine played, as well as his ability to nudge beyond 300 wins at the end of his career. But the Hall doesn’t parse relative worthiness beyond a simple yea or nay vote. Glavine’s on his way to Cooperstown, and he earned it.

Meanwhile, here’s what I wrote about Thomas last month:

Bagwell and Thomas were born on the same day and have long been compared. Thomas’s career path was pretty different, of course, with more games played at DH than at first base, and none of the non-hitting skills that Bagwell possessed. But man, could the Big Hurt mash. Using wRC+, a stat that takes a hitter’s offensive contributions and adjusts them for park and league effects, Thomas rates as the 21st-best hitter of all time, in a virtual dead heat with Willie Mays and Hank Greenberg. Thomas’s best season was downright Bondsian, only without the Bonds drama: .353/.487/.729, numbers that, on an adjusted basis, were only ever topped by Bonds, Ruth, Williams, Hornsby, Mantle, Gehrig, and Cobb. It wasn’t easy to put up numbers that stood out at a time in baseball history when 30-homer second basemen seemed a dime a dozen, but Thomas did.

Voters were obviously similarly bullish, tabbing the Big Hurt on 83.7 percent of ballots. In some ways I’m a bit surprised by that vote count, given what Thomas was: a preposterously big and strong slugger who played from 1990 through 2008, covering the duration of the high-offense era that came to be linked to performance-enhancing drugs. The book on Thomas was that he was huge even as a rookie, having starred as a tight end as well as a first baseman at Auburn. He also spoke out against steroid use before most other players did. In voters’ eyes, those factors combined with Thomas’s video-game numbers to make him a first-ballot lock.

Now, for Biggio. In some ways, getting agitated over Biggio means overlooking the positives that came out of this round of Hall of Fame voting. A year ago, no living soul was inducted — not a player on the Hall of Fame ballot, not an old-timer elected by the Pre-Integration Committee. The shutout was a big money-loser for the Hall, which relies on induction weekends to generate a big chunk of its annual revenue, and a black mark for the Baseball Writers’ Association of America’s voting members. (Full disclosure: I became a BBWAA member last month, but you need 10 years in the organization to earn a Hall vote.) The failure to elect a single deserving player signaled how flawed the system had become. Electing three first-time players and inducting Bobby Cox, Tony La Russa, and Joe Torre via Expansion Era committee vote means that Cooperstown gets to host a huge party this summer, which should make a lot of baseball fans very happy.

Still, seeing so many great players fall short of Hall glory leaves a bad taste in many fans’ mouths, and Biggio is the current poster boy for that frustration. The 20-year veteran appeared on 427 ballots, netting 74.8 percent of votes. That means he missed induction by two votes, tying for the dubious honor of the nearest miss in Hall of Fame history.

We can reconcile this two-vote shortfall in multiple ways. First, there are the highly visible anger-generating ballots. MLB.com writer Ken Gurnick’s ballot, which contained Jack Morris and no one else, has received a massive amount of criticism; I don’t agree with Gurnick’s decision, but I do understand his rationale for not being sure about anyone in the PED era. On the other hand, the notion that Morris, who pitched from 1977 to 1994, didn’t spend many years playing alongside juiced players is ludicrous — and that’s not to mention the multiple Morris contemporaries who deserved to be honored, including teammates Alan Trammell and the already passed-over Lou Whitaker. Former New York Times writer Murray Chass’s accusation that Biggio was a juicer and thus didn’t warrant Hall consideration likewise garnered lots of attention, but Chass has been accusing players on the basis of suspect evidence for years now. If Gurnick and Chass (or one of those two plus the anonymous voter who submitted a blank ballot this year) simply opted not to vote as a way to protest PED use in baseball, Biggio would’ve earned the necessary 75 percent.

Then again, it was entirely possible to compare Biggio’s career numbers to the rest of this year’s overcrowded field and conclude that he was not one of the 10 best candidates. I know this, because I did it last month on my mock ballot. At least five voters have come forward, either in columns or on social media, to say that they voted for Biggio last year, but dropped him this year because they saw 10 better candidates. As former BBWAA president Bill Shaikin noted, 50 percent of voters filled out all 10 spots on their ballot this year, up from 22 percent last year. That means there’s a very good chance they might’ve seen more than 10 worthy candidates in the 2014 class. Biggio wasn’t in Maddux’s class as a player. Depending on your metric of choice, you might argue that he trails Thomas and Glavine in career value, too. He certainly didn’t benefit from the same team-based halo effect that propped up Glavine’s vote count. But Biggio, like Glavine, hit a big Hall milestone (in his case, 3,000 hits), and he’d warrant induction even without that round number.

The combination of that surge in full ballots and Biggio falling short by such a painfully small margin means we might soon see a change to the 10-vote limit. Eliminating that cap certainly wouldn’t solve all of the electorate’s problems; not when voters are submitting protest ballots featuring one or zero players, or after three voters picked Biggio last year but not this year despite having open slots on their ballots. But for an organization as set in its ways as the BBWAA is, baby steps matter.

Biggio will most likely get in next year. Dropping Maddux, Glavine, Thomas, and Morris (who just spent his 15th and final year on the ballot) opens up a tiny bit of daylight, especially since only three Class of 2015 candidates figure to get in: Randy Johnson, Pedro Martinez, and John Smoltz. Throw in the voters who’ll back Biggio as result of how close he just came, and the potential repeal of the 10-limit rule, and he should make it in with room to spare.

That leads to the final angle to watch: Pushing Biggio’s election back a year figures to affect other holdover candidates. Even if the 10-limit rule disappears, certain voters will always confine their votes. Biggio staying on an extra year means that Tim Raines will struggle to regain traction after dropping to 46.1 percent this year from 52.2 percent. A vote for Biggio might mean no vote for Jeff Bagwell, or Mike Piazza, or Edgar Martinez, or Trammell, or Schilling, or Mussina, or all of the above from an underrepresented era. If we kicked Ruth, Mays, Cobb, Aaron, and Koufax out of the Hall, then put them on next year’s ballot, I bet certain voters would only pick four of the five, or leave off Pedro or the Big Unit if they did vote for all five. Some voters simply self-enforce this kind of cap.

And so, the passel of nuanced Hall candidates will just have to sit and wait. After Pedro, Unit, and Smoltz, the next eligible players will be Ken Griffey Jr. and Jim Edmonds. Then Pudge Rodriguez, Vladimir Guerrero, Jorge Posada, and Manny Ramirez. Then Chipper Jones, Jim Thome, Scott Rolen, Andruw Jones, and Omar Vizquel. Roy Halladay comes up the year after that. Derek Jeter will probably retire soon. Voters’ tendency to pass the buck on deserving candidates has given us this giant headache, and it’s going to be nearly impossible to fix, even if the limit on votes per ballot lifts.

I’ve long felt that the BBWAA would take care of business sooner or later, and that even though it’d be unfortunate to make these players wait as long as someone like Bert Blyleven did, at least they’d eventually get the recognition they deserved.

I’m not so sure anymore. Short of dropping the required share of the vote well below 75 percent, I think there’s a good chance that the voters’ failure to elect candidates who not only match but raise the bar on existing inductees has put us in an intractable position. That position will leave many obviously worthy players at the mercy of the Expansion Era Committee, or whatever the veterans committees will be called 10 or 12 years from now. And not to be overly dramatic about it, but there’s a reasonable chance that some of those players will either never make it in or be dead by the time they do, the way Ron Santo was when he got his long-overdue induction.

And that’s terrible. For all the talk about writers weighing in on PED use and defining standards and arguing over the number of players for whom they can vote, the players, and the fans who want to see their heroes honored, are the ones being shafted.

Craig Biggio should be in the Hall of Fame. So should Tim Raines. A river of red tape and bullshit is preventing that from happening, and it’s a damn shame.