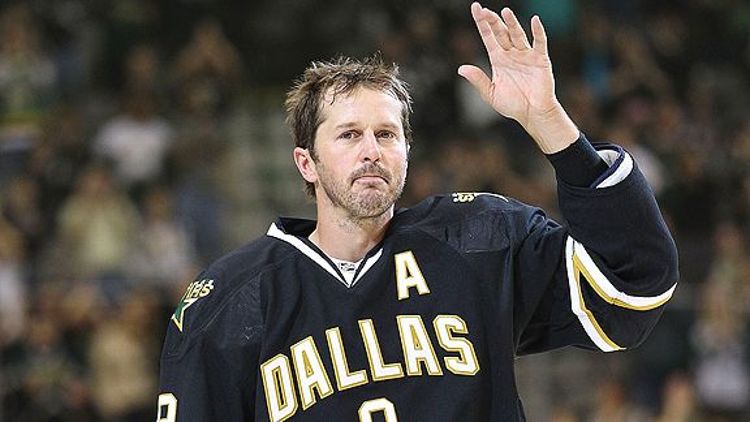 When the gloriously mulleted and barely 18 years old Mike Modano was drafted no. 1 overall by the Minnesota North Stars in the 1988 NHL Draft, he was so nervous that he stood on stage clutching his new no. 9 jersey in his, as he described them, “clammy and sweaty” hands.

“Put your sweater on!” he was quickly exorted. “Be proud, kid!”

He did, gladly, though that North Stars jersey would not be around for too long. In 1993, two years after the North Stars reached the Stanley Cup Finals with the help of young Modano’s 20 playoff points, the team was relocated to Dallas as part of the NHL’s push to move hockey beyond the sport’s traditional hotbeds.

North Stars owner Norman Green later recalled that he was encouraged to make the move to Dallas by “the only Texan I knew: Roger Staubach.” This was apt, both because of Dallas’ status as a football-first city and because Modano, the Stars’ biggest star, was the closest hockey had to an archetypal All-American quarterback.

“I do think it’s fitting that there’s a collection of 40-year-old women screaming next door,” joked Dallas Stars play-by-play announcer Ralph Strangis at the start of Modano’s retirement ceremony Friday, which ended the once playboy player’s 21 seasons in the NHL. Modano, a surefire Hall of Famer, had signed a ceremonial one-day contract with Dallas that listed a value of $999,999 — a tribute to his jersey number, which will certainly be retired — to ensure that he could retire as a Star, an appropriate end to perhaps the most influential career in American hockey.

Modano was part of a golden era of American hockey in his day, his career overlapping with other U.S. greats like Brian Leetch, Mike Richter, Chris Chelios, John LeClair, Jeremy Roenick, and Pat LaFontaine, among many others. He was part of the 1996 World Cup of Hockey team that won a gold medal, and he suited up for three different U.S. Olympic squads. But what separated Modano from the rest of his cohort was the fact that he played — and won a Stanley Cup, however controversial — in a town that had scarcely even seen ice before the Stars took to it.

The move from hockey-obsessed Minnesota to a city like Dallas was a culture shock for the former North Stars. Modano recalls that “it was like Hockey 101” and that early on, the Dallas PA announcers would make note any time a whistle was blown for offsides or icing. But the Michigan-born Modano happily took on a huge marketing role. (It didn’t hurt that he was handsome and single.) Along the way, he tried his hand as a model and had a few cameos as an actor — a few lines in the 90s-tastic D2: The Mighty Ducks here, a few more in a professional wrestling intro sketch for Curt Hennig there.

Wayne Gretzky is the one who is most often labelled with the words “hockey ambassador,” but Modano was nearly as great of a statesman. The similarities to The Great One didn’t end there. Just as Gretzky’s half-tucked-in jersey would become his sartorial trademark, Modano’s loose and oversized sweater — puffed up with air as he power-turned, billowing behind him like a superhero cape or an American flag as he blazed down the ice — is one of hockey’s more enduring images. And while Gretzky remains the game’s leading scorer, Modano has more points than any other American player.

Modano’s career had its share of bumps, bruises, and personal setbacks. He was the recipient of an ugly hit by Mark Messier that led to him being dropped while getting loaded into an ambulance on a stretcher. He nearly had his neck broken by Ruslan Salei. After winning the Cup in 1999 he came under fire for his lackadaisical play at the start of the following season, perhaps after a little too much celebration (“F——— kid had the f——— time of his f——— life,” teammate Brett Hull explained to Sports Illustrated) and even his eventual breakout performance later that season, and the teams’ repeat trip to the Stanley Cup Finals, was marred by a broken engagement to then-girlfriend Kerri Nelson.

He was burned by a unscrupulous money manager who cost him millions in 2004. And this past year, when he tried to eke out one more season wearing a Detroit Red Wings jersey that, despite being his hometown team, just didn’t feel right, he suffered a freak injury — a skate blade that severed a tendon in his wrist — that effectively silenced the last gasp of his career. Thanking his erstwhile hockeyblogging wife, Willa Ford (whom he called “Mandy” in his farewell press conference, which made me worried that he had mixed up his tweenyboppers until I realized that her real name is Amanda) he lamented only that he wished she could have seen him play when he “was 28, 27.”

“I was in elementary school!” she yelled.

But his waning years will be remembered far less than his overall impact on hockey in Texas, and hockey in general. Dallas has long been cited as a role model for their grassroots work in growing the sport locally. A recent cover story in The Hockey News about the boom in American hockey notes that in 1997, the team helped start a youth hockey circuit that grew “from four teams to 20 in one season and now counts 70 squads,” and the United States of Hockey blog notes that during Modano’s time in Dallas, the number of registered hockey players in Texas grew from 868 in the whole state of Texas to 11,661 by last year.

And it’s safe to say that a good number of them sought to wear no. 9 in tribute to Modano. That’s not something that’s limited to Texans, either: burgeoning American star Bobby Ryan, who grew up far from Texas and is part of a new generation of American players who may well overshadow the mid-90s-era group, took to Twitter to salute the player who was one of his own role models.

“Congrats to Mike Modano on a great career!” he wrote. “The reason I picked number 9! What an awesome player, thanks for showing young Americans the way!”