Mike Matheny’s Record Will Be a Product Of Talent, Luck & Definitely Not Mike Matheny 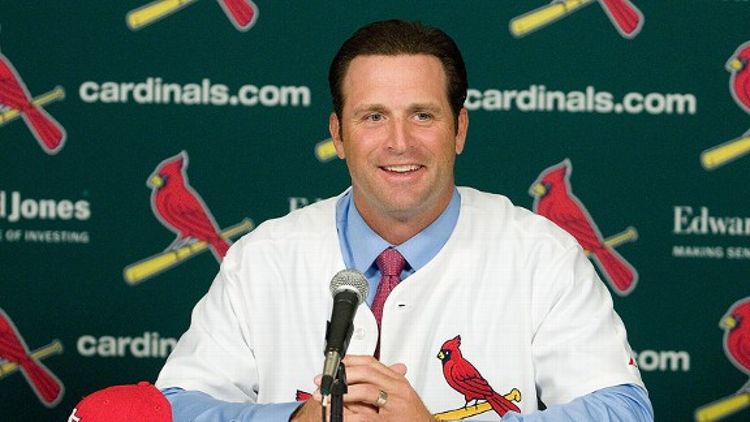 The St. Louis Cardinals won two World Series under Tony La Russa. Only two managers ever won more games than La Russa. At the time of his retirement, La Russa’s 16 years with the Cardinals was the longest-running tenure for any manager with any team. Whatever one thought about La Russa’s personality or tactics as a manager, one thing was clear: The Cardinals believed in continuity, and TLR rewarded them for that belief.

Naturally, when the time came to replace La Russa, the Cardinals locked in on one candidate: Mike Matheny, the choice with exactly zero full-time managing or coaching experience, at any level.

Matheny’s hire might lead you to think the Cardinals are taking a huge risk by tapping a new skipper whose entire post-playing career experience with the Cardinals boiled down to a special adviser role for two weeks in spring training three years ago. But we’ve seen this before. Elias notes that five other first-time managers have taken over a defending World Series champion: Bill Carrigan (1913 Red Sox), Jack Barry (1917 Red Sox), and Bill Virdon (1972 Pirates), along with two Cardinals skippers, Bob O’Farrell (1927 Cardinals) and Red Schoendienst (1965 Cardinals).

Go back through baseball history, and you’ll find numerous other cases of zero-experience managers. In some instances, they failed spectacularly. In others, they succeeded.

About a month ago, Robin Ventura was hired by the White Sox with just scant coaching experience and no managing experience, but the best example we can judge also ranks as one of the worst. A.J. Hinch served four years in the Diamondbacks front office, the last three as director of player development. After Arizona’s slow start in 2009, Hinch got booted downstairs to manage the team. From May of that year until July 2010, the Diamondbacks compiled a brutal 89-123 record, despite fielding a nucleus that included several impressive, young players. When Kirk Gibson guided Arizona to the NL West title a year later, skeptics could have seen that success as a final affirmation of Hinch’s failures as skipper — though the Diamondbacks’ inability to build a functional bullpen, and some key players being a year or two away from breaking out, probably sealed Hinch’s fate more than anything.

Perhaps even odder than a move from front office to manager are the times teams looked to the broadcast booth to find their next skipper. After eight years calling games for the Padres, Jerry Coleman found his way into the manager’s chair in 1980. Granted just that one year at the helm, Coleman guided the Padres to a 73-89 record — no big surprise given how lousy the team had been a year earlier, when it actually won five fewer games. Larry Dierker was a color commentator for the Astros for 18 seasons before gaining the manager’s job in 1997. He enjoyed tremendous success, winning four division titles in five seasons (though with four first-round playoff exits). This, too, wasn’t a surprise, given a dynamic core that included future Hall of Famers Jeff Bagwell and Craig Biggio, and other stars.

Finally, we have a now-extinct brand of field general, the player-manager. Three of the most recent examples met with mixed results themselves. Frank Robinson became the Indians’ player-manager in 1975, then went on to finish three games below .500 over the ensuing three seasons (he saw better results later in his managerial career). Joe Torre took over as Mets player-manager in May 1977 (even though he played his final game earlier that month). Pete Rose compiled a solid 412-373 record as taking over as player-manager of the Reds in August 1984, though he’s best remembered for getting banned from baseball on charges that he gambled on his own team.

The common denominator here is, simply, talent level. Studies in the book Baseball Between the Numbers and elsewhere show that the vast majority of managers don’t make much of a difference to their teams one way or another over the long haul. Even in small-sample, high-pressure moments such as playoff games, their mistakes can lead to baseball miracles.

There are multiple reasons that may have driven the Cardinals to hire Matheny. There’s a long-standing belief within the game that catchers make great managers due to their supposed leadership and game-calling skills … even though we’ve yet to see compelling evidence that ex-catchers make significantly better managers than ex-second basemen or ex-rodeo clowns. Perhaps this was simply a case of Cardinals GM John Mozeliak going with the guy he liked the most, especially after a strong interview. Or maybe there’s a tiny chance that Albert Pujols might be persuaded to stay in St. Louis rather than leave via free agency, in part because his old teammate Matheny will be calling the shots, not some unknown outsider … though money will surely play a bigger role in the decision.

Ultimately, we have no way of knowing how this experiment might go, because Matheny offers no track record on which to peg our predictions. If you insist on reading the tea leaves, try this: If Pujols stays in St. Louis and remains a superstar throughout the bulk of his next contract; if Adam Wainwright returns to full strength after Tommy John surgery; if the Cardinals young bullpen, Shelby Miller, and other next-generation pieces come through, the Cardinals will probably look like geniuses. If they don’t, they probably won’t.

This might seem an unsatisfying answer to an elemental question. But to quote one very successful, very polarizing skipper, that’s the way baseball go.

ESPN Stats and Info contributed copious research to this post.

Dan Duquette Has His Hands Full In Baltimore
Here’s Why Jonathan Papelbon Isn’t Worth $50 Million
Team Continuity Strikes Again with the Minnesota Twins
Cleveland Indians, Worms’ No. 1 Enemy
Polarizing Trade For Two Deep Sleepers
Five Tips To Get The Cubs On Track
Canadian Sports Anchor’s Kent Brockman Moment
Farewell, Frank: Dodger Faithful Have Reason to Rejoice
Are the Cardinals the Most Unlikely Champions of All Time?