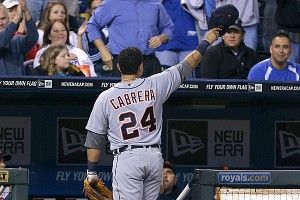 Miguel Cabrera did not sneak onto the throne. He could have sat out Game 162 and saved himself the risk of undercutting his AL-topping numbers: .330 average, which led the MLB, 44 home runs, and 139 RBIs. With the AL Central title locked up, manager Jim Leyland said the decision to start against the Kansas City Royals was entirely up to Cabrera. Last night, as Cabrera got up to bat, the first Triple Crown of the century was hanging in the balance.

He went 0-for-2. With a tip of his hat, he left in the fourth inning to a standing ovation in Kansas City. When Cabrera’s achievement became official in the sixth inning of a game the Tigers would win, 1-0, Kansas City emblazoned their screen with a message: “Congratulations from the Royals and our fans.” The game paused for fans to stand and cheer him once more.

The Triple Crown honor roll dates back to 1878, and includes Mickey Mantle, Lou Gehrig, fellow Tigers player Ty Cobb, and Ted Williams, who won it twice. The title hasn’t been touched in 45 years. It is no coincidence that Triple Crowns became far less common after baseball integrated, raising the league’s talent average. Aside from Cabrera, only two of the winners are still alive. Since Carl Yastrzemski last won it in 1967, baseball’s pitching mound has been lowered. There are more games in a season, more teams in the league, and a little something called free agency. It is not easy to come out on top not only in one hitting category, but three. And for Cabrera, playing at home in Comerica Park, the home-run fence is unnervingly far: 420 feet at center field.

Cabrera doesn’t fit the mold set by the 14 others who won the Triple Crown. He is the first American immigrant to win it. He’s the first Latino. He’s active in Santeria and Catholicism. Not only did Cabrera’s father play professional ball in Venezuela, but his mother played on the national softball team. Cabrera doesn’t speak English very well. His shying away from news media and his soft-spoken manner, broken only by his sheer giddy delight during a game well-played, has made it easier for his extraordinary effort to be overlooked. (That, and the fact that his triumph came on the night of the first presidential debate of 2012.) Said Leyland before the last game: “I doubt very much, knowing him, that he necessarily enjoys all the extra attention, and all the extra conversations he has to have, it’s kind of out of his realm in personality, to be honest with you.”

More ignobly, Cabrera’s Triple Crown comes in the wake of his public and disturbing struggle with alcohol. Three years ago to the day of his Triple Crown triumph, police were called to Cabrera’s Michigan residence and brought him in for questioning. He showed up at Comerica Park the next day with scratches on his face that he claimed were from a dog. In fact, they were from a fight with his wife. In January 2010, Cabrera sought treatment for alcoholism. During spring training last year, he was caught driving drunk in Florida, resulting in his no contest plea in court this past January. Cabrera received probation, a suspended license, $1,400 in fines, and a mandate to attend DUI school and a victim-impact panel. He was partnered with Raul Gonzalez, formerly of the Mets, in the MLB’s sponsorship program to support athletes with alcohol addiction.

In the ballpark, Cabrera’s fielding is not, shall we say, impressive. It’s his first year back at third base since 2008, after moving from first to make room for Prince Fielder. His base running is meh. As Jonah Keri pointed out, Cabrera’s offensive season is his worst in three years, going by batting average, on-base percentage, and slugging average; Cabrera’s 2010 numbers topped his 2012 numbers, though his home runs and RBIs are his best ever. Cabrera also has the lowest OPS+ for any winner of the Triple Crown.

Despite a middling start to the season, the Tigers roster provided crucial support for his success. And Cabrera happens to have the lucky advantage of a subdued offensive season in baseball, with the exception of the extraordinary batting average of rookie Mike Trout of the Angels, and the home run streak by Josh Hamilton, who finished with 43. Former Tigers teammate Curtis Granderson threatened to de-throne Cabrera when he hit his 43rd home run Wednesday night. But, when Granderson came up again in the lineup, the Yankees offered what may have been an unexpectedly magnanimous gesture: with the win all but confirmed — the Yankees beat the Red Sox 14-2 — they sent in a pinch hitter for Granderson’s next at-bat.

In 2012, Cabrera got it together. He showed up. He lost weight, got (somewhat) faster, and looked healthier than ever. In his delighted goofing off with Prince Fielder in the dugout, he looked happy. He hit. Boy, did he hit. Not only is he the first player since 1967 to win the Triple Crown, but no player has so much as entered the final week of the season with a chance of winning it. Miggy has been on fire since he came into the game at age 20, and, nine years later, he looks to be on a sure path to the Hall of Fame.

But who cares? That’s later. This is today. Cabrera’s ability to hit with power, to hit consistently, and to come up to bat in Game 162 when he was invited to opt out and take the Triple Crown while sitting on the bench: This is what inspires. This is fun.

Schrödinger's Refs: A Halfhearted Audit of the 2011 NFL Officials