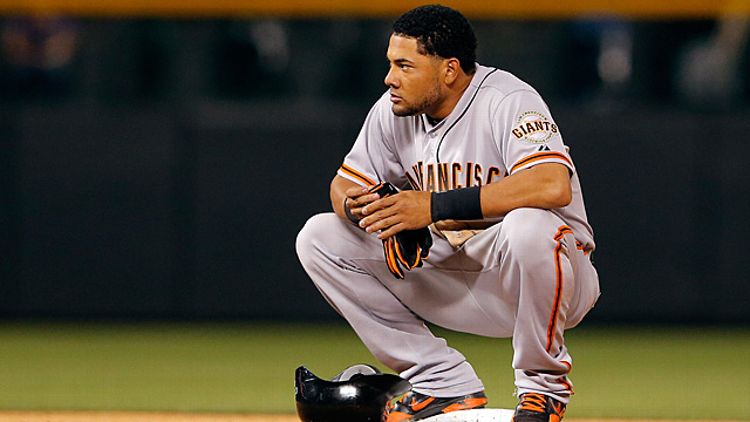 Major League Baseball suspended Giants outfielder Melky Cabrera for 50 games after he tested positive for excessive levels of testosterone, wiping out the rest of his season and dealing a blow to San Francisco’s playoff hopes.

The notion that Cabrera could have a major impact on a pennant race would have seemed ludicrous as recently as two years ago. At that point in his career, Cabrera had reached double-digit home runs in a season just once. Hell, he’d slugged .400 or better just once. He was a popgun hitter who provided moderate value when his bloops and grounders would find holes, next to zero value when they didn’t.

Then he went nuts. After signing with the Royals in December 2010, Cabrera enjoyed the best season of his career, hitting .305/.339/.470. He set career highs in batting average, slugging average, hits (201), doubles (44), and homers (18), as well as runs scored, runs batted in, stolen bases, and virtually any advanced stat you can imagine. Traded to the Giants last offseason for Jonathan Sanchez, Cabrera was a hit machine from day one, racking up 12 of ’em in his first seven games. In 113 games this season, he hit .346/.390/.516. He ranks second in the National League in batting average, first in hits (159), first in runs scored (84), and 11th in Wins Above Replacement (4.5). Also, he was named Most Valuable Player at the All-Star Game. On the plus side, Sanchez did offer a decent return, posting a sparkling 8.07 ERA so far this year and now playing for another team.

The Giants almost certainly won’t see any more of Cabrera for the rest of this season. San Francisco has just 44 games left in its regular season, and the odds of the Giants getting to the NLCS and Cabrera somehow playing his way back into shape without the benefit of minor league rehab are slim. That leaves the Giants with lefty-swinging Gregor Blanco getting the bulk of the playing time in left field, backed up by righty-swinging Xavier Nady. After a torrid first couple months, Blanco’s dropped back to career norms, and is now hitting .236/.341/.336. He walks a lot, steals bases, and plays great defense, as Matt Cain can tell you. Nady, signed to a minor league deal August 4, was once a decent threat against left-handed pitching (career .791 OPS vs. LH, .741 vs. RH), but he’s now 33 years old and near the end of his career. A little back-of-the-napkin math suggests that Cabrera might’ve netted one or two wins over your standard backup. If Bruce Bochy plays matchups well and catches a few breaks, the drop from Cabrera to Blanco and Nady might cost the team closer to one win than two.

There are alternatives. Alfonso Soriano has cleared waivers and can be traded to any team. Soriano’s due $18 million in 2013 and 2014, which no doubt scared teams away. But CBS’s Jon Heyman reports that the Cubs might be willing to pay all but $3 million a year for the right return. At 36, Soriano’s not the hitter he used to be, but he’s still clubbed 21 homers this season, compiling a line of .263/.320/.488. With Pablo Sandoval back off the DL, Hunter Pence in tow, and Buster Posey in full MVP-push mode, the offense is in better shape than it’s been in a while. But seeking reinforcements when your .346 hitter bites the dust isn’t a bad idea.

As for Cabrera, the suspension torpedoes his market value just as he was about to hit the biggest payday of his life. Cabrera got called up by the Yankees in 2005 as a 20-year-old. You’d expect a player that young (who’s not Mike Trout) to struggle with such early major league exposure. You might also expect a performance spike when a player hits his mid-to-late 20s, like the one Cabrera had. The performance jump of the past two years might seem big, even accounting for typical aging curves. But it’s also a bit of a leap to attribute all of his newfound success to PED use. Cabrera did hit for more pop in the past two seasons, but not in an extreme Brady Anderson way (.164 and .170 Isolated Power in 2011 and 2012, compared to .130 for his career). He did hit a few more line drives, but the uptick was fairly small (20.3 percent and 21.8 percent line-drive rates in 2011 and 2012, vs. 19.7 for his career).

Cabrera owed a huge chunk of his newfound success to massive jumps in his batting average on balls in play: .288 in 2009 and 2010, then .332 in 2011, and a sky-high .379 in 2012 (fifth-highest in the majors). It’s possible that Cabrera leveraged newfound bat speed into harder-hit balls and thus more hits, in a way that eyeballing line-drive rate wouldn’t fully convey. But it’s also possible that Cabrera’s big breakout has more to do with organic improvement as a hitter and random variance on balls in play than any nefarious PED-generated benefits. As I wrote about last offseason’s Ryan Braun saga, there’s evidence to suggest that certain substances can enhance physical traits, which might figure to improve athletic performance. But we’re never going to get a proper double-blind randomized clinical trial, because the real world won’t allow 100 players to take steroids, 100 more to get placebos, and let the chips fall where they may.

All of which is to say, if a player violates the rules of baseball the way Cabrera did, he’s due for a suspension. But stating with authority that player X improved Y percent because he took substance Z is just spending too long on the Jump to Conclusions mat. And it’s entirely possible that the team willing to put up with Cabrera’s newfound PED stigma and take a chance on his performance ends up with a bargain. In the meantime, the Giants just lost the All-Star Game MVP, and they’ll likely face a stiff NL West challenge from the recently fortified Dodgers, and maybe even the third-place Diamondbacks. The rest can be debated by the legions of MDs with intimate knowledge of Melky Cabrera’s anatomy who’ve magically sprung up overnight.

We Were Just Starting to Miss Russell Westbrook and James Harden