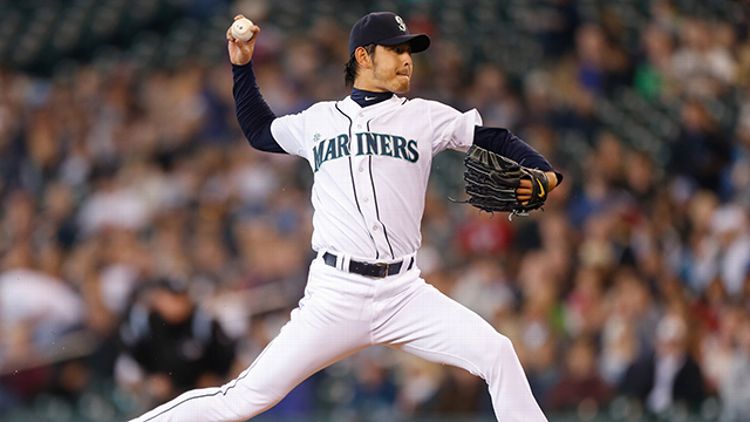 With a few exceptions, the best free agents of the past offseason have also been some of the cheapest. As more and more teams re-up their best players before they can reach free agency, mastering the art of shrewd shopping becomes more important, whether your payroll tops $200 million or is one-third that size. Granting that we’re only eight weeks into the season, it could be instructive to run through the most successful free-agent pickups of the Hot Stove, and see if we can pick out any traits and patterns common to the best of the bunch.

Here are those top snags, going position by position.

C — Russell Martin, Pirates, two years, $17 million, .256/.344/.466
There were plenty of reasons for the Yankees to pass on re-signing Martin. First and foremost, he hit .211 in 2012, albeit with power. The Yanks had two catchers with excellent receiving skills ready to take his place. They also seemed determined to hold the line on salaries in an attempt to duck under the $189 million luxury-tax threshold for 2014 — even though they now seem likely to go over that number anyway.

Either way, the Yankees’ loss has been the Pirates’ gain. Though figuring out a catcher’s exact defensive worth remains a challenge, at the very least we can say that the 30-year-old Martin isn’t one of the worst pitch-framers in the game. Here’s what we do know: He’s been hitting, posting a .211 Isolated Power number that’s a career best. There are those who would argue that Martin, like fellow former Yankee A.J. Burnett, has seen a career renaissance largely because he’s shifted from the tough AL East to the easier-to-navigate NL Central. Whether or not that theory has merit, the Pirates suddenly find themselves with their most productive offensive catcher since Jason Kendall’s heyday (at least for now). If he keeps it up, that two-year, $17 million deal will look like a steal.

1B — James Loney, Rays, one year, $2 million, .335/.398/.494
He’s cooled off some after a blazing-hot start. But the Rays still seem to have unearthed another first-base bargain, following their successful Dumpster dive for Casey Kotchman in 2011. In both cases, the Rays targeted a late-20s player a few years removed from a strong season — Kotchman’s .296/.372/.467 in 2007, and Loney’s .331/.381/.538 that same year (albeit in just 96 games). Even after his recent regression, Loney’s still sitting on a .360 batting average on balls in play, way above his .307 career mark. But he’s also posting the second-highest walk rate of his career, and hitting for more power than he ever has. Like Martin, Loney fits the age profile of a player still in his prime years, even if recent performance suggested otherwise. With advanced defensive numbers backing his reputation as one of the best defensive first basemen in the league, Loney’s been well worth his relatively tiny salary.

2B — Kelly Johnson, Rays, one year, $2.45 million, .296/.358/.570
Already on fire in the month of May, Johnson had a monster game against the Marlins on Monday. He blasted two homers, knocked in six runs, and even stole a base during ball four of an intentional walk. Signed as an apparent afterthought just days before the start of spring training, Johnson has responded by putting up bigger numbers than any other second baseman. In typical Rays fashion, they’ve recognized Johnson’s strengths and hid his weaknesses well, giving him occasional days off against tough lefties and spotting him in left field at times, while making sure to pull him for late-inning defensive replacements. At age 31, Johnson was three years removed from his last big season, a .284/.370/.496 slugfest with the D-backs that netted him more than five Wins Above Replacement. So far, it looks like he’s got plenty left in the tank.

SS — Blank
No great buys to speak of, though Didi Gregorius should claim this spot even as a rookie and a trade pickup rather than a free-agent move, if only for how dumb he’s made me and other doubters look so far.

3B — Eric Chavez, Diamondbacks, one year, $3 million, .325/.368/.588
We covered Chavez’s newfound durability and late-career burst last week. Even with a new diet and new training habits, we can’t know how long this is going to last. Even if Chavez keeps hitting, he faces the prospect of hitting the bench soon; with starting second baseman Aaron Hill on the mend and Martin Prado likely to shift back to third base when Hill returns, that would leave Chavez without a job. But if all the Diamondbacks get from their investment are 300 strong at-bats, that would still be well worth it.

OF — Nate McLouth, Orioles, one year, $2 million, .289/.372/.434
Given that McLouth hadn’t posted respectable numbers for three years, he didn’t seem likely to duplicate the .268/.342/.435 he managed down the stretch with Baltimore in 2012. Turns out he hasn’t — he’s been even better this year, slashing his strikeout rate to career-low levels, even stealing 15 bases by Memorial Day. At 31, McLouth fits the bargain profile, with a diversified enough skill set to be valuable to the O’s even if he hits a slump here or there.

OF — Nate Schierholtz, Cubs, one year, $2.25 million, .288/.320/.496
Here’s another case of a solid player being used perfectly, to the benefit of his employer. Schierholtz has been platooned, avoiding most left-handers and reaping the benefits. An above-average fielder and base runner, he’s putting up career-best power numbers at age 29. He’s not a building block for this rebuilding Cubs team the way Anthony Rizzo and Starlin Castro are. But for a team that wants to hold the line on salaries until it’s ready to compete, Schierholtz is a fine asset to have around. He’d make a great part-time player for a contender, too, making him an intriguing little trade chip at some point in the next few weeks.

OF — Nick Swisher, Indians, four years, $56 million, .273/.370/.497
Successful bottom-fishing teams can and do get books written about them when they hit the dollar-store jackpot. But there’s no shame in spending real money to acquire real talent. The Indians did just that over the winter, landing Swisher and Michael Bourn for more than $100 million combined, and nabbing Mark Reynolds on a one-year, $6 million deal. Bourn’s been hurt, while Reynolds has been another steal, hitting .259/.342/.512 and just missing this list behind Loney at first and Chavez at third. Swisher’s played most of his games at first, but we’ll cheat here, because he’s hit better than any other free-agent outfielder. One of the most consistent hitters in the game (wRC+ from 2006 through 2012: 124, 122, 93, 125, 135, 124, 128, making that ’08 season look like a huge outlier), Swisher’s a good bet to keep doing what he’s doing.

DH — Travis Hafner, Yankees, one year, $2 million, .260/.381/.512
We’ve already sung the praises of Hafner and the Yankees: The player’s raked from the start, while the team’s riding high despite missing half its roster. The oldest position player on this list and one of the most injury-prone, it’s tough to say how long this will last. But the numbers to date, while up from what he’s done in recent seasons, still look reasonable when he’s at full health, especially in a ballpark that offers a short right-field porch that suits his lefty swing perfectly. Ultimately the Yankees just needed Hafner, Vernon Wells, and other stand-ins to hold their own until the cavalry showed up in the form of DL returns for Mark Teixeira, Kevin Youkilis, Curtis Granderson, Derek Jeter, and others. Granderson did get hurt again, Jeter figures to be out a while longer, and other question marks remain. But if Hafner never played another game after today, he’d have already earned his $2 million, and then some.

Iwakuma has a chance to beat both of them. His .220 batting average on balls in play (league average is about 70 points higher) and 85.4 percent strand rate (league average is in the low 70s) suggest some regression’s on the way. But there’s legitimate skill here, too. Through 11 starts, he owns the third-best strikeout-to-walk rate in baseball. He’s dominated with two different pitches, flashing a top-10 fastball and the game’s best splitter. The Mariners own a $7 million club option on Iwakuma’s 2015 season. At this rate, that’s a mortal lock for both player and team.

RP — Jason Grilli, Pirates, two years, $6.75 million, 1.19 ERA, 0.87 FIP
The category-buster. Older than anyone on this list at 36, with a long track record of mediocrity, you wouldn’t think the Mariano Rivera–like numbers would last. But his more recent efforts do suggest that kind of excellence, with sky-high strikeout rates for the third year in a row, and Grilli ramping up his velocity to career-high levels. The home run rate of 0.00 is an anomaly, and the .244 BABIP might be too. But whether it’s being freed to throw harder in shorter spurts, or some other kind of progression, we now have enough evidence to suggest that he’s probably for real. Grilled cheese for everyone.