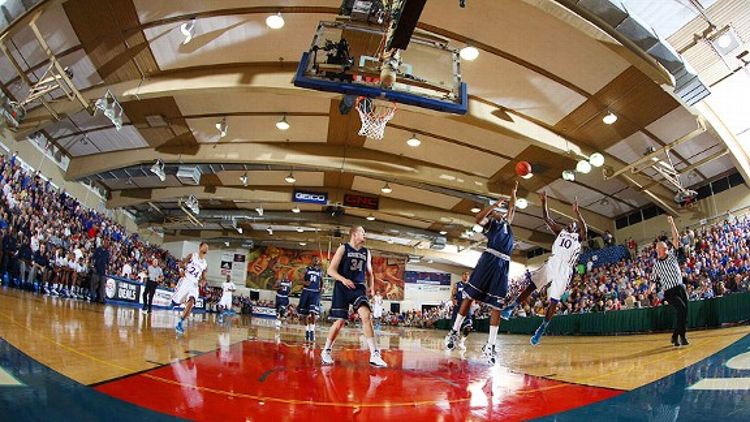 I realize A Triumph of Discipline sounds like a propaganda film from a particularly unsavory totalitarian regime. Luckily, what happened in Maui yesterday was a little less sinister. In essence, three of the four quarterfinal games involved a team with a defined system defeating a team with a looser style of play. Let’s start with the opener.

Fair warning: I love charts. I love charts as much as any man in America except Dr. Hezeniah Chart, the first man to ever make a chart (it was about how many fish could fit in a bathtub — weird dude). Below, from our amigos at Statsheet, is the Four Factors chart from the game:

The four factors, according to a lot of great statistical minds like Dean Oliver and Ken Pomeroy, are the most important elements of success in any basketball game. The obvious conclusion to draw from the chart above is that Michigan won because its shots fell at a higher rate. And broadly, that’s true. Neither team turned it over very often, both rebounded at a similar rate, and Memphis actually made it to the line with more frequency. But the real story of the game was the ascendancy of a particular style. Memphis began the game in hyper jackrabbit style, trying to overwhelm Michigan with fast breaks, pressure defense, and quick shots. It looked like it was working, at least for a while; Michigan was tired, and only a decent shooting performance kept them level.

Then, late in the first half, Wolverines coach John Beilein began to realize that running might be all Memphis had. Gone was the incredible effective field goal percentage from the Tigers’ win over Belmont, and gone was the proficiency out of a halfcourt set. So Beilein adjusted. Where Michigan had tried to keep up the pace early on, at least to some degree, now they bunkered down. Tim Hardaway Jr. and freshman Trey Burke took the shot clock under ten seconds on most possessions. On defense, they threw in some 1-3-1 zone to give the Tigers a different look, and it left them blustered. The sheer athleticism of Joe Jackson and Will Barton, along with the opportunistic shooting from Charles Carmouche, suddenly vanished.

Memphis hit just eight field goals in the second half. Barton scored his last points with 15 minutes remaining. Jackson had just three points in the second half. Memphis essentially plays with a four-guard offense, and Michigan’s defense stifled them on the perimeter. Almost every three was contested; the Tigers’ final total was 4-20 from beyond the arc. Finally, they were reduced to attacking the lane, and though it produced some trips to the line, the strategy was never going to generate enough offense.

Especially with the stellar efforts from the Michigan guards. Burke is quickly becoming the most pleasant freshman surprise in the country, and Hardaway’s workmanlike 21 points were at least a little reminiscent of his dad. The bigs did their job, fight the rebound battle to a draw, and the Michigan defensive system pressure and slow offensive pace prevailed. In the final 23 minutes, the Wolverines outscored their opponent 46-30.

As with Michigan’s victory, the name of Duke’s game was perimeter defense. Tennessee came in with three players- Trae Golden, Cameron Tatum, and Jordan McRae- capable of lighting it up from three. So it really says something about the Duke defense that combined, those same players only attempted three deep shots. The Volunteers hit a combined 26 three-pointers in their first three games. Last night, they were 0-8.

The other heroes of the game were Austin Rivers and Mason Plumlee. Rivers, the freshman shooting guard, had his best game of the season. His drives were more controlled, he showed the ability to avoid the charge and find the open player in the lane, and he re-discovered his touch from three-point range. As for the much-maligned Plumlee, he was excellent as the tallest man on the floor, grabbing 13 rebounds, finding open outlet men to jumpstart fast breaks, and excelling at shot selection (3-5 from the floor). Duke fans, used to lacking an elite big man, often point to Brian Zoubek as a paragon of unselfish post play. In his senior season, Zoubek was a key ingredient in the 2010 national championship run, but it wasn’t necessarily evident in the box score. Ditto for Plumlee last night; he only scored eight points, but his reliability inside freed up scoring opportunities for everyone else. If he stays on the Zoubekian path, Duke might actually deserve its high ranking.

Well, at least the Bruins are back on track. With the blowout against the Division II Silverswords, they finally have a crooked number in the win column. Reeves Nelson, who was suspended for a game earlier this year and missed the team flight to Hawaii, only played eleven minutes and didn’t start. Tonight against Kansas, it’ll be interesting to see if he’s been released from Ben Howland’s dog house.

I want everyone to know I dutifully stayed up for this game, which ended after 2 a.m. eastern time. It was an odd one, mostly because Kansas looked like the far superior team. But the Jayhawks were never up to the task of hammering the nail in the coffin, and Georgetown was always within victory range until the final seconds. Seven of Kansas’ 12 turnovers came in the second half, which somewhat accounted for Georgetown’s resilience, but a look at the four factors shows the impact of the Jayhawk who made the difference- 6’9″ junior forward Thomas Robinson.

See the Kansas superiority in field goal percentage? Robinson was 7-14 from the field.

See the rebounding disparity? Robinson grabbed 12 on his own, more than double the total of any Georgetown player.

See the foul shots? Robinson made more free throws (6) than anyone else attempted.

The big man, with his strength and aggression, was just a bit too much to handle. Without him, Georgetown might have had an easy upset on its hands. With the pressure on at the end, though, it was Travis Releford who stepped up for Kansas. With Kansas leading by three with 2:41 on the clock, Releford snagged an offensive board off a Robinson miss and finished the put-back to keep his team up five. A minute later, with the margin back to three, he came up with a big steal that lead to an easy layup. And after Jason Clark’s three brought it back to two points with 30 seconds left, he got to the line and iced the game with two huge free throws. After Georgetown missed a desperation three, he dove for a loose ball and called timeout, ending the Hoya hopes for good. It was about as solid a clutch performance as we’ve seen in college basketball so far this season.

Even with a lineup full of upperclassmen, Kansas is very much a work in progress. This was a big win against a team that will probably end up in the top 25 before long, though, and it sets the Jayhawks up nicely in a semifinal with UCLA.

Speaking of which, here are the quick previews for today’s games:

Both teams fell victim to the discipline and pressure of their first round opponents, but they’ll find more freedom in the losers’ bracket. Expect a fun, high-scoring game that Tennessee can only win if the guards shake off the Duke nightmare and light it up. Otherwise, the Barton brothers and Joe Jackson will be more than the Vols can handle.

Georgetown will win, by a lot, possibly setting up a very interesting fifth-place game between the Hoyas and Memphis.

This is going to be fantastic. For anyone who remembers the intensity and drama of the second-round NCAA game these teams played last March, the anticipation will be high. The game will be decided on several key fronts.

John Beilein is one of the more intelligent coaches in the game, and what he lacks in talent he’ll try to make up in tactical dexterity. Expect Michigan to play slow on offense, hoping to limit Duke’s fast break points and attacks. It’s imperative for Duke to control the defensive glass and keep Michigan from creating those frustrating second chances that take up a full minute of game time. On Duke’s end, Mason Plumlee needs to function as a passing trigger point for the offensive flow, and Andre Dawkins needs to make his presence felt on the perimeter. Michigan, quite simply, needs to make its shots. Trey Burke will have more pressure and trouble at the point than he’s experienced all season, and if players like Zack Novak don’t lighten his load by hitting a few bombs, it could be a long night.

It’s hard to imagine UCLA, a team that seems to be in tatters, winning this game. Reeves Nelson should play more than eleven minutes for UCLA, but the Kansas pressure that held Georgetown to a mediocre shooting night should be well matched against a team that shot 17% from behind the arc in losses against Loyola-Marymount and Middle Tennessee. The match-up to watch here is the Wear twins and Nelson against Thomas Robinson. The only slim chance the Bruins have is to contain the big man and hope the guards can find some way around Kansas’ pressure.

The picks today are Memphis, Georgetown, Duke, and Kansas. And seven goofy grins from someone named Plumlee.