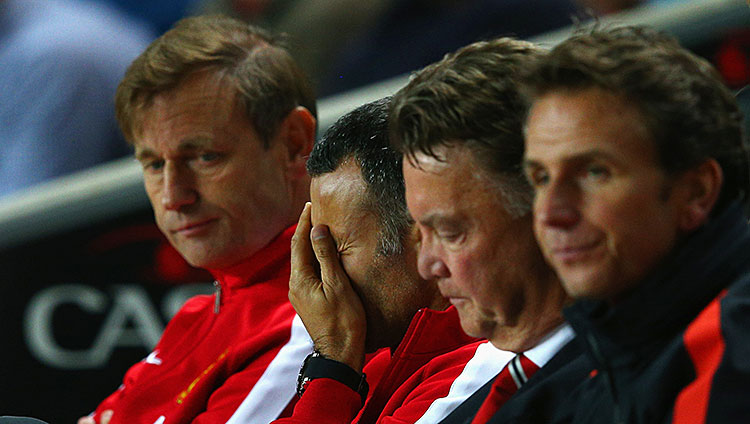 You may or may not have noticed, but Manchester United are broken. MK Dons noticed, handing Louis van Gaal the third embarrassing result of his tenure, when they whacked a mostly backup United team 4-0 in the Capital One Cup (a.k.a. the League Cup). Mostly backup United teams consist of expensive players like Shinji Kagawa and Javier Hernández and highly touted prospects like Michael Keane, Nick Powell, and Reece James. And again, they lost to a League One side. Things are not good.

This shouldn’t come as a surprise, though (although maybe the extremity of this last result should). It is, in fact, the entire reason Louis van Gaal is at United. Four months ago, everybody understood that. United were finishing a disastrous season in seventh place, David Moyes was on his way out, and manager van Gaal was going to come in and turn things around when he was done at the World Cup. Then the summer happened.

Van Gaal, whose Netherlands squad wasn’t even supposed to get out of its group, waltzed triumphantly to a third-place finish in Brazil. The Netherlands were supposed to be bad, but then they were good. Immediately! Because of van Gaal! I wonder what other team that was bad might want to immediately become good because of van Gaal? One strong if meaningless preseason tour in America later, and United had undergone an expectations face-lift. When the season started, van Gaal’s arrival was no longer the beginning of the process; it was the end. He wasn’t at United to fix things; things were fixed because he was at United.

Unfortunately for United fans, that is not the way it works. Firing David Moyes was an admission that the Scottish manager wasn’t the right man to solve the club’s problems. That’s different from saying that David Moyes was United’s problem.

Louis van Gaal is at United because he’s better suited to the job than David Moyes was. The squad has talented young players coming through the system. Van Gaal has experience working with young guys at the highest level. Moyes tended to prefer veterans.

The team needed to get more from its handful of stars. Van Gaal has experience working with big names and bigger egos. The team needed a tactical approach, tailor-made for its personnel. Van Gaal has a history of joining teams and molding them together. Moyes, at least at Everton, wanted his players to play one way or off they went (much like Sir Alex Ferguson at United, which explains part of the appeal). In all those ways, van Gaal is the right man.

But you can’t solve a club’s problems just by showing up. Young players improve over the course of a season. Veterans, being asked to play in a new system, improve over a bit of time. New signings come in, dead weight goes out. And when the front office pays a record fee for a player, hopefully it’s one who fills a need. Ángel Di María is wonderful, and very expensive, but I’m not sure he answers any of the questions people have been asking of United. That’s to say nothing about how he might feel watching United get tooled up by a League One side.

How long should van Gaal have to turn the battleship around? There’s no easy answer, and the unit of measurement, be it weeks or months, or years, is up for debate. One thing’s for certain, though: He’s not going to do it just by showing up. Ultimately, van Gaal will be judged as a success or a failure based on how he heals this broken team. Four months without a United game that mattered might have made us all forget how big a job that is. Now, three games into the season, that reality is painfully clear.