Ma$e, Cookies, and Pain: Total Devastation for a Niners Fan at the Super Bowl 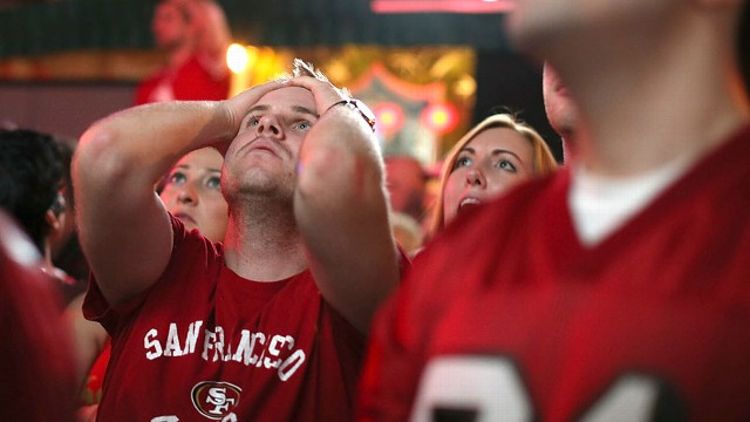 It all started with Ma$e.

I had just taken my seat on my flight from Atlanta to New Orleans, one of the few Niners fans on a plane where anyone wearing Ravens gear had been given a complimentary drink ticket, when a man wearing a red leather jacket and a different shade of red jeans sauntered up the aisle. He was carrying a red duffel bag. A meaningful percentage of his zippers were gold. He stopped at the row in front of me, looked up at his ticket, and sighed. It was Ma$e. He had been assigned a middle seat.

Was Ma$e — rapper, one-time pastor, Harlem World representer — a Niners fan? Was he wearing all red and gold everything just ’cause? Had he chosen the middle seat? I spent the flight admiring the sheen of his jacket through the gaps between seats, going so far as to shell out for in-flight WiFi to see if anyone else on the flight had Tweeted about seeing the rapper and one-time pastor. But nobody outside of the ground crew in New Orleans seemed interested in speculating about his interior life (“He ain’t need the money.” “I ain’t mad at him.”) and some middle-aged Ravens fans mistook him for an overly zealous San Franciscan. I rarely take surreptitious pictures of “celebrities” but Ma$e’s chosen look seemed significant. It had to mean something.

The Super Bowl is one of the few things that many Americans watch on TV at the same damn time, and in this way it’s supposed to be everything dramatic about sports — the pressure, the potential for legend, the all-together-now spectacle — distilled into one afternoon. Everything else about the “Super Bowl,” though, can be kind of a drag. From the comfort of home, the weeks leading up to the game are just annoying and silly, and after a while, you’ve memorized every human-interest story and heard all the funny outtakes from Media Day. From New Orleans itself, it’s slow and tedious, so full of things that make you forget why you’re there, outside of a vague, ambient sense of anticipation. You kill time until the event itself, when time will be precious and sweet. So there are parties and thousands of places/reasons to get a drink, jubilant group meals, and more drinking. It was all part celebration, part calming of nerves, and the default experience is surreal. I was waiting for a friend in the hotel lobby, and Patrick Willis walked by, barely taller than me. Later that day, I was at a party and I passed by J.J. Watt and his family of sentinels. I accidentally bumped into his father, and I thought the left side of my body was going to shatter.

I spent all week searching for omens. A guy in a Deion Sanders throwback walking down Canal Street, puffing a blunt so aromatic that everyone turned and admired it: “That’s that Northern Califoe-nia,” he purred. Hella good sign. A Ravens fan wearing a T-shirt with an Edgar Allen Poe reference. We’re going to lose. Cargo shorts/sweatpants and faded Flacco jerseys outnumbered head-to-toe red Suge Knight suits, 8-to-1, but I still took that as a positive. I listened to passionate debates about Ray Lewis’s bloody shirt and deer antlers and awesome legacy, Chris Culliver’s sins vs. Brendon Ayanbadejo’s saintliness, whether Bernard Pollard was actually the Predator, stories of Torrey Smith’s perseverance, the bravery of O.J. Brigance. We definitely couldn’t win the public-relations, human-interest angle. A baker has Ravens and Niners cookies: Which one to eat? The team you hope to “devour,” or the logo you want to look at on a plate? I fist-bumped a drunken man with his arm in a 49ers cast and was convinced we would win, but then a Ravens fan in a faded Flacco jersey and cargo shorts held a door open for me, and it was a wash. Niners owner John York stood by our bus, shaking hands with fans as we headed toward the game, and the spirit of Eddie DeBartolo enveloped the scene. “My ex-boyfriend was from Maryland, and he was a douchebag,” a bartender explained. “So I’m rooting for your team.” That’s a win.

The morning of the game, the 49ers’ friends and family congregated in a hotel ballroom for what was supposed to be a festive pregame brunch. A gospel choir sang songs of praise and victory, while families of players tried to enjoy slabs of bacon and fresh beignets. There were sugar cookies with the 49ers logo. It was clear who everyone was there to represent: a table of Kilgores, two tables of Iupatis, a few Chad Halls. The vibe was strangely solemn. Families seemed to just stare anxiously at their plates, presumably because their son/father/husband/brother/uncle/nephew/best friend was a few waking hours into the most important day of his life, the day all the extra lifting and film study and mysterious sprays had been building toward. A day not guaranteed to anyone. I was just a fan wandering around, picking pennies off the ground, looking for signs, patterns, messages.

I couldn’t help it. Fans can do no more than yell ourselves hoarse or wear lucky socks — it’s the only kind of “control” we exercise once we walk through the gates. Early on, the mojo seemed positive. We entered the Superdome behind Jeremy Renner. He was wearing a Niners cap and kept repeating to himself, “Let’s do it, man. Let’s do it.” Swagger was on a hundred thousand million when the team took the field to “California Love,” Tavares Gooden artificial turfing by himself. None of this mattered by the Ravens’ second possession, when Flacco scrambled out of pressure on third-and-long to heave one to Anquan Boldin. It was over.

The thing about being at a football game is that you realize how little actual football is played. There are TV timeouts, there’s nobody barraging you with replays or observations, there’s a lot of time to just stand there and wonder what’s going on as the rest of the world parses the last play in excruciating slow-mo. This sense of detachment is amplified at the Super Bowl, where all those multimillion-dollar commercials just mean more time for you to slip further and further into existential crisis. I would be lying if even the most superstitious, fatalistic part of me foresaw a 21-6 deficit going into halftime. Any dreams of a post-Beyoncé turnaround evaporated as soon as Jacoby Jones returned the second-half kickoff for a touchdown.

“This may be a sign,” someone joked once the lights went out. At the very least, it was a too-perfect metaphor for what had transpired thus far. The Niners’ sideline standing in semi-darkness, as Ed Reed pranced up and down his side of the field, pointing every which way, whipping his loyal Ravens fans into a frenzy. Third-and-long, down 22, marooned in this strange state of suspended agony as the majority of the Superdome goes supernova. I wondered if, in the context of a sporting event, it was possible to feel any lower.

Then, the near-impossible. The Niners started playing like themselves again. Tarell Brown stripping Ray Rice was one of the purest feelings of ecstasy I’ve ever had. Once the Niners cut it to 28-23, the P.A. played “Enter Sandman” — Metallica is sorta from San Francisco! — and one of my friends took it as a great sign. Three-quarters of the people I was at the game with had been procuring shots at one of the concession stands deep inside the Superdome when the 49ers comeback began. They were wise enough to recognize that, for the good of the team/our collective sanity/TV ratings, they had to watch the rest of the game on a monitor down there rather than in our seats, which were a few rows behind James Harden — in a gold Niners jacket — good omen! — and Shaq. (They also had to keep doing shots.) Even at 34-29, I felt OK. At least it wouldn’t come down to a David Akers field goal, an actual nightmare I’d had Wednesday night.

There was this feeling of inevitability in the fourth quarter. Maybe it was just the delirium that comes with feeling so low and then so high within the span of 30 minutes. Last year’s heartbreak at Candlestick never felt very high. As Frank Gore broke free and took it down to the 7, I was absolutely certain that the Niners would score and that the Bay Ballas remix of “I Got 5 on It” would spontaneously start playing. My worry was actually that there would be too much time left on the clock. I don’t know why I felt so certain. Maybe it was Tavares Gooden’s insatiable dancing, Ian Williams doing jumping jacks on the sideline. But it was not to be. My cap was resting at the wrong angle or maybe my friends had stopped doing shots. Obviously.

One final omen, with 1:42 left: As the Niners’ defense lined up, the possibility of some fluke turnover still intact, I watched as Aldon Smith bounced up and down, dancing along to “Gangnam Style.” He seemed so loose. I hoped this meant that he was going to do something phenomenal. He didn’t, and then, naturally, I stepped in some nachos. Maybe in the sobriety of next week, I’ll be able to appreciate what we were privileged enough to witness. The greatest comeback in Super Bowl history — almost. But in the moment, you want what you wanted when you were a kid, back before you knew what “quasi-militaristic” or “spectacle” or “brain trauma” or “shots! shots! shots!” meant. You just wanted a reason to fling your hat in the air and high-five anyone, everyone.

The game ended, and everyone filed out of the Superdome, headed back in the same direction toward the hotels. They had closed off the street to cars, so clusters of people — the majority ecstatically numb, the rest sad and shell-shocked — filed toward the lights. I felt like I was in the prequel to The Road. A guy playfully ribbed some despondent Niners fans before admitting he was actually a Mets-Knicks-Jets fan, so he can’t have felt that great. I got back to the hotel and found my friends. As we were waiting for an elevator, a man in a Ravens cap joked to his wife that, aw shucks, her purple cardigan had won them the game. She hadn’t even planned on wearing it today, but, boy, was she glad it had all worked out. They chuckled and we all got in the elevator. I stood next to her, silently studying the cardigan, its monogrammed initials, her husband’s cap. Games are won and lost by uncharacteristic penalties, special-teams lapses (108 yards!), baffling play calls on first-and-goal, heroic, “helmet catch”–status third-and-goal bombs, shrewdly ordering your punter to take a safety, refs looking the wrong way in a Super Bowl’s dying moments. Never anything as banal as choosing the rib sandwich (HOPR, salute) over a bowl of alligator parts or wearing the right or wrong sweater. The elevator was a contrast of moods. There were no words. A bottle of beer slipped from my friend Ben’s grasp, splashing us all, and narrowly missing the woman’s open purse. We got out on the 27th floor and I spent what little was left of my voice laughing all the way back to our room.

NFL Run & Shootaround: All of the Lights