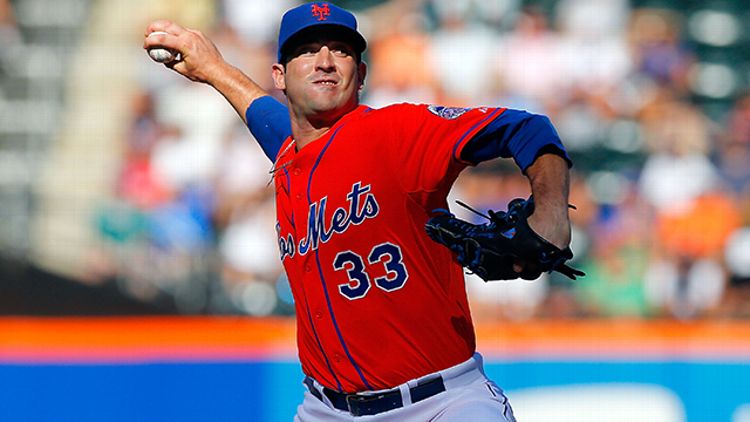 Matt Harvey is headed to the disabled list with a partially torn ulnar collateral ligament in his right elbow, wiping out the rest of this season, throwing next season into doubt, and likely derailing the Mets’ near-term hopes for contention.

The injury derailed Harvey’s first full season in the big leagues, one that established him as one of the best pitchers in the game. If resting the elbow doesn’t cut it, Harvey would face the prospect of Tommy John surgery, which might keep him off a major league mound until 2015. Given how good Harvey had become so quickly, how rough the past few years have been for the Mets, and what Harvey’s well-being means for one of the most downtrodden teams in baseball, it’s tough to see this as anything other than a crushing blow for everyone involved.

Except it doesn’t have to be that way. This isn’t going to be another bury-the-Mets opus in which we catalog everything from Bernie Madoff to Jason Bay to the sad end of Johan Santana’s career. This is a story of optimism, silver linings, and the miracles of medical science, about how sometimes shit happens, then everyone gets over it.

Contrary to some (misguided) Internet ramblings, the Mets didn’t do anything wrong here.

When something this dramatic happens, the natural impulse is to find a scapegoat. One Twitter naysayer wondered why the Mets would let Harvey throw 110 or more pitches in one-third of his starts this year, given the Mets have been out of the playoff race since, well, Opening Day, more or less. There were less-specific complaints (that I’m not going to link to) about the Mets being at fault … somehow.

If you dig deep enough, you can find a few warning signs. GM Sandy Alderson noted that Harvey had felt forearm pain “for some time now.” As ESPN Stats & Info notes, Harvey threw the hardest fastball, the hardest slider, and the hardest curveball of any qualified starting pitcher this year; the velocity on all three of those pitches had fallen in August, according to the excellent pitcher analysis site Brooks Baseball. Also per Brooks, Harvey’s vertical release point dipped this month. A sore forearm, diminished velocity, and lower release points can be red flags when it comes to potential injuries.

But if every pitcher shut it down every time he felt a twinge, lost a tick off his fastball, or dropped his arm by an inch or two, professional baseball would cease to exist. Harvey had posted a 2.97 ERA with a 27-to-2 strikeout-to-walk rate over five starts in August. Nine out of 26 starts with 110-plus pitches thrown is hardly excessive for a pitcher who’d thrown well enough to post double-digit complete games this season if the Mets had let him. With a cap of roughly 200 to 205 innings this year (210-215 at the absolute most), the Mets planned to shut Harvey down after four or five more starts anyway. There’s a balance to be struck between responsibly managing a young pitcher’s workload and letting him develop stamina, work deep into games, and figure out how to get out of jams. The Mets did fine on that front. But no matter how judicious a team might be, no matter how much of a physical specimen he might be, shit just happens.

Everyone thinks good mechanics prevent arm injury. Doesn't matter people. Either you get lucky or you don't.

Harvey might be best off getting the surgery over with sooner rather than later.

We’re not going to go too far in playing doctor here. Every pitcher is different, and we don’t know how “partially” torn Harvey’s UCL is. Still, just about any pitcher you can think of who had this injury has required Tommy John surgery at some point. Most pitchers, like the Dodgers’ Chad Billingsley, won’t make it more than a few months before being forced to go under the knife. Someone like Adam Wainwright, who pitched more than five years with a partial tear, is an extremely rare exception. Given that Harvey is just 24 years old, with multiple potential big years and massive potential earning power ahead of him, it makes lots of sense to get the procedure done in the near future.

Again, ask those who’ve either seen many teammates and rivals suffer the same injury and go in for Tommy John …

Name the last guy who was diagnosed with a partial UCL tear and did not have surgery, and pitched with any success?

… or experienced it themselves.

@BoogSciambi spend all that time to rehab partial tear when possibly needing TJ after anyways? Get it done. :)

Daniel Hudson has some words of advice for Matt Harvey

In 2011, Hudson established himself as one of the best young pitchers in the majors, firing 222 innings with a 3.49 ERA and 3.28 FIP. Then came 2012, when everything that could’ve gone wrong did. After just three starts last year, he hit the DL with a right shoulder injury. He returned a few weeks later and struggled over six more starts, exiting his final appearance after tossing just 1⅔ innings. Turned out he’d suffered a complete tear of his UCL. Two weeks later, Hudson went in for Tommy John surgery of his own. He made solid progress over the next few months, prompting the doctors to give him the green light on stepping up his rehab. Then in the cruelest of twists, he snapped his UCL yet again in February, reverting him back to square one.

Before the Diamondbacks took the field against the Padres Monday night, I had a chance to talk with Hudson, who shared his thoughts on the emotional rigors of the landmark surgery, and the advice he’d impart to Harvey as he starts his own healing process.

Like I said, I’d never wish the rehab process on my worst enemy. It’s the mental toll for the most part, knowing that you won’t pitch in a major league game for 12 months. This time of year, down the stretch, maybe heading toward the playoffs, knowing you can’t contribute, that’s the worst. Knowing that just a few days or a few weeks before, you were healthy and pitching. When I heard about him, especially after it happened to me a second time, I just cringed.

The first four months are the most tedious milestones you can think of. Stuff like just being able to stretch your arm completely out without it being sore or tight. Then you get the go-ahead to start running. That’s the kind of stuff you have to look forward to. That’s it. It does get better after that, though. The first time I had surgery, I played catch at 4½ months. The whole process starts to move a little bit quicker after that. I got to go in today and lift five-pound weights, three sets of 10. It gets better.

You want that support system. Every team does it differently. The Dodgers, I know every single one of their guys on the DL travels with them. For us, I come in and rehab with the head trainer when the team’s at home. Then I drive up and work with our minor league coordinator at our spring training complex. The Mets are a little different, they’re down in Port St. Lucie. [Pirates right-hander] Charlie Morton was down in Bradenton the whole time when he was rehabbing. If [Harvey] does have the surgery, he’ll figure out a routine that works for him.

The reason I know about Charlie, we have the same agent. He had surgery last year a couple weeks before me, so he made a point to tell our agent, “If he has any questions, just ask.” But beyond that, it almost feels kind of like a club. It’s not a great club to be in, but there are guys you can talk to. Brett Anderson and I follow each other on Twitter. I asked him a question [about his own Tommy John surgery and rehab, and] he answered me right away. That’s the thing. There’s no reason for pitchers who’ve been through this not to share, and try to help. No one has been standoffish.

It helps to have a strong supporting cast around. Sometimes you need to be able to empty your mind and vent to friends and family. You have good days and bad days. I don’t know Matt, but one thing I would say to him is that you’ll be presented with opportunities to go do things. And you always have to ask, “Is it smart for me to do this, or should I be patient?” Because you’ll always have some free time on your hands as you go through it. You just have to follow doctors’ advice, rehab at the right speed, and be patient.

There are plenty of reasons to be optimistic.

Harvey is young and strong, with years of big performance likely still ahead. Whereas 50 years ago a torn UCL was usually a death sentence, today it’s a procedure done on hundreds of pitchers, with very a high success rate. If he does end up needing surgery, missing a year of action is never an ideal situation. But with the Mets still rebuilding, this is as good a time as any for an injury like this to happen. A year from now, two years from now, five and 10 years from now, this could all seem a distant memory — a minor speed bump in what could end up being a spectacular career.