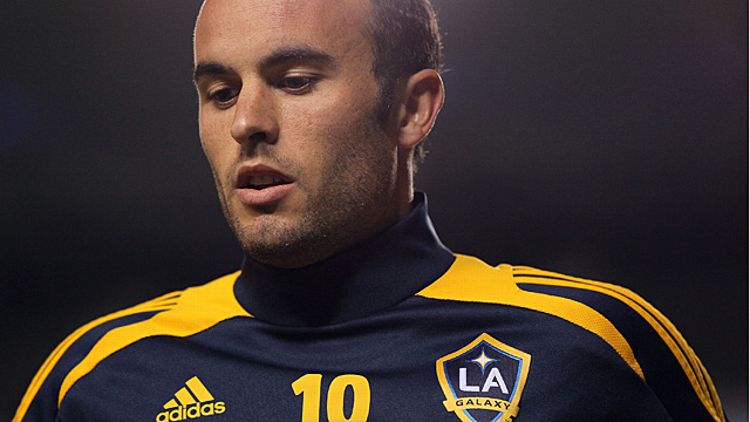 There’s a good chance that Wednesday night will be the last soccer game Landon Donovan plays for quite some time. His Los Angeles Galaxy find themselves down 1-0 after the first leg of the Western Conference semifinal against the San Jose Earthquakes. Unless they can go into Buck Shaw Stadium and get a result against the Supporters’ Shield winners, the season will end in less than 72 hours. And the Galaxy barely made it this far. For almost 70 minutes last Thursday night, there was a very real possibility the Galaxy would lose to an inferior Vancouver Whitecaps during Major League Soccer’s playoff play-in game. The defending MLS Cup champions were dominating the ball but not the scoreline. It looked like one of those matches in which the better side wasn’t going to win.

Donovan, 30, recently gave a couple of interviews in which he hinted at needing a long break following the MLS campaign. The brightest star in the American soccer landscape since he won the Golden Ball for being the best player at the 1999 U-17 World Cup, he also raised the possibility of retirement after the 2013 season. He’s physically exhausted from playing virtually nonstop for club(s) and country since 1999, and emotionally drained from promoting the game.

“I need time where I can just pause and breathe and rest, let me body heal, let my mind refresh,” Donovan told ESPN’s Julie Foudy in an interview. “I honestly don’t exactly know what the future holds, and I’m okay with that … I don’t feel any obligation to play, I don’t feel any responsibility to play. I’ve put in a lot to this whole thing. I’m proud of what I’ve done and what I’ve been a part of. But I can’t fake it.”

This has been an especially trying year and a half for Donovan. His body is breaking down in a way it never has during the rest of his remarkably injury-free career — the frustrating, nagging knocks that have caused him to miss 12 of the 20 United States games during Jurgen Klinsmann’s tenure. His influence on the Stars and Stripes is diminished, which concerns him.

“Candidly it’s pretty hurtful because I’ve spent more time on a soccer field than anybody in the history of this program,” said Donovan, the national team’s all-time leader in goals and assists. “I’ve played in games I shouldn’t be playing in for health reasons or otherwise. I feel like I’ve given a lot to this program, and when you get the sense that people think you’re not genuine, then that can hurt you.”

Klinsmann, whose sunny Californian attitude hides the discipline he enforces during national team camps, says he’ll talk to Donovan after the MLS season and that there’s a place for a healthy Donovan in the red, white, and blue. And there is.

But if the attacker retires in 2013, is it fair to blame him for leaving too early, to say that he could have done more? He played a huge role in getting the Americans to the quarterfinal of the 2002 World Cup, a tournament that for many (myself included) was an introduction to international soccer. He scored against Algeria in the 2010 World Cup, a goal that vaulted awareness to another level.

He shouldered plenty of blame for the failure in Germany in 2006, which still weighs upon him. He was the one out at promotional events while his lesser-known teammates were at home with their families. He helped build MLS to the point where it no longer needs him to be an ambassador. Donovan has benefited as well — the $2.4 million salary, the New York Post cover, the fame, the fortune — but that’s a lot of pressure for a lot of years for anyone.

Donovan has always been different from many professional athletes in that he’s not afraid to speak his mind when he does give interviews — which come less and less frequently — and that he will offer thoughts on topics other than the sport he plays. When the U.S. played in Honduras in 2009, he talked eloquently about the effect the ongoing coup was having on the country and its people. The Americans had just qualified for the World Cup, and there was Donovan in a corridor of the stadium in San Pedro Sula, expounding on the government of a Central American country. Nothing he said was brilliant, but he was articulate and clearly interested. It’s a big world out there, bigger than the sport that helped him see so much of it.

If injuries, pressure, the desire to disappear for a while, etc. combine to lead Donovan to retirement, so be it. He deserves that much. He’s given most of his body and soul to American soccer over the past decade and a half; let him keep what remains if he wants. It’s worth noting that the color man for the Vancouver match was Kyle Martino, a 31-year-old former prodigy who retired as result of injury. ESPN color man Taylor Twellman, 32, called the game against San Jose. The talented striker quit playing soccer after suffering repeated concussions. Donovan was blessed with durability and talent, but he did more than enough with those gifts.

Still, I don’t think the end is coming soon. There was a telling scene right after the halftime whistle blew last Thursday. Donovan, who thought (correctly) that he had been taken down in the box minutes before, was questioning referee Silviu Petrescu’s no-call. David Beckham and Robbie Keane — 2012 guaranteed compensation $4 million and $3.4 million, respectively — joined their teammate. The trio gestured for a spell before walking off the field together. The two international stars, players who wouldn’t be in MLS were it not at least in part for Donovan’s consistent and sustained effort to help grow the game, followed their captain into the Galaxy locker room.

After the break, Donovan and his troops came out even more determined to get a goal. Vancouver, led by the heroic efforts of goalkeeper Brad Knighton and the aerial prowess of center back Jay DeMerit, wouldn’t yield. Then, in the 69th minute, Mike Magee latched onto a Juninho cross and side-volleyed the ball into the back of the net. Donovan was the first man to reach Magee to celebrate.

Two minutes later, it was Landon’s turn to score. After Martin Bonjour dragged him down in the box, Donovan stepped to the spot like he’s done so many times before, squatted on the turf, and coolly converted the penalty kick. The Galaxy held on for the 2-1 victory. “Contrary to popular belief, I do still enjoy playing this game,” Donovan said after the win. Then, he presumably nodded good-bye to Beckham, Keane, and the rest of the MLS superteam he helped build and disappeared into the Los Angeles night, preparing to come back for at least two more games, probably many more.

Noah Davis (@noahedavis) is a freelance writer and deputy editor at AmericanSoccerNow.com.

Gerald Green Is Cleared for Takeoff