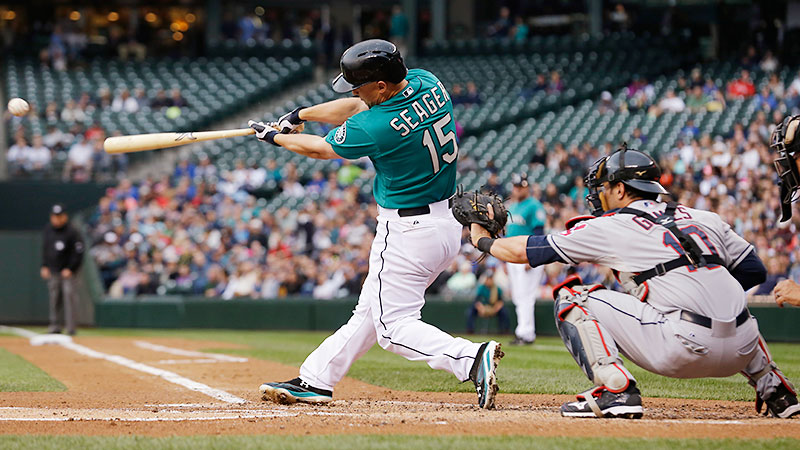 There’s a tired trope in romantic comedies: The leading man (or woman) bounces from dalliance to dalliance with a series of beautiful but ultimately disappointing people before eventually realizing that the steadfast best friend is his (or her) one true love. Jane Austen and Nora Ephron and others have reimagined it, and now so have the Seattle Mariners.

It’s staggering to consider how many “sure-thing” infield prospects the Mariners have brought up and then failed to develop in the past five years. They drafted North Carolina second baseman Dustin Ackley no. 2 overall in 2009, then took high school shortstop Nick Franklin 25 picks later. They traded for first baseman Justin Smoak in 2010, drafted Clemson shortstop Brad Miller in the second round in 2011, and traded for catcher and sometime first baseman Jesus Montero in January 2012.

All of them have disappointed at least to some degree, yet until about two months ago, all of them were more celebrated than Kyle Seager.

The American League, and the AL West in particular, is lousy with good third basemen, so you’re forgiven for not knowing that Seager has been one of the 20 or so best position players in the game this year, despite being terrible in April. He didn’t deliver his first home run until April 23, but since then, he’s hit .299/.358/.536 with 13 home runs and 17 doubles while playing his home games in a tough hitters’ park.

Seager has a history of holding his own against players from whom more is expected. In addition to being the only Mariner from the aforementioned group to reach his full potential, he’s been living in Ackley’s shadow since their UNC days.

Ackley was the clear no. 2 prospect going into the 2009 draft, and the only player who represented even a remote threat to Stephen Strasburg going no. 1 overall. Ackley hit .417/.517/.763 his junior year in Chapel Hill, the shining light on a team that went 48-18, reached the College World Series, and produced Matt Harvey and two other first-rounders in addition to Ackley.

Going back even further, Seager wasn’t even the best prospect in his own family. His younger brother Corey was the no. 18 overall pick in 2012 and has been a top-20 prospect in baseball ever since. Corey came of age in prospect circles just as Kyle was breaking in with the Mariners, and if we’re comparing the Seagers to great baseball families of the past, Kyle has always been more of a Mike Maddux or Vince DiMaggio than a Greg or a Joe.

Seager never made a top-100 list as a prospect, but he has always hit. After posting that preposterous junior year at Chapel Hill, Seager batted .345/.419/.503 in his first full season as a pro. He split the next year between Double-A and Triple-A and totaled a .333/.399/.495 line before getting called up, and he’s been the Mariners’ starting third baseman pretty much ever since.

He’s always played well. Seager was nearly a three-win player in 2012, his first full season in the big leagues. He was a three-plus-win player last year, and he’s at three wins and counting this season, before the All-Star break. He’s also a competent defender and baserunner, and at 26 he has the makings of a stalwart at third base for a Mariners franchise that’s produced a few good infielders over the past 20 years.

He’s also finally escaping the shadows: Ackley’s shadow, his brother’s shadow, and the obscurity of playing for an often bad team whose games don’t start until 10 p.m. on the East Coast.

The 49-41 Mariners aren’t bad right now, though, and Seager is a big reason why. We could call next week’s All-Star Game Seager’s coming-out party, but the truth is that Seager has been out for a while now, the steadiest stone in the Seattle franchise’s foundation. Other, sexier prospects have come and gone, but Seager has been there all along.