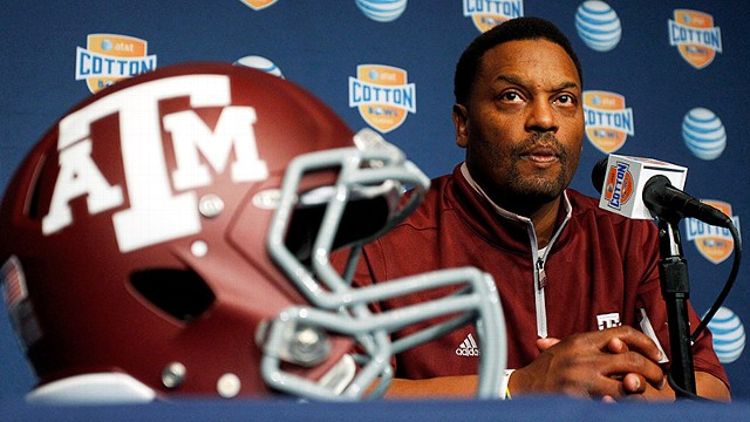 It’s tough to convey, in print and pixel, the gap between the contempt that greeted new Texas A&M head coach Kevin Sumlin at his first SEC Media Days appearance last year and the offense Sumlin actually committed, which for the record was “Showing up to SEC Media Days as head of a team that had the temerity to accept an invitation to join the SEC.”

Questions lobbed his way in a ballroom of 700 reporters ranged from flighty to outright condescending. We are almost positive somebody went so far as to ask him how he overcame being named “Kevin.” Our favorites, in no particular order, and his delightfully prophetic answers, in which the real difficulty now is not bolding everything for emphasis:

Even in the midst of you playing against Alabama, LSU, Arkansas, this is your first year in the SEC. What are your realistic expectations this year?

What is your assessment of playing in the SEC West this year, especially with this division producing the last three BCS national championships?

What’s my assessment?  It’s a pretty damn hard league. How is that? That’s my assessment. [Laughter.] I’ve been a part of some pretty fast football teams over the last few years. Our speed level at Texas A&M is pretty good.

What do you think are some perceptions or myths about Texas A&M that maybe you’d like to dispel?

You know, I don’t know. Perceptions or myths? I wish the perception was that we were damn good in football. I don’t know.

You obviously have proven to have great offenses from your Oklahoma and Houston days. Do you have to make any adjustments going against the SEC defenses?

Yeah, we need to be bigger and faster — how is that? — against the SEC defenses. I think we have gotten — people say we throw the ball all the time. That’s fine. I’d like for people to think that. That’s not necessarily the truth. Watching video doesn’t do it a lot of justice.  I see a bunch of people smiling.

Kevin, there’s been a buildup for months about joining the SEC. When you walk in a room, see all these people here, considering where you came from, does it make it real?

[Sumlin did dignify this with an answer. We will not.]

Are you always this laid-back, pretty cool guy?

[The transcript doesn’t catch this, but Sumlin’s actual response to this was to choke back laughter and fire back, “It’s summertime! We’re all right.”]

Sumlin, you might recall, would go on to an 11-2 season that included a road victory over Alabama and a walloping win over Oklahoma in the Cotton Bowl. And this summer — for after he is once again greeted with flat stares and eyebrows suspiciously raised for no goddamn reason, but presumably before he is asked, “Coach, talk about how blind squirrels sometimes find one or even two nuts but are definitely not championship-ready” — we have constructed this helpful, hopeful script for Sumlin’s next audience with the Southeastern Conference drive-time phalanx:

Kevin Sumlin enters a ballroom riding an actual elephant, wearing a bearskin cape. He hops down, flinging back the cloak and revealing he is entirely nude, save for a vintage houndstooth porkpie hat covering his crotch. No reference is made to his attire for the entirety of his Q&A. He hands an iPad to the moderator, who reads aloud a prepared statement indicating that Kevin Sumlin will be refusing to answer questions until all assembled agree to name Johnny Manziel the state bird of Alabama. (Those present readily agree, thinking now it would be socially acceptable to shoot the enemy quarterback and mount him as a trophy.)

His condition satisfied, Sumlin walks up the dais stairs limping, and stops at the mic to explain, “Excuse me; I’m sorry, but this is just weighing me down like you would not believe,” removes the Heisman Trophy from his shoulder bag, and sets it down next to his water glass. Before any reporter can get out a question: “It’s good to be back in Alabama. I enjoyed my last visit, too. Johnny Manziel’s here with me somewhere … you know, scrambling around by himself.

“But it’s good to be back. It’s tough being the third-longest tenured coach in the division — oh, Mullen’s still working? Wonders never cease. While I’m up here, any questions for AJ McCarron? Happy to intercept those. No? Would anyone like to ask about the spread offense not succeeding in the SEC?”

Sumlin then goes full Sheed, answering every question, none of them having anything to do with going undefeated, with a broad smile and some variation on this: “It’s incredibly difficult to go undefeated in this conference. Near impossible, I’d say.” He exits not out the side door the elephant entered, but down the front of the platform and through the crowd, distributing glossy 8-by-10 photographs of Mike Shula that he has autographed with his own name. Thus unburdened, he removes the houndstooth hat, placing it on his head and surveying the stunned crowd with polite interest before exiting.

About Last Night: Pittsburgh Gets Penned In